The episode picks up the morning after Marin is shot dead. Ambrose informs Heather that an eyewitness saw Marin in a struggle with an unknown man, while the medical examiner has concluded that Marin was holding the gun when it went off. Afterwards, Brick phones the detectives and says he’s found receipts for monthly payments made to Mosswood that were seized during the raid.

Down the road, authorities have surrounded a brown Volvo belonging to Vera. Ambrose refuses to wait for tactical and walks right up to the vehicle to find Vera’s ponytailed henchman behind the wheel. He’s merely a decoy sent to distract the police while Vera escapes with Julian to a friend’s Chinatown apartment. She intends to wait there until nightfall, then take Julian on a coach bus to god-knows-where. 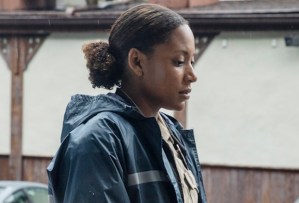 Back at Keller PD, Heather wants to question Vera’s henchman, but Captain Lidell sends her home. After Lidell returns to his office, Brick pulls Ambrose aside and says he found the Mosswood receipts tucked away in Lidell’s desk drawer. “Why would he sit on info like that?” Brick asks. “He can’t be with Mosswood. It doesn’t make sense.” Or does it?

Later that night, Heather shares a drink with Jack and discusses the latest developments in the case. Dad encourages her to spend the night and wash her dirtied uniform in the laundry room. We then cut back to Julian, who keeps reliving the previous night as he watched Marin die. In the flashback, Julian runs to hide before the unidentified man walks into the motel room and makes a phone call. He dials 9-1-1, puts the receiver down, turns on the lights and finds Julian. His face is not revealed. Then, back in the present, Vera apologizes to Julian for lying about Marin. She tells him they’ll soon be on their way to Pittsburgh, where they’ll stay with friends before permanently relocating to Washington.

Back at the precinct, Ambrose confronts Lidell about the payments, who reveals he knows more than he’s been letting on. He says he’s had a hunch, but wanted to confirm before speaking up. We then cut to Heather retrieving laundry from Jack’s dryer. While loading the clothes into a basket, a key to Marin’s motel room slips out of Jack’s pants pocket. (What?!) 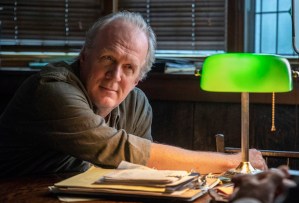 The following morning, Heather and Ambrose confront Jack, who refuses to say much of anything in front of his daughter. Once she steps outside, Jack explains to Ambrose that Marin called him asking for money. When he arrived at the motel, she said that she was taking Julian to Canada. Jack implied that it was a bad idea, then Marin pulled a gun on him. He grabbed her hand in an attempt to retrieve the weapon, which is when it went off, accidentally killing her. Afterwards, Jack took Julian to Vera.

It’s at this point that Ambrose confronts Jack with the receipts indicating recurring payments to Mosswood. Jack’s been sending money to Vera every month for the last 10 years. He’s Julian’s father! A flashback then reveals that Jack raped Marin when she was just a teenager. He came onto her when she was drunk, and when she insisted she wanted to leave, he pinned her down and had sex with her. That was the night Julian was conceived, making the troubled boy Heather’s half-brother.

Afterwards, Ambrose receives a phone call from Julian, who has doubts about leaving with Vera. Ambrose keeps Julian on the phone long enough for Brick to trace the call. Heather, meanwhile, goes in to question her own father. She says she always suspected something happened the night Marin was raped, but could never bring herself to talk about it. She asks Jack to explain himself, but there’s no excusing what he did.

Back in Chinatown, Vera gets new IDs made for herself and Julian. The surrogate mother and son then head back towards her friend’s apartment, only to discover the cops are waiting outside. They instead hide out in a nearby restaurant until their bus arrives, but Julian says he doesn’t want to go. Vera says it’s too late to change his mind, but he insists on returning to Keller. She tells him he’ll be put in a foster home and she’ll no longer be able to raise him, but none of that matters. His mind is already made up. Vera’s heartbroken, but accepts his decision. And so, they confront the cops and return to Keller. While Julian speaks privately with Ambrose, Vera recalls a mother-son nature walk, where she first revealed to Julian the dangers of jimsonweed.

Some time later, Vera sets fire to Mosswood. She also burns all but one of her recorded therapy sessions. We then cut to Ambrose, who returns to the Rockford Lodge and finds the singular recording waiting for him. It’s a mini-cassette containing his forgotten night with Vera. Another flashback reveals that the session ended with her strangling him to the point of passing out. That’s why he woke up the following morning with no recollection of how he got back to his room. 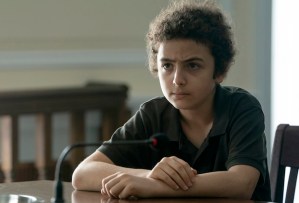 Later, we find Julian and his court-appointed attorney standing before a judge. Ambrose and Vera are there, too. After Ambrose speaks on Julian’s behalf, the judge rules that Julian will be placed in the custody of Social Services and spend the next four years in a group home for troubled youths. Meanwhile, Ambrose has had all charges against Vera dropped.

As the hour draws to a close, Vera walks through the scorched grounds of Mosswood. All that remains is that giant rock that stood in the middle of the barn. Julian, meanwhile, finally makes his way to Niagara Falls with Ambrose and his half-sister Heather. The end.

What did you think of The Sinner Season 2? Having now seen it all, would you say it was an improvement on Season 1? Weigh in via the following polls, then drop a comment below.