Zane Specter Litt experienced another shake-up among its ranks during Suits‘ midseason finale on Wednesday.

Faced with a potential civil war within the firm, Donna convinced everyone to accept Louis — who had just found out that he’s going to be a father — as managing partner. The new boss’ first order of business? Making both Alex and Samantha name partner to keep the battle from tearing the firm apart.

TVLINE | Louis has wanted, in the past, to be managing partner. Now he has the position, but it comes at a time when his focus is on fatherhood. How much is he going to embrace the job?
Just when he makes the decision to take a step back from work and be willing to step down when he finds out he’s going to have a baby, Donna comes to him and says he needs to take over. I love the irony of that in the finale. But once he agrees to take the job, he’s going to have to deal with: What’s his first day going to be like? He’s nervous. He’s going to want to do a good job. We pick up, as we usually do, right after, so the baby isn’t going to come for another nine months. He doesn’t necessarily have too many conflicts in terms of raising the baby right at the moment. So his focus is more on: What’s he going to be like as managing partner? … Sometimes when you’re given the opportunity to take the wheel, all of a sudden, the responsibility of it and the weight of it can hit you. That’s part of what’s going to be happening with Louis. He didn’t want this thing for a while, and now that he has it, he might even be a little afraid of it — or at least afraid of failing at it. 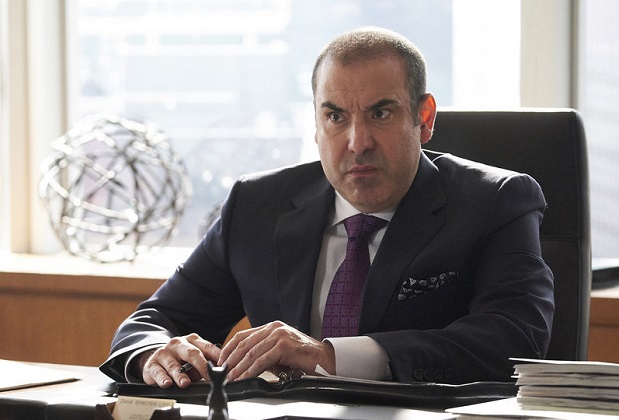 TVLINE | What does the firm look like under Louis’ control? Do other people accept his authority?
There’s definitely going to be a process of people accepting his leadership. It started in [Episode] 810. In the end, Harvey does accept it. But in life and definitely in Suits, it’s always like a “two steps forward, one step backwards” situation. At least the first two episodes [of Season 8B] are very much focusing on people’s acceptance of it, and that is including Harvey, Zane [and] Donna.

Donna and Louis have some sort of working-out to do, because in a sense, Donna is the one that engineered this thing. So Donna feels somewhat responsible for putting Louis in charge, and therefore, like Louis, feels a burden of responsibility to make sure it goes well. It might be the first time we see Donna overreacting to that feeling of responsibility. She’s joking with Harvey at the end of [Episode] 10 about being the real managing partner, but part of her really does feel responsible for putting Louis in there and doesn’t want him to mess up, and maybe isn’t giving him enough [of a] chance to find his way.

TVLINE | Who has the most difficult time accepting Louis as managing partner? Who does Louis butt heads with most?
I don’t think I have to answer that question, Vlada. I think you know the answer to that question. His name is Harvey Reginald Specter. [Laughs] [Episode] 811, honestly, it’s as much Donna as it is Harvey. It’s probably a little bit more Harvey, but it is Donna. But then in [Episode] 812, it really, again, is Harvey and Louis, and it’s got some good classic Harvey and Louis stuff, but with a twist, because Louis is the one who’s managing partner. 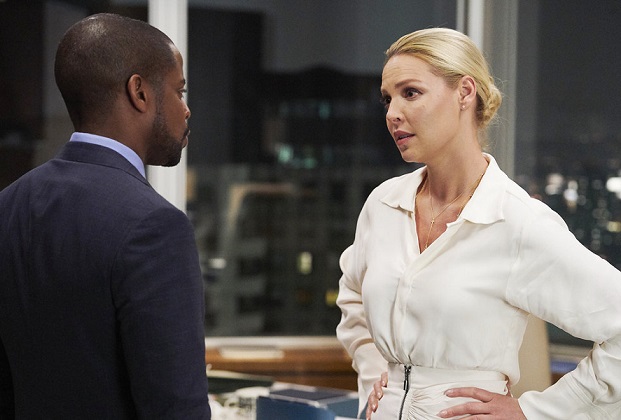 TVLINE | Are Alex and Samantha truly OK with this arrangement where they both become name partner? Or will we see more tension between them next season?
Very little bit of tension between them. I really liked the way Katherine Heigl played the moment when she accepts Alex and says, “It’s your call, partner.” But she was clearly struggling with it, which I liked. I saw her vulnerability, but I felt like she was, in good faith, accepting it. There’s a very small amount of adjustment period. She’s actually, surprisingly, in [Episode] 811, going to have a problem with someone else in the firm that is not Alex. But they will make it through it in the end and end up being closer. And then in [Episode] 812, Alex and Samantha have another story that does not focus on them being at odds over the name stuff. It just deepens their relationship a little bit more.

TVLINE | Last time we talked, you said the back half of the season is when you get more into the personal lives of the characters. Anything you can share on that front?
We will continue the Katrina/Brian dance that we’ve been doing. The big thing is, we will be delving a little more into Donna’s personal life in the back six [episodes].

TVLINE | Burning question: Is Harvey still seeing Louis’ therapist?
[Laughs] The short answer is no, not in my mind. It’s possible that, in the future, we could reveal that he has been, or separately, that he does [see him]. We have talked about him calling Lipschitz up again for something that he needs help with. But as of right now, through at least the first two [episodes of Season 8B], we do not have him going to see Lipschitz.

Suits fans, what did you think of the midseason finale? Grade it via the poll below, then hit the comments to back up your pick!