Despite the excessive amount of rubber used on Wednesday’s American Horror Story: Apocalypse, no one in Outpost 3 was safe. Langdon began the hour by literally unseating Venable at the head table, because just like his hair, Langdon’s actions are layered. He explained that he’s deciding who’s worthy of relocating to the “sanctuary,” where the Cooperative means to “populate” the new world. The process of making these difficult decisions is apparently called “cooperating.” (Sorry for all the quotation marks, but everything out of Langdon’s mouth is so damn creepy, I feel like these words deserve a little sparkle.)

Mr. Gallant was the first one to “cooperate” with Langdon, answering a wide range of questions, most of which were of a (gasp!) sexual nature. On American Horror Story. Can you believe it? Anyway, Gallant assured Langdon that, despite being gay, he totally boned a girl in high school. And they both finished, he thinks. But it turns out that sexual prowess — at least for the purposes of conception — isn’t an issue. No, Langdon was more interested in Gallant’s tumultuous relationship with his grandmother (“I hate her f–ing guts!”) as well as his diverse portfolio of sexual triggers. This conversation was so hot, in fact, that Gallant rushed off to his room for a good self-spanking, only to be joined by a most unexpected guest: Rubber Man! After expressing literally no objection whatsoever (“I’m yours — mind, body and f–ing soul!”), Gallant got down to business with his rubbery guest… unaware that an eavesdropping Evie had a front row seat to the whole show. 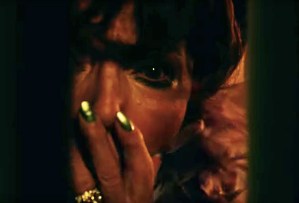 Venable’s interview with Langdon also took a ludicrously sexual turn, though I’m sorry to say that hers involved a lot more crying. After relaying a feel-good bedtime story about a young mother who begged him to put her dying child out of its misery, Langdon asked Venable to take off her clothes. (This guy is terrible at segues.) He said he wanted to see her deepest shame, “that part of you that humiliates you the most,” which turned out to be a painful issue with her back. With tears streaming down her face, Venerable asked, “Do I pass?” to which Langdon replied with a curt, heartless “no.”

Understandably pissed, Venable took out her frustration on Gallant, whipping him in the dungeon as he shrieked out the names of gay trailblazers from the ’70s and ’80s. (Basically, it was the most Ryan Murphy scene I can possibly imagine.) But the real pain came when Langdon entered the room. Not only did he deny being in the rubber suit, but he delivered this gutting speech to his face: “I wouldn’t f–k you if you were the last man on Earth, and you almost are. It’s not because you’re not physically attractive. It’s your neediness. What you need filled isn’t in your ass or in your face, it’s in your heart. You’re pathetic. I can see why your grandmother’s disgusted by you.” Damn, Antichrist, that was cold as hell.

And the insults didn’t stop there. Gallant had it out with his dear ol’ granny in the library, where she reminded him of his past indiscretions — three stints in rehab, an expensive team of lawyers to keep him out of jail, etc. — and how they’ve impacted her life. “One lifetime of mine is worth 50 of yours,” she said. “Humanity may be in a sorry state, but it deserves better than you.” Again, wow.

Gallant was reunited with the Rubber Man later on, but what began as another sexy encounter quickly turned into a damn nightmare, as Gallant stabbed his masked partner with scissors and showered in his blood. (Again, on this show? Color. Me. Shocked.) But even I was surprised by the big twist: Gallant wasn’t stabbing the Rubber Man at all — he’d been stabbing his grandmother. (R.I.P., Evie! At least we can take solace in knowing that Joan Collins plays multiple roles this season, ensuring that we’ll see her again soon enough.)

Meanwhile, Timothy and Emily stumbled upon an enlightening surprise: an e-mail on Langdon’s laptop expressing concern about Venable’s leadership. All of her “rules,” including the oh-so-popular sex policy, were apparently her own making; the Cooperative doesn’t give an eff if they eff. As you’d expect, Venable wasn’t thrilled about these sexy idiots challenging her authority, so it was off to the torture showers for them. Their struggle was mostly unsuccessful, but Timothy did manage to grab a gun and shoot Ms. Mead… who is actually… a robot? Guys, is she a robot?!

* About those snakes that came back to life after being cooked for dinner… What do we think is going on there? Did the Coven witches turn themselves into snakes in order to go underground and survive the blast? Is that completely insane? Is any theory insane with this show?

* Speaking of the witches, I feel like the promos keep baiting us with promises of their arrival. I wasn’t expecting them to play an enormous role in the season, but I thought we’d have seen them by now.

* There were some really exceptional burns in this episode, but my favorite was Venable’s complete dressing down of everyone at Outpost 3, including Coco, a “vacuous abomination of inbreeding. She’d be my last choice to propagate the human race.”

* Guys, I’m still not over this. Is Kathy Bates playing a robot this season?!

Your thoughts on this week’s Apocalypse? Drop ’em in a comment below.