TNT’s The Last Ship launched its fifth and final mission in grand fashion, rousing the heroes from a three-year recuperation period to thrust them into a new kind of war.

With Episode 2 of the farewell run airing this Sunday at 9/8c, TVLine invited series vet Travis Van Winkle to weigh in on Danny’s decisions (including the one that seems to have caused a rift with wife Kara), and ponder the heroic deaths to come.

TVLINE | I flippin’ loved last week’s season opener. It was so well done, it clearly established the narrative and stakes. Is the rest of this final season more of same?
This season is our grittiest season yet and I feel like the way the opener started out, leaving the audience with their mouths agape, each episode has a similar effect. I’m excited for our fans to see it, because it’s our biggest season yet.

TVLINE | Were you sad to good-bye to Danny’s beard?
No, believe it or not. [Laughs] I was excited to get that thing off my face.

TVLINE | I think the fans were referring to you and the fellas there as “ZZ Top.”
Well, we earned it.

TVLINE | Talk about Danny’s decision to send Delta Team (including Sasha, Azima and Wolf) south versus returning home. Is he feeling confident about that call?
I think it’s the only decision, and it’s the best decision — for the Nathan James and for the U.S. One thing about Danny this year…. All of us have grown weary of war. And yet destiny has other plans. We have a situation that is put in front of us, we are now deemed the bad guys, and we have to figure this s–t out. The decision that Danny made was, “Let’s see what we can do for our team back home.” The stakes this season are higher than they have ever been.

TVLINE | What sort of surprises await Delta Team in the jungle there? It looks like Danny runs into an old friend this week.
I do, I run into an old pal (Pablo, played by Major Crimes‘ Brandon Barash)….

TVLINE | What are the odds!
What are the odds! Every week, this season takes a lot of turns, and there’s not a lot I can say. But I do know that [showrunner] Steve Kane is steering this ship, and he has always got a trick up his sleeve. 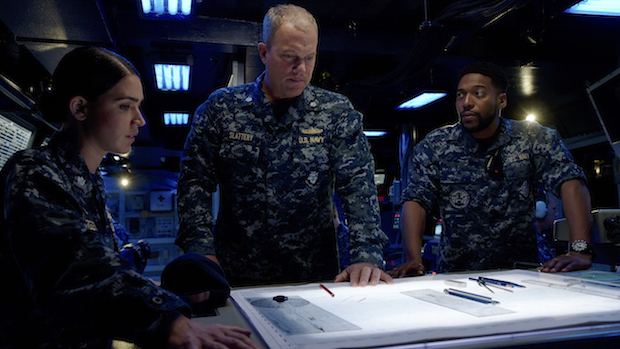 TVLINE | Kara (played by Marissa Neitling), in speaking to Chandler in the premiere, gave us a sense that things between her and Danny are… maybe not ideal.
I think that’s an accurate assessment. We’re going to for sure touch on that. War has made it tough for Danny to be a loving husband and father, since he pretty much always stays in warrior mode — and you find him in South America in warrior mode. That was a choice he made, and I don’t know if Kara agreed with it. And now we are in the aftermath of that decision. Right now, war is what’s in front of him, and he’ll take it.

TVLINE | But in her ideal world, Danny would have been there for the Fleet Week celebration at Mayport.
Yep, agreed.

TVLINE | Was there anything you got to do for the first time this season?
Yeah! I trained to do a Ranger roll. It’s a very simple but effective move that’s used a lot on the battlefield. It’s something I had to look up, figure out, get my body acquainted and use it. It was a lot of fun. 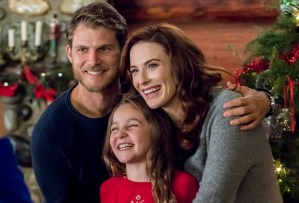 TVLINE | When I interviewed Bridget Regan last season, she had just booked the Hallmark Christmas movie. And when I checked in on casting for the leading man, lo and behold it was you. The fans got a kick out of that.
It’s hilarious. We had so much fun. She is one of my favorite people and I’m so happy to work with her in any aspect.

TVLINE | Jodie Turner-Smith (Azima) seems pretty cool, as well. Though I have yet to interview her.
She’s another one…. Now that the show is over, I’ve stayed in touch with Jodie, Bridget… a lot of the cast.

TVLINE | In The Last Ship‘s premiere, we lost as least Rios and quite possibly also Garnett in the premiere. Can we expect to say good-bye to more heroes this final season?
I will just say that in war there are unfortunate casualties. It’s just part of the game. That’s all I’ll say.

Want more scoop on The Last Ship, or for any other show? Email InsideLine@tvline.com and your question may be answered via Matt’s Inside Line.