The following recap, by the very definition of the word “recap,” contains spoilers from the Shooter series finale.

Shooter went out with many bangs — including a quite devastating one — as the USA Network drama wrapped its three-season run on Thursday night.

Picking right up where the Supreme Court building explosion left off, Isaac accompanied Nadine as she was whisked away in an ambulance, in “stable but bad” shape. Bob Lee, with Harris’ help, meanwhile sneaked inside the building to hunt down the Atlas operative behind the bus bomb, Jack Long. After finding Justice Gibson’s driver tied up in a men’s room, Bob Lee dashed outside and commandeered a police car, to follow the Secret Service detail to the Arlington building where Gibson and another justice were being kept safe.

There, Bob Lee used a highway fuse to blow up the cop car and create a distraction, and after KOing one Secret Service agent, he was inside. He instantly spied Jack Long hovering over the body of an agent he just skewered, but Long darted away, gun a-blazing. Other agents arrived to tend to their fallen colleague, only to heed Bob Lee’s warning not to too late. The man had been rigged with a grenade, which went boom and took out the agents.

Bob Lee raced downstairs to find Jack Long outside the safe room inside which the justices had been stowed. Just as Long hacked open the door, Gibson’s colleague bopped him with a fire extinguisher, giving Bob Lee enough of an upper hand to get a fight going while the justices escaped. Eventually, Bob Lee lobbed Long into the safe room, slammed closed the door and then detonates the suicide vest the baddie was wearing.

In the aftermath of the big win, Bob Lee checked in on Nadine, who with Isaac plans to launch a “good” version of Atlas, called Prometheus, while Harris, now POTUS’ Deputy Chief of Staff, handed Red Bama Sr. a resignation letter to sign. Met with predictable threats, Harris warned Red that the Dept. of Labor has been tasked with looking into undocumented workers at meatpacking plants — and they plan to dig as far back as 30 years. Red lobs another threat, but Harris scoffs: “You have no friends left.”

Bob Lee returns home hoping to convince Julie that his marriage and family are his focus now — but Julie doesn’t know how to trust his word anymore. For the time being, he asks her to help him pull together a burial service for Sam and his dad. But no sooner is that over than Red Sr. shows up and draws Bob Lee’s attention. Red Sr. is there to wave a white flag, saying, “You beat me…. I’m walking away.” Bob Lee advises him to walk straight on out of Texas and never come back. Red Sr. did his damage nonetheless, as Bob Lee turns to watch Julie driving away without him.

Bob Lee finds Julie back at the house, packing. “I haven’t changed,” he insists  — to which she counters, “I have!” She still loves him, she maintains, but “I don’t love this anymore.” As they agree to a “break,” with Bob Lee moving out of the house, we see Red Sr. selling off his holdings and funneling the money into a Caymans account, before tossing $100K at an assassin known as The Butcher. His target: “Whoever’s there” at the Swagger house, Red Sr. says. “No witnesses.” 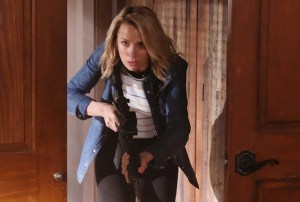 Bob Lee is telling Mary about her mom and dad’ “break” when the sheriff calls to say he spotted a low-flying helicopter heading toward his house. Bob Lee hands Mary off to the sis-in-law, grabs a rifle out of some good ol’ boy’s truck and makes tracks for his home, where The Butcher and six other gunmen are closing in from the hills. As they shower the house with automatic fire, Julie crouches and gets to the gun safe to arm herself. Bob Lee meanwhile creeps over the hill and begins picking off the gunmen. Julie at one point squares off with a baddie, and they each take a bullet. His, though, got stopped by a vest, and he is standing above Julie about to finish the job when she pulls the pistol from her waistband and shoots his [BLEEP] off.

The Butcher fires three grenades into the house, and Julie does her best to outrun their blasts, eventually seeking cover inside the bath tub. Bob Lee takes out The Butcher, then reunites with Julie. Apologies are being traded between husband and wife when a bullet zings through the window and into Julie’s neck, from the long gun of Red Sr. perched far away outside. As Julie bleeds out, Bob Lee bellows uncontrollably. 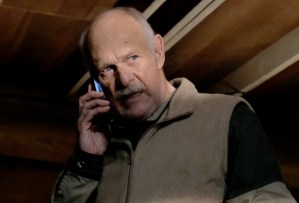 Nadine is at Prometheus with Isaac, discussing Bob Lee’s MIA status since Julie’s funeral, when Harris arrives for a visit. After Isaac excuses himself, Harris presents a “request” from the president, to look into a German nationalist who is helping ISIL and likely angling to be Chancellor. Nadine very begrudgingly agrees, but proceeds to conceal the sketchy assignment from Isaac….

Meanwhile in a very remote Canadian cabin, Red Sr. is boiling him some beef when his cell rings — and it can only be one person.

“I don’t suppose I can talk you out of this…,” he says, glancing out the window into the distance, where a far-away Bob Lee is in snow camo, locking in his target. “No, you can’t,” Bob Lee assures, as he delivers a bullet just below Red Sr.’s left eye. As a flood of memories of happy times with Julie wash over him — the kind you wouldn’t revisit if your wife had miraculously survived, and was being holed away somewhere — Bob Lee stands up, collects his stuff and marches off into the cold horizon.