Hulu’s summer trip to Castle Rock came to an end on Wednesday, as the Stephen King-inspired thriller wrapped its freshman season.

Seeing as the drama is an anthology series, with the recently announced Season 2 focusing on a different storyline and characters, Wednesday’s Season 1 finale was the show’s last chance to tie up loose ends for Henry, Molly and the rest of the town’s residents.

Did the episode deliver the closure for which you’d been hoping? Before you give us your thoughts on the finale, let’s revisit what went down:

Episode 10 picks up more or less where last week’s installment left us, after Bill Skarsgård’s Henry Deaver had explained to Molly that he isn’t an evil man — just a regular dude who stumbled into an alternate Castle Rock universe and now inexplicably wreaks havoc everywhere he goes. Y’know, the usual.

“To you, we’re strangers,” Henry — er, Henry One, as I’m going to call him — tells Molly. “But I’ve known you all my life.” He begs Molly to convince Henry Two — that is, André Holland’s version of the character — to go out into the woods with him that night and re-open whatever portal in time and space allowed Henry One to get to this alternate town in the first place.

Molly eventually gives in to Henry One’s pleas, asking, “What was I like over there?” His answer: “Happier.” (And that response seems to convince Molly even more that Henry One’s strange story of multiple universes is actually true.) 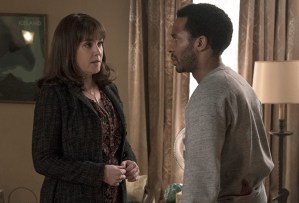 Meanwhile, Henry Two is still dealing with the police after bed and breakfast owner Gordon received an ax to the head. Henry Two gets a phone call that his mother, Ruth, is once again standing on a ledge and looks ready to jump into the town’s river — but when he drives off to find her, Henry Two’s car crashes due to a bizarre flurry of birds, not unlike the flocks that have been acting strangely all over town for days. Instead, Molly is the one to find Ruth, and she convinces the woman to step down from the ledge by revealing to her a truth from the alternate universe (though she wisely keeps the whole “alternate universe” part out of it): Even though Ruth might not know it, there was a time when Ruth actually did leave her husband and went to live with Alan, instead of just fantasizing about it. “First time you said that!” Ruth remarks, puzzled, and comes down from her perch.

Later, once Henry Two regains consciousness in his dinged-up car, he goes home to find that his mother is safe — and Molly is there, too, with some interesting news about Henry One. She fills him in on some of the details from Henry One’s story, including his hope that Henry Two will bring him to the woods that night and send him home for good. But Henry Two says there’s no way he’ll help Henry One, arguing that “someone always ends up dead in the woods.”

Ultimately, both Henrys end up in a holding cell at the Castle Rock police department: Henry Two winds up there because the police finally realized that he has been directly or tangentially involved in every strange event that’s been happening in the town for weeks (including the recent death of the deaf man in the woods); and Henry One ends up in the cell because… well, because Henry Two told the cops where they could find him.

Once the two men are in the same room, Henry One confesses that he’s afraid he’ll be stuck in this version of Castle Rock forever, and things will only get worse in the town if they run out of time to send him back home. Henry Two insists that he doesn’t believe the other man’s story… until Henry One proves it’s true by quoting the same passage from the Bible’s book of Romans that Henry Two’s father used to repeat to him when he was a boy.

Just then, right when it seems Henry Two could be coming around to Henry One’s story, a whole slew of Shawshank inmates walk into Henry One’s holding cell. (Long story short: Shawshank is being shut down, due to that whole thing where a man was kept in a water tank cage for years — but when the inmates’ bus was on its way out of Castle Rock to transfer them to a different prison, it ran right over Shawshank’s new warden, killing her instantly — and until they can board a new bus, the inmates have to stay at the CRPD.)

Seeing an opportunity to get out of the holding cell and get to the woods, Henry One taps into his evil side and causes havoc among the inmates and police officers, just as he had done a few weeks ago when he ruined a young boy’s birthday party. (I am still having nightmares about that chilling scene, FYI.) Within a few minutes, the inmates and cops have all killed one another — and when Henry One procures the keys to the holding cell, he and Henry Two walk outside to reveal that the entire town is in chaos. It wasn’t just the men in the cell who went berserk; it was everyone in Castle Rock except for the Henrys, and the town is a mess of car accidents, fires and murder.

“You did this,” a stunned Henry Two tells Henry One — and it seems that any interest Henry Two had in helping the other man has vanished, now that he’s seen the disasters Henry One can cause with hardly any effort. Still, Henry One leads Henry Two into the woods at gunpoint, hoping he can be sent back to the world he came from… to no avail. Even though Henry Two does hear the piercing noise that indicates an alternate universe is nearby, he doesn’t send Henry One anywhere — despite a stunning moment in which Henry One looks up from the ground, and his face is briefly very, very old, revealing his true age. 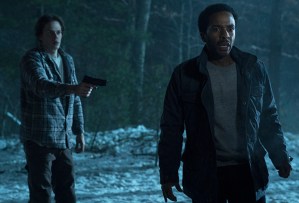 The next time we see the Castle Rock residents, it’s one year later. Molly has moved to Florida to sell real estate, after Henry Two had urged her to start a new life somewhere else. Ruth Deaver has died, and she’s buried next to Alan Pangborn at Harmony Hill Cemetery. And Henry One? Well, he’s back in that same cage, down in the water tank at Shawshank.

“Everyone in this town has some sin or regret, some cage of his own making. And a story — a sad one about how we got this way,” Henry Two says in a voiceover, as we see him making his way to Shawshank. “‘It wasn’t me, it was this place.’ That’s what we say. But that’s a story, too. It doesn’t change a thing. Maybe something turns you into a monster, or maybe you were one all along. Doesn’t matter. You’re here now. This is who you are. This is where you live. This is where you’re from.”

Henry Two visits Henry One down in the tank and presents him with food — clearly a regular routine for them now, as it was with Henry One and Warden Lacy for all those years. “I know you still have doubts, Henry. How long are we going to do this?” Henry One asks his jailer. “Don’t know,” Henry Two responds.

“After a while, you forget which side of the bars you’re on. That’s what Warden Lacy used to say,” Henry One tells the man, adding, “Look how things turned out for him.” Henry Two briefly pauses on his way out of the water tank, considering the prisoner’s words — then continues up the ladder and out of Shawshank without a response. As the camera pans across the bars of Henry One’s cage, he gives a sinister smile.

Other notable moments from the finale:

* In a bonus scene during the credits, Jackie Torrance reveals she has written a book about her experience murdering Gordon one year ago. In a nod to The Shining‘s Overlook Hotel (where her Uncle Jack did… well, you know), her book is titled Overlooked, and she’ll be heading out west to go on a research trip soon. “Best place to finish a book is where it started,” Jackie says, grinning. “I read that somewhere.”

* In the interest of tying up all loose ends, a flashback reveals to us that Henry Two was responsible for his father’s life-threatening injuries in the woods all those years ago, even though Molly was the one to actually kill the man. After being cornered by his father in the woods one afternoon, Henry intentionally pushed his dad off the side of a cliff… then vanished into an entirely different Castle Rock.

That’s a wrap on Season 1, Castle Rock fans! What did you think of the finale? Grade the episode in our poll below, then hit the comments with your reviews!