Billy Eichner’s character may not have survived the premiere of American Horror Story: Apocalypse, but at least he went out doing what Eichner loved most: screaming at people on the street. Then again, it’s not like he won’t have plenty of company in the afterlife — following a series of nuclear explosions across the globe, the planet’s remaining population is likely comparable to the size of an audience at a present-day Vanilla Ice concert. Bleak.

The few survivors of the nuclear winter have been shuttled off to Outposts, underground bunkers that — despite being crafted by some of the most advanced minds on the planet — look an awful lot like a nightmare version of Downton Abbey. Hell, “we dress for dinner” is even among the institution’s endless rules to live by, along with “no unauthorized copulation.” So… lots of fun.

Wednesday’s premiere dropped us into Outpost 3, where a “chosen” survivor named Timothy was taken by an organization known as “the Cooperative.” It seems that Timothy’s genetics, discovered through his profile on “an ancestry website,” are considered “ideal.” (Follow-up question: Are you now more or less likely to sign up for Ancestry.com? You just never know!) Anyway, Timothy was joined by fellow genetic lottery winner Emily, with whom he immediately began a well-disciplined affair (one kiss per week?!) to avoid raising suspicion. 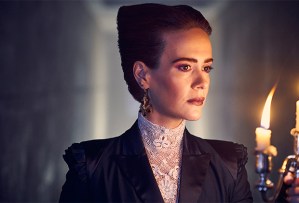 All this talk of “rules” brings us to Wilhelmina Venable (played by Sarah Paulson), the no-nonsense “face” of the Cooperative. A true boss in every twisted sense of the word, Wilhelmina — sorry, Miss Venable — exists above the Outpost’s color system, which divides its residents into either the purple group (“the elite, the worthy, those chosen to survive”) or the gray group (“worker ants” just grateful to be alive). Frankly, I’d be surprised if someone at BuzzFeed isn’t already crafting a quiz to help us figure out which color we’d be.

Other purples at Outpost 3 include extravagant hairdresser Mr. Gallant (Evan Peters), his grandmother Evie (Joan Collins) and Coco St. Pierre (Leslie Grossman), a billionaire heiress who just wants to be taken seriously… on Instagram. Also donning the royal color is celebrity Dinah Stevens (Adina Porter). There are others, but considering how quickly they’re dropping — one guy was literally served for dinner after being deemed “unclean” by the heartless Miriam Mead (Kathy Bates) — I don’t think we need to get too familiar. The most notable gray is Mallory (Billie Lourd), who worked as Coco’s personal assistant on the surface… and I’m not sure which was worse, that job or the actual apocalypse.

In true Horror Story fashion, the season’s first supernatural moment comes paired with the season’s first shower scene: After getting so fresh and so clean (clean), Timothy sees “666” written in the steam of his bathroom mirror as a haunting voice tells him to “beware.” Specifics would have been helpful, but given Timothy’s current predicament, it’s probably safe for him to just beware… everything? I sure as hell am.

The episode ended with Outpost 3 receiving a visit from Michael Langdon — yes, the same Michael Langdon we met as a baby during Murder House — who announced that a new facility, one with decades of supplies, was waiting for “those most worthy of survival.” And wouldn’t you know it, he gets to be the one who decides: everyone… or no one.

Your thoughts on the long-awaited premiere of Apocalypse? Grade the episode below, then drop a comment with your full review.