Julie Chen was a no-show for The Talk‘s Season 9 premiere — the day after husband Les Moonves’ firing from CBS — so that she could “be with [her] family” during this difficult time.

“I am taking a few days off from The Talk to be with my family,” Chen said in a statement released simultaneously with the daytime talker’s Season 9 launch. “I will be back soon and will see you Thursday night on Big Brother.”

Sharon Osbourne opened The Talk on Monday by saying, “It’s a bittersweet day,” marking Season 9 as they were in the immediate wake of the disruption in Chen’s life. “I’ve never been nervous in my life,” Osbourne said, “but I’m kind of very nervous right now,” seeing as she and the other co-hosts were about to “talk about something that affects everybody’s lives here at CBS,” where Moonves was CEO and chairman.

Moonves was removed from those top posts on Sunday after new allegations of sexual misconduct and assault surfaced. Any severance he may have coming is now in limbo as two independent parties investigate the claims for CBS, though at least $20 million of Moonves’ walk-away money has been earmarked for #MeToo-related charities/organizations. 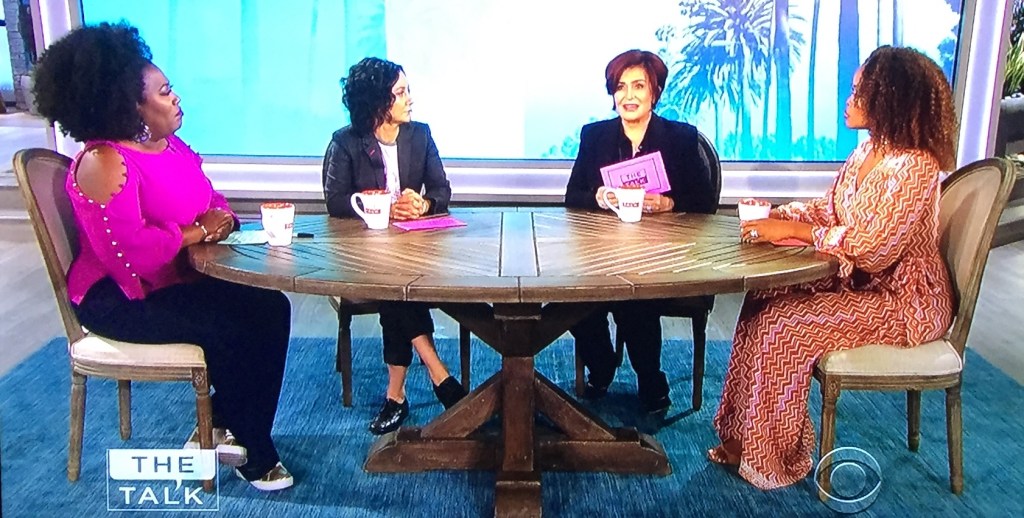 After explaining Chen’s absence from the premiere, the Talk co-hosts went about discussing the Moonves news. “It’s very embarrassing and upsetting to have to talk about [Julie’s] husband, but… we feel it’s right,” said Osbourne, who noted that she herself only knew the TV titan “in a superficial way.”

Osbourne said that back in July, she was asked to issue a statement in support of Moonves, but “after seven more women have come out… the pattern is so similar, that for me… obviously the man has a problem.”

Osbourne later added that one of the new allegations — from Phyllis Golden-Gottlieb, a TV exec who claims that Moonves forced her to perform oral sex on him back in the 1980s — “just broke my heart. And I dont care if it was… 20, 30 years ago, somebody that breaks somebody’s life like that has to be accountable.”

Sara Gilbert also chimed in, saying that while she loves and supports Chen “always,” “This is an important time in our culture. And just because this hits close to home, it doesn’t change this story. All women’s stories matter. This is very serious and the appropriate actions need to take place.”

Sheryl Underwood hailed Chen as a “strong” and “resilient” woman, then suggested that this scandal and other #MeToo revelations represent “a blessing from God, to be unburdened from secrets and unchained from lies. Now is the time for everyone to look inside themselves and be better people.”

In late July, in the immediate wake of the New Yorker‘s original expose of Moonves, Chen said in a statement, “I have known my husband, Leslie Moonves, since the late ‘90s, and I have been married to him for almost 14 years…. He has always been a kind, decent and moral human being. I fully support my husband and stand behind him.”

Chen let that statement stand during her first appearance on The Talk soon after that first beat in the scandal broke.