When it comes to stalking gorgeous blonde Manhattanites, Gossip Girl was only the beginning for Penn Badgley. The man formerly known as Dan Humphrey is back in Lifetime’s YOU, which premiered Sunday, playing an unassuming book store manager named Joe Goldberg. Of course, if we’ve learned anything from watching Lifetime for the past three decades, it’s that it’s always the unassuming ones you need to worry about.

Sunday’s premiere begins with a pretty standard meet cute: Joe comes to the aid of a lovely young college student named Beck (played by Once Upon a Time‘s Elizabeth Lail) who enters his book store in search of a novel by the late Paula Fox. As they exchange flirty quips and lingering glances, Joe and Beck seem to share a genuine connection, so no red flags are raised when he begins to engage in some light cyber stalking. In fact, Joe doesn’t even consider it stalking, as everything online — from Beck’s banal tweets about macaroni and cheese to her attention-seeking Instagram feed — is technically public. 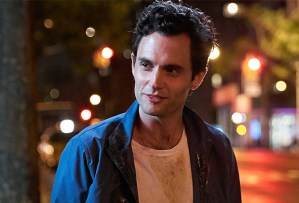 But here’s where things start to get creepy: Once Joe has thoroughly tracked Beck’s digital footprint, he starts tracking her actual footprint, somehow using a reverse Google Image search of Beck’s apartment to find her address. (We won’t bother getting into the questionable mechanics of that search, by the way. For the sake of this recap, let’s just pretend it’s totally possible to do that in Google.) Not only does Joe spy on Beck during an outing with her friends, but he also watches her have sex with her boyfriend from across the street, then masturbates behind a bush while she finishes the job herself. #romantic

Then comes Joe and Beck’s second meeting, which would be a much sweeter story if we hadn’t just seen him spanking it in public a few scenes earlier. Anyway, Joe follows Beck to an open mic night, which she totally bombs. (I feel for her, I really do, but can you blame the crowd for turning ugly? That poem was a downer.) A few drinks later, she stumbles into the subway and falls onto the tracks, presenting Joe with the perfect opportunity to play hero. And while I do applaud him for pulling Beck off the tracks, I also think he totally deserves to get puked on — which he does.

Joe takes Beck home to Benji, the “waste of hair” she calls a boyfriend, but he swipes her phone for some next-level stalking. He also reports a fake gas leak in Beck’s apartment when he knows she’ll be out, taking the opportunity to slip into her place to peruse her laptop — and, of course, to steal a pair of Beck’s panties. (There’s always a pair of panties. Why are stalkers so predictable?)

But Joe’s most horrific action isn’t taken until the end of the episode, when he poses as a New York Magazine writer to lure Beck’s boyfriend into “The Cage” — a cell in the basement of his book store where “collectibles” are kept — then beats him over the head with a mallet. (A freakin’ mallet! Who does this guy think he is, Bugs Bunny?)

* Joe’s obviously a violent pervert — on this much we can all agree — but is it possible he’s also… kind of a nice guy? I mean, anyone who would hand over a meatball sub to their sad young neighbor has to have some moral code, right? This is a meatball sub we’re talking about here, one of mankind’s most delicious creations. (Speaking of meatballs, is it bad that I can’t wait for Joe to murder the kid’s mom’s abusive boyfriend? You know it’s coming.) 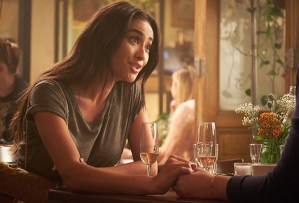 * Peach (Pretty Little Liars‘ Shay Mitchell) is clearly into Beck, right? Her offer of financial assistance doesn’t raise any suspicion, but the way Peach holds her hand when she says, “I’d do anything for you” is a little much. I’m a little worried about Joe making her a future target. (Hasn’t Emily Fields been stalked enough?!)

Time to weigh in: Did you enjoy your first night with Joe? Looking forward to more? Grade the series premiere below, then drop a comment with your full review.