TNT’s The Last Ship opened its fifth season with arguably its best premiere ever, as a new threat was unleashed and the upcoming final mission was made frightfully clear.

Picking up three years after the Red Rust famine problem was solved, we find Chandler now teaching at the Naval Academy in Annapolis, where an overachieving midshipman named Swain, armed as he is with theories on the next virus being cyber, is guaranteed to become a future asset. Before leaving class, Swain asks Chandler a question that clearly speaks to a restlessness within the global hero: “Without a war, what’s a warrior to do?”

Over at Cape Canaveral, Granderson arrives (after fielding a sweet video call from her girlfriend) just as Meylan and Jeter are readying to launch the reconstituted Navy fleet. Among the ships, Slattery is captaining the brand-new Michener (named after the fallen POTUS), while Kara has the comm aboard the Nathan James for this special day.

Sasha, Danny, Azima and Wolf, meanwhile, are slinking around Panama City, where they’ve managed to finagle tickets to a gala celebrating El Presidente. But to what end…? Before heading off to the gala, Sasha phones Tom, who’s in a bit of a funk after his son, Sam, moved out to go live with his sister, Ashley. Sasha does her best to reassure Tom, though, that “things are good,” finally, in their post-virus life.

Except things are about to get very bad.

Down in Colombia, some computer whiz kid meets up with a sketchy dude to hand off a flash drive, only to receive a bullet for his troubles. The guy then heads off to an Internet cafe, where he plugs the flash drive into a computer. Back in Florida, Chandler arrives at Mayport for a Fleet Week unveiling of the museum that has been erected within the Nathan James a la the Intrepid here in New York. After shooting a melancholy look at his framed blue camos, Tom reunites with Rios, Slattery, Kara, Miller and others. 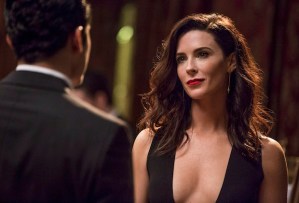 At the gala for the Panamanian president, we realize that Sasha & Co. are there to point out the holes in his security — not a good thing given the unrest that is going on, with a revolutionary named Gustavo currently making ominous waves. Shortly after El Presidente declines the their offer of help, he is assassinated, with Delta Team framed for the murder! Just then, the cyber attack is launched from the Colombian cafe, knocking out all electronics (radios, satellites, weapons aiming systems…) about the Navy ships and at the command center. Rendered blind, deaf and dumb, and in the midst of celebrations on one ship’s deck, the fleet is a sitting duck for a surprise, Pearl Harbor-like aerial assault. 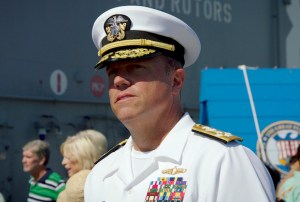 Garnett and then Rios are shot by the airplanes during the attack, though the latter’s fate seemed TBD to me…? Slattery and others get to manning 50-cals, while the James — which was out to sea, as part of a museum tour — smartly stays put, away from the melee. Chandler helps put an end to the aerial attack by way of a shoulder-fired missile, but so much damage has already done, with at least two ships sunk outright.

Back in Panama, a local kid who was helping out Sasha & Co. reports on the attack on the Navy. Danny decides that since they happen to be on the “front line” of this new war, they should not return home but continue south, to Colombia. Gustavo “Tavo” Barros, the aforementioned revolutionary, meanwhile puts the United States on notice that the united people of Central and South America will no longer “sit at the children’s table of international politics.” And if the USA chooses to fight, “You will lose.”

As Slattery and Burk head off to join Kara aboard the James (where Gator has also “re-upped”), Chandler stays at fleet command to coordinate the military response, as the situation and stakes for the final season are made crystal clear.

What did you think?