THE PERFORMANCE | As Issa settled into her new apartment and her new side gig as the complex’s manager — squirrels and all — Molly declared her BFF a “brand-new bitch.” But we hope that she’s never completely transformed, because we love the way Rae plays her namesake alter ego as is — with a knack for making punchlines of throwaway lines and a heart that beats too loudly for her to always listen to her head. Plus, who else could sing to their taco, “You are my greatest love,” and convince us that she meant it?

All that said, the Emmy nominee has made it hella rewarding to watch her character grow and learn from her mistakes in Season 3. When “Fresh-Like” sent “Party Lyft” on an impromptu first date with onetime fare Nathan, Rae not only taught a master class in fun, funny flirtation, she kept front and center Issa’s determination to be more than new, new-and-improved. So when the hottie asked about her last relationship, the actress wore Issa’s shame like a weight, even as she bravely put it right out there: She’d cheated.

After a crazy-romantic afternoon spent seeing possibility reflected in her date’s eyes, Issa returned the following day to her unsatisfying job at We Got Y’All and realized that — sorry, Frieda — she didn’t want to go back into the field, she wanted to walk out the door. As she did, Rae’s expression spoke volumes: Issa might not yet be a changed woman, but she was changing. And we were damn glad that the evolution would be televised. 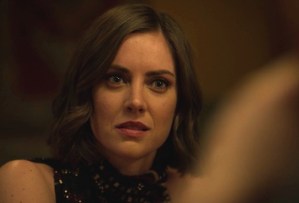 HONORABLE MENTION | We come to praise Jessica Stroup, but first some applause for Iron Fist‘s Colleen, who in Episode 3 interrupted the World’s Most Torturous Dinner Party to make everyone confess their agendas. Joy was first, quipping between wine sips, “[It’s not that] I have a problem with Danny as much as I have issues with everything that’s happened since he came back into my life.” Freed of having to skirt the truth, Stroup surfaced Joy’s fury over Danny concealing the fact that he father was alive. “How does someone make that choice?” she puzzled. Then when Joy learned that Ward set up this ‘breaking of bread’ only to be a no-show? “We’re not a family,” she corrected Danny, Stroup adopting a near-growl. “You and Ward conspired, behind my back. Something that seems to come so naturally to the two of you.” 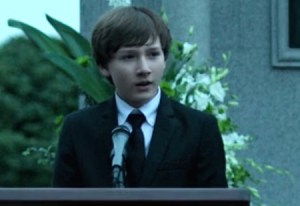 HONORABLE MENTION | In Ozark Season 2, Jonah Byrde evolves from a creepy kid obsessed with dead animals to a young man taking on adult responsibilities. This evolution is compelling to watch, thanks to the understated performance given by Skylar Gaertner. In Episode 6, Gaertner brought to Jonah a quiet confidence that’s important when making mature decisions — such as using stolen cartel money to open a bank account under an untraceable identity, and contacting Buddy’s friends to invite them to his funeral. At the funeral, Jonah gives restrained but heartfelt remarks about his deceased best friend, impressing everyone in attendance. It is Gaertner’s portrayal of Jonah that helps the character disregard his innocence and gain the fearlessness he needs to be involved in a treacherous adult business.

HONORABLE MENTION | Tuesday’s premiere of Mayans MC introduced a bevy of new characters to the Sons of Anarchy world, but none so immediately memorable as Danny Pino‘s ruthless cartel boss Miguel Galindo. Just moments into the FX drama’s first episode, Pino stole the show as Galindo strutted around his turf, icily daring any MC member to defy him. In one particularly brutal scene, an informant’s arm was severed from his body, and even then, we couldn’t take our eyes off Pino as his character relished the violence. (“That’s a very unpleasant way to lose weight,” Galindo deadpanned after the arm fell to the floor.) Galindo is certainly a monster, and we’re a little terrified to see what he’s capable of — but we’re equally as eager to see what Pino can do.