After this week’s Division Finals, NBC’s World of Dance has culled its elite crop to four contenders. For whom will you be rooting to walk away with the $1 million grand prize at the finals airing Wednesday, Sept. 12? 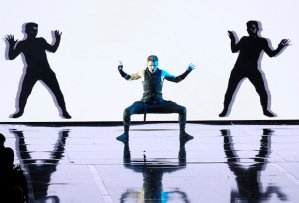 Opening the night, Michael Dameski came out on top in the Upper Division, with an average score of 97.8 (thanks to a perfect 100 from Ne-Yo and a pair of 98s from Derek Hough and guest judge Misty Copeland. Note to self: Find someone who looks at you the way Misty looks at a great dancer.) Placing in the division was Karen y Ricard, whose work was solid but perhaps too much of the same ol’ same ol, while Ashley and Zack‘s ambitious bit of silks work couldn’t keep them out of third place.

The Junior Team Division finals was, as the kids say, lit. The Lab, working with school desks and lobbing a bit of shade at their rivals, scored the easy win thanks to three perfect 100s, plus a 99 from Misty. The Fabulous Sisters placed second with a 92, followed closely by The Rock Company‘s 91.5. 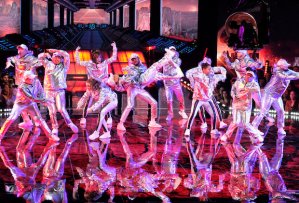 Though down a man (one crew member had torn his ACL and meniscus and thus was limited to standing with a crutch), The Ruggeds got the Upper Team Division final off to a solid start with a routine that involved a lot of clever lighting — throwing spots on individual crew members scattered across the floor. S-Rank, however, walked away with the win, by an average score of 94 to 91.5. Poreotics‘ routine I personally found quite mesmerizing — the piping on their costuming helped amplify the sense of movement, especially when they lined up behind one another and tried to make us feel wobbly. But an entirely superfluous flourish attempted by one crew member at the foot of the judges’ dais did not land well, costing them crucial points. 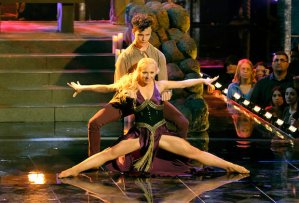 In the Junior Division finals, Jaxson‘s sheepishly charming personality wasn’t enough to compensate for a solid but “Wow!”-free routine that, as Jenna Dewan warned during practice, was light on the “flying” tricks that helped make his mark. Charity and Andres — though the former was performing with a broken big toe and as such had to switch her dominant foot — delivered a technically excellent performance and eked out the win over sweet-n-solid Sean and Kaycee, by a score of 93 to 92.3.

With the finals’ foursome now set, who will you be cheering on next week?