Given that Season 9 of The Walking Dead will be Andrew Lincoln’s last as Rick, you’d expect dark clouds to be hanging over the survivors pictured in the cast portraits released Wednesday by AMC. But on the contrary, the images paint a sunnier picture of the upcoming episodes, shedding bright light on everyone from Lincoln’s embattled protagonist to Norman Reedus’ stoic Daryl. (And just wait till you see what’s become of Eugene’s infamous mullet!)

Mind you, that’s not to say that Season 9 (which kicks off Sunday, Oct. 7) will be all campfires and sing-alongs. Per the show’s newly released logline, “Last season brought the culmination of ‘All Out War,’ which pitted Rick and his group of survivors against the Saviors and their cunning leader, Negan. With Negan’s life in his hands, Rick had a character-defining choice in front of him. By making the unilateral decision to spare Negan, Rick upheld the values his late son, Carl, championed in order to build for the future, but created conflict within his group.”

And that, it goes without saying, is just the beginning. “Now, we see our survivors a year and a half after the end of the war, rebuilding civilization under Rick’s steadfast leadership,” the release continues. “It is a time of relative peace among the communities as they work together, looking to the past to forge the future, but the world they knew is rapidly changing as man-made structures continue to degrade, and nature takes over, changing the landscape and creating new challenges for our survivors.

“As time passes, the communities confront unexpected obstacles, danger, and of course, walkers,” it goes on, “but nothing quite prepares them for the formidable force they are about to encounter, which threatens the very idea of civilization that our survivors have worked so hard to build.” (Translation: the Whisperers.)

Click on the gallery at right to check out the portraits or go here for direct access — and be sure to scroll down to see Season 9’s Rickcentric key art — then hit the comments. Do you read anything into the absence of a certain key character? 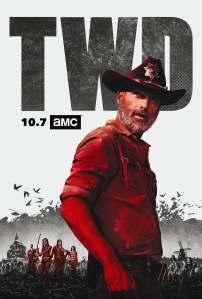