There’s a troubling trend on TV these days: shows that way overextend their storylines in order to fill out a full season’s worth of episodes. With Peak TV competing for our eyeballs by throwing hundreds of hours of TV at us, we’re facing an epidemic of storytelling bloat, and Hulu’s The First is just the latest glaring example. It’s a high-minded, immaculately shot drama that takes a potentially exciting premise — the first manned space mission to Mars — and stretches it to the point where all the excitement is slowly drained out of it.

Twenty years ago, The First — debuting Friday, Sept. 14; I’ve seen the first four episodes, and portions of the rest — would’ve been a perfectly fine mid-budget studio film that attracted some low-level Oscar buzz before settling into a row on Blockbuster’s new release wall. But those kinds of movies don’t exist anymore (it’s all cheap indies and comic-book blockbusters), so now it has to be an eight-hour TV series. It’s still just a two-hour story, though, so The First takes its sweet time, moving at a glacial pace and staying frustratingly earthbound. 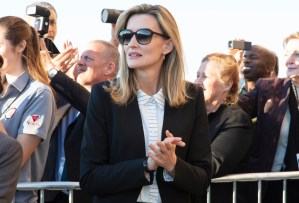 Oscar winner Sean Penn stars as Tom Hagerty, a former astronaut who once walked on the moon and now serves as a high-level NASA commander. He’s hired by Laz Ingram (Natascha McElhone), a filthy rich and grandly ambitious CEO who’s teaming with NASA to fund the first human mission to Mars. (We already know that the maiden voyage will end badly, though, because all of the astronauts are played by unknown actors.) When the initial effort predictably ends in disaster, Laz convinces Tom to climb inside the rocket himself for another try… even though he has plenty of issues down on Earth to deal with.

The First is visually slick, with an old-fashioned grandeur to it. Every frame is beautifully lit — kudos to director of photography Adam Stone — and the meditative piano score sets the mood nicely. (It’s set in the future, too, so we get to glimpse some cool sci-fi gadgets like hologram phones and driverless cars.) When it’s serving up awe-inspiring aerospace eye candy, or capturing the wide-eyed wonder of scientific discovery, it soars. But the more episodes I watched, the less I liked it. It’s ponderous, with lots of long silences and zero sense of narrative urgency. It asks us for a considerable amount of patience, and then doesn’t do much to reward it.

Creator Beau Willimon certainly knows how to pace a TV show with plenty of zip from his days on House of Cards — so what happened? At eight hours, the storytelling here is flabby and meandering. The premiere, while gorgeous to look at, could’ve been summed up in about ten minutes. And two episodes in, the show still hasn’t gotten around to nailing down its central premise. We all know where this is going — we’ve seen the trailer with Sean Penn in space — so why aren’t we there yet? Maybe it’s too expensive to film an eight-hour series of people in space… but c’mon! We’re here to see people in space, man! 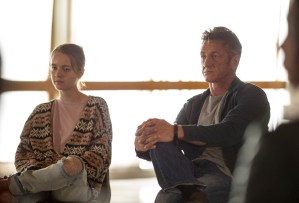 Penn is unquestionably a potent actor, and has some moments here, but his Tom is mostly subdued, leaving us on the outside looking in. (He also has a curiously ripped physique for a 58-year-old NASA commander. Was Neil Armstrong built like Wolverine?) There’s not a lot of character development beyond Tom and Laz, either. Tom’s fellow astronauts — played by familiar faces like Lisagay Hamilton, Keiko Agena and Hannah Ware — are thinly drawn, and the saga of his sullen, recovering-addict daughter Denise (Anna Jacoby-Heron) gave me serious Dana Brody vibes. (For those of you who don’t watch Homeland, that’s not a good thing.)

If you’re willing to stick around long enough to see Tom’s rocket head off to Mars, it does eventually happen… midway through the eighth and final episode. Now if the whole season were condensed down to fit into the premiere episode, with the rest of the season chronicling the years-long trip to Mars, The First might be worth your attention. But as is, it’s too much buildup for too little payoff. By the time the series is ready to launch, we’re already charting a course for somewhere else.

THE TVLINE BOTTOM LINE: The First is a gorgeously shot drama with an exciting premise, but it takes way too long to get anywhere worth going.