A tracksuit-clad Jimmy got his groove back (for a while, anyway) this week on Better Call Saul — but first, let’s check in on him at a different time, and with a different name… 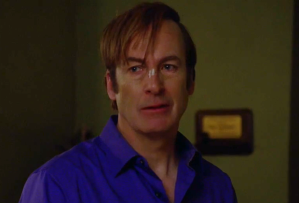 Yep, the opening scene puts us, for the first time, firmly in Breaking Bad‘s timeline, as Jimmy — er, Saul — frantically packs up his law office to flee while Francesca dutifully shreds a pile of incriminating documents. (This scene likely takes place sometime around the events of Season 5’s “Ozymandias,” if you’re keeping score at home.) After collecting rolls of cash from inside a ceiling tile and busting a hole in his U.S. Constitution wallpaper to retrieve his trusty shoebox, Saul instructs Francesca to dump the shredded documents “at least five miles from here, in separate Dumpsters” and hands her a roll of cash — and then another one, after she side-eyes him. “Quite a ride, huh?” he laughs, and offers her a hug, but she just leaves with the trash bags of shredded files. Saul calls for what sounds like a vacuum replacement part — really, the code for Ed the extractor — and then snaps his cell phone in half. 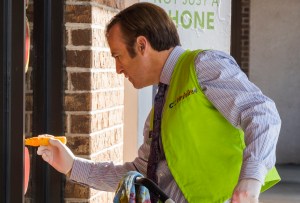 Back in the current Saul timeline, Jimmy is still killing time in the empty cell phone store when an actual customer enters, intrigued by the window’s promise of “privacy.” Jimmy launches into sales mode, suggesting the guy might want privacy from the IRS and advising him to practice “information hygiene,” handing him a phone that can’t be tracked. (When the guy asks how much, Jimmy replies, “Cheaper than an audit.”) He conspicuously stacks up a pile of phones marked “ON HOLD,” too: “People are gobbling these up like Tic Tacs.” He sends the guy out with an armful of phones, and the sale sets off another one of those Jimmy McGill light bulbs in his brain.

During a relaxing night in with Kim, he suddenly rushes out, telling her “there’s something I need to do at work.” He heads to the cell phone store, cranks out a bunch of phony receipts and leaves with a stack of burner phones in hand. Dressed in a gaudy tracksuit, he hits a local hot dog stand to the pulsing tune of The Crusaders’ “Street Life” and hawks his phones to the ne’er-do-well customers he finds there. He’s truly in his element, even managing to sell a few phones to a gang of biker toughs by saying they’re great for communicating with prison inmates. (They “can be hidden in any number of places.”) Just when he’s flush with victory, though, a group of teens jump him and beat him up, taking every last cent of his hard-earned cash.

As Kim helps Jimmy nurse his wounds back at home, he doesn’t tell her what he was up to, exactly, but he does have an unusually candid moment when he asks, “The hell’s the matter with me?” He promises to call the therapist that Kim recommended, and scrubs the “Privacy” ad off of the cell phone store’s windows the next day. But a run-in with a disheveled Howard at the courthouse seems to change his tune. Howard’s clearly still rattled by Chuck’s death, and when Jimmy suggests he see a shrink, Howard says he already is — twice a week. That convinces Jimmy to tear up his therapist’s business card, and sends him into his check-in meeting for his law license suspension with a newfound purpose. 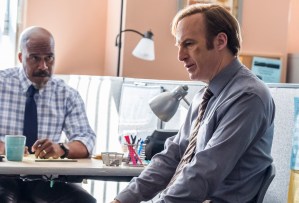 When the officer handling his check-in asks him what he’s going to do once his suspension is over, Jimmy assures him, “I have some plans.” He tells the guy he’s going to get his law license back, he’ll get a new office with Kim, and everything will be better than ever: “I’m gonna be a damn good lawyer, and people are gonna know about it.” Hmmm… by plastering his face and a catchy slogan on a bunch of billboards, maybe? 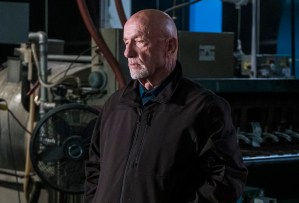 BACK TO THE LAB AGAIN | Mike’s story this week gives us the origin story for another familiar Breaking Bad location: the Superlab where Walt cooked his blue meth for Gus. Mike’s in charge of hiring a guy to discreetly construct a state-of-the-art chemistry lab underneath an industrial Laundromat, and his hiring process involves some light kidnapping. (He makes the bidders put on a hood and ride in the back of a cargo van so they can’t identify the location.) The first candidate seems ultra-professional, but after Mike gets a brief call from Gus, he’s curtly dismissed. The next guy seems to meet Gus’ criteria, even though (or maybe because) he admits the job will be “dangerous, difficult and very, very expensive.” Gus emerges from out of the darkness to greet him in German — and construction seems to be getting underway. 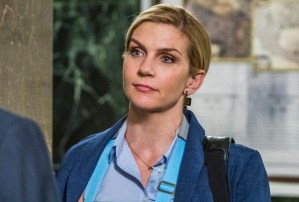 * Kim took on a few criminal defense cases this week, driving a hard bargain with prosecutor Bill to keep a young kid who threw a cinder block into a jewelry store window out of jail. (“My only other client is a bank,” she informed Bill. “I have all the time in the world.”) But she actually doesn’t, it turns out. While she was coaxing another client to show up for a hearing, Kim got a panicked call from Paige at Mesa Verde about an error in the paperwork. Needing to get her client to court, Kim hung up on Paige — but when she went to Mesa Verde to apologize, Paige made it clear that can’t happen again: “When we need you, we need you.” Will Kim end up dumping her big-money client to take on more fulfilling cases?

* The shiny purple shirt Saul was wearing in that opening scene: It was just so Saul, wasn’t it? And that bandage on his nose, of course, is a result of the savage beating he took from Jesse Pinkman in Season 5’s “Confessions.”

* Saul handed Francesca a business card for a lawyer, telling her to tell them “Jimmy sent you.” We didn’t see the name on the card, though. Could it be… Kim? Or even Howard, maybe?

* P.S. I got on the phone with Bob Odenkirk to talk about this week’s Saul scene and all things Better Call Saul, so head back to TVLine tomorrow to check it out.

* Another Breaking Bad cameo: The hot dog stand where Jimmy sold his phones is The Dog House, a known hangout of Jesse’s, and also seen in Saul‘s Season 2 episode “Fifi.”