John Krasinski, as Tom Clancy’s Jack Ryan, leaped into action this Friday with his first eight-episode mission for Amazon. Halfway through the already-renewed series’ freshman run, do we spy a new line of work for the onetime Office wonk?

Jack Ryan opens with the title character’s “meet cute”/near-collision with Jim Greer (The Wire‘s Wendell Pierce), the CIA vet who is about to be revealed as his new supervisor in a number-crunching, paper-pushing division. Greer, we learn through his “welcome back” from honcho Nathan Singer (Timothy Hutton, pulling from the weaselly corner of his repertoire), is rebounding from a disgraced period of his career. Hence, the low-profile assignment. But through Jack, Greer will soon enough find himself back in the game….

Based off an ongoing series of modest-sized, electronic cash payouts, Jack has been honing his oft-dismissed theory that there’s a rising, new threat in the Middle East — Suleiman, a terrorist who could become the next bin Laden and who is possibly plotting something big/deadly. Jack blurts out his theory at an agency meeting, and when it starts to gain some traction, Singer tries to box Greer out and bring the new kid onto his own team. Jack, though, rebuffs the overture, instead choosing to stick with Greer — and quietly work some leads with his boss.

Before you know it, Jack is being helicoptered away from a garden party (where his humble self had drawn the attention of epidemiologist Cathy Mueller, played by Abbie Cornish) and whisked to a CIA black site, where two persons of interest are being detained. Jack gets involved in the interrogation, just as Suleiman’s associates — including his brother Ali, who was sneaked inside the perimeter as a cadaver — launch an elaborate extraction. Gunplay ensues, and Jack winds up squaring off with Suleiman himself, who up to that point had been believed to be just a high-level bodyguard. 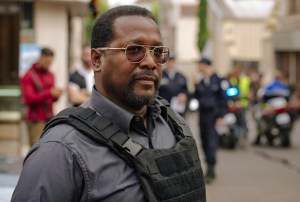 After Suleiman and his brother — the sole survivors of a long-ago U.S. attack on their childhood home — get away, the CIA goes about tracking the latter, with the help of French counterpart Sandrine Arnaud (Marie-Josée Croze). That leads to a very narrow escape when the team closes in on a lead, only to be met by a woman in a suicide vest. As Jack fruitlessly chases after Ali down the street, the apartment blows up behind him, but Greer and Arnaud escape injury.

Suleiman meanwhile has returned home to his compound, where his seemingly dutiful (but actually tremendously wary) wife Hani is plotting an escape for her and their children, using fake passports. But in a harrowing sequence, over a game of Monopoly no less, Suleiman quietly reveals that he knows of her plan. Hani nonetheless attempts an escape that night, with two of her three kids. Her son refuses to participate and instead runs to alert his father. Hani and the girls manage to drive off into the night, only to have their car conk out by morning. After hoofing it the rest of the way into town, they are trying, with little success, to get a taxi to the border just as Suleiman’s men arrive and spot them.

One of the men heatedly chases after Hani, with the intention of raping her. But rather miraculously, an American drone is surveying that remote town at the time. Defying an order to stand down, one of the drone pilots — who in an earlier sequences figured into a rather random, casino hotel three-way with a super-sketchy couple! — launches a strike at the site of the near-assault, freeing Han to escape with her daughters using the gunmen’s vehicle.

In Episode 4, Jack and Arnaud, in the course of following (but losing) Ali on some snowy roads in the French Alps, pull over for fuel. After Arnaud ducks inside the mobile mart, Jack comes to realize that the other car pulled up to the pump is likely Ali’s. Emerging from the men’s room, Ali goes to shoot Jack when Arnaud arrives outside and intervenes. Dashing outside, a local lawman reactively shoots Arnaud; he in turn gets gunned down by Ali, who darts across the highway and into the woods. At wounded Arnaud’s urging, Jack gives chase, facing off with Ali in a remote barn. After a scuffle, Jack gains the upper hand and trains his gun on Ali, demanding to know the site of the planned attack. But when Ali goes to reach for a weapon, Jack shoots him dead. Returning to the filling station, Jack discovers that Arnaud died from her gunshot.

As Jack and Greer head back to the States (where a properly distracting first date with Cathy awaits Mr. Ryan), Suleiman meets with and cleverly overthrows the region’s warlord, making off with a group of Westerners that had been held captive. He then returns to his compound with his expanded army, where he delivers a rallying cry to establish a new Islamic power. Later in Paris, the funeral service for a clergyman is revealed to be the target for a chemical weapon attack, as three terrorists dressed as clergy leave behind and activate gas canisters, locking the gasping, collapsing mourners inside.

What’s your early take on Amazon’s Oprah Winfrey Presents Tyler Perry’s Tom Clancy’s Ruth’s Chris Jack Ryan? And do you plan to finish up the season, knowing that production on a second season is already underway?