Fans of both Hawaii Five-0 and Hawaii Five-O are due for some déja vu when the current CBS series pays homage to the original — as seen in this exclusive photo from the Season 9 opener.

To mark the franchise’s 50th anniversary, Five-0 is retelling the story from the 1968 pilot, which ran in two parts and was titled “Cocoon.” As such, showrunner Peter M. Lenkov got to share a writing credit with the late Leonard Freeman, creator of the original series. 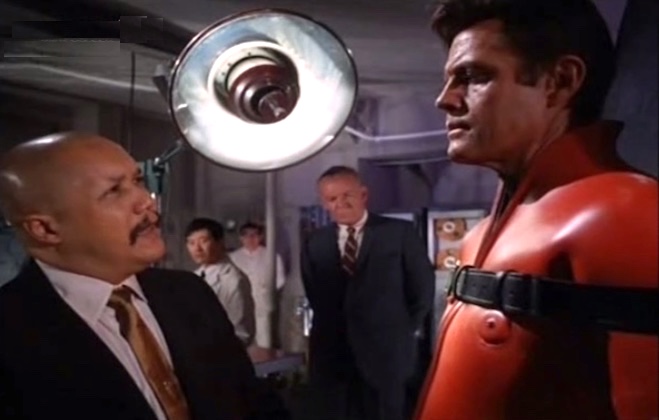 In both versions of the “Cocoon” story, Steve McGarrett (then Jack Lord, now Alex O’Loughlin) braved a torturous sensory deprivation tank in the course of tracking a killer. Wo Fat (originally played by Khigh Dhiegh) filled a pivotal role in the original pilot, so fans of the modern remake questioned how faithful the retelling could be. But have no fear, our Five-0‘s Wo Fat will be accounted for, even though he is quite dead in the current continuity.

As Lenkov shared with TVLine as part of our Fall Preview Q&A, Mark Dacascos will reprise his role as the vexing villain when McGarrett, freshly dazed from the sensory deprivation tank, imagines seeing his old nemesis, only to realize his actual tormentor is a man named Kang (played by Roger Yuan, top photo).

Elsewhere in the Season 9 premiere (airing Friday, Sept. 28 at 9/8c), Tani wrestles with whether or not she will tell McGarrett about the murder weapon she found at Adam’s house.