The 62nd installment of the Primetime Emmy Awards was a memorable one.

Held exactly eight years ago (on an extra-early date, due to pro football this-and-that), the NBC telecastsaw the freshman sitcom Modern Family walk away with no less than a half-dozen awards (after racking up 14 total nominations). Mad Men would be named Best Drama for a third straight year and Temple Grandin commenced what turned out to be a seemingly endless onslaught at every applicable awards show, as the TV-movie tied an Emmy record with five major wins.

It was back when the Emmys were fun — anticipated, not dreaded. The Twitterverse was still taking shape at the time, so widespread snark and predisposition to derision was not yet pop culture’s default setting.

It was also when the Emmys’ best opening number ever was delivered unto us, one that to this day remains a rousing crowd-pleaser (albeit tinged with bittersweetness).

Still years away from The Tonight Show being even a glimmer in his eye, Late Night front man Jimmy Fallon kicked off the proceedings with a pre-taped bit in which he arrived for the Big Show, tux in hand, only to find despondent Glee stars Lea Michele, Cory Monteith, Chris Colfer and Amber Riley. It seems that Emmy tickets commanded $300 a piece, and, I dunno, the kids’ back-end deals had yet to kick in. But as fortune would have it, a singing contest was at hand, with a perfectly sized prize. 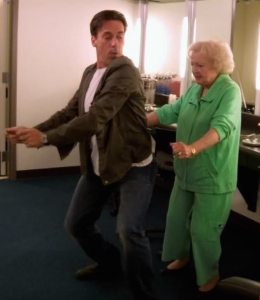 What followed was, fittingly, pure glee. Fallon & Co. set out to bolster their makeshift chorus’ ranks by way of (blatantly dubbed) 30 Rocker Tina Fey, Glee grouch Jane Lynch and a Jon Hamm who was found twerking (for Betty White!) before twerking was even a thing. Jorge Garcia, coming out of Lost‘s Emmy-nominated farewell run, and Joel McHale joined the mix, as did Vampire Diaries‘ Nina Dobrev, literally leaping into action. (The CW representin’!)

The gang was not so desperate, however, as to enlist the time’s omnipresent Kate Gosselin (gosh, remember her?). Which was yet another plus.

The quickly formed glee club’s riff on Bruce Springsteen’s “Born to Run” was punctuated by lively staging, fun asides (“Are there pants for this?”) and, in the end, a seamless segue into a live performance on the Emmys stage. And while seeing Monteith obviously evokes feelings about his tragic, too-soon passing, it also reminds us of how he effortlessly shined during his time in the limelight.

The following year, Lynch flipped the script a bit by singing her way through the sets of shows such as The Big Bang Theory, Mad Men, Parks and Recreation and Friday Night Lights (look, it’s Baby Killmonger!), but it didn’t have the same infectious, innate charm. In 2012, a “nervous” Jimmy Kimmel hid out in the Nokia Theatre’s ladies’ room, where he was calmed down/bitch-slapped by an all-star team of actresses. And in 2015, Andy Samberg crooned to a slew of stars about the perils of #PeakTV.

The 60th Primetime Emmy Awards, hosted by SNL‘s Michel Che and Colin Jost, will be broadcast Monday, Sept. 17 on NBC.