Just when we thought we knew what Younger had in store for all of our favorites, along came Tuesday’s season finale to remind us that nothing is ever predictable on this show (and not just when scaffolding is involved).

A quick recap: As punishment for Liza turning down a cushy gig at Chick(y), Cheryl leaked her affair with Charles to the press, forcing him to step down as the public face of Empirical. Moving forward, Millennial will serve as the company’s flagship imprint, with Kelsey leading the charge. (Zane, however, won’t have a front-row seat to the action, as he already scored a rebound gig elsewhere.) Meanwhile, Diana realized just how much she loves Enzo after she nearly lost him to the sewers, and Josh thought he was ready to have a baby… until Claire showed up at his doorstep with a surprise: She’s pregnant!

So, what’s next for Liza and Charles? Is Josh really the father of Claire’s baby? And what was Charles thinking approving Kelsey as the new face of the publishing house? For all those answers (and more!), TVLine turned to series creator Darren Star. Scroll down for our full Q&A:

TVLINE | Let’s start with that last shot of Charles and Liza, looking a little… regretful. Can you take us into their brains at that moment?
This relationship has always been a bit of a fantasy. They didn’t really know each other until this season, which has been about getting past the illusion and into reality. He got to know her and they got real with each other and circumstances have put them both in a place they didn’t expect to be. At the same time, they’re thinking, “OK, it’s going to be a challenge,” but it doesn’t mean that they don’t want to be together. It doesn’t mean unhappily ever after, just realistically ever after. 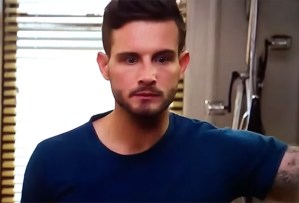 TVLINE | Speaking of being realistic, Claire is a shady character. Can we even be sure that her baby belongs to Josh?
That’s certainly something that’s going to be in question in Season 6. And what does it mean [if he is the father]?

TVLINE | Josh thinks he wants a baby, but based on his little trip, I feel like he just wants a future with Liza. Which is it? Both, maybe?
I think it’s a fantasy, but I also think that Josh has been thinking about this from the moment Liza had a pregnancy scare. I think Josh continues to mature and their perceived age difference becomes less important as time goes on.

TVLINE | Moving on to another couple, Diana and Enzo — I half-expected her to propose to him under a shower of sewage. Was that ever in consideration?
Not a proposal, but I think it was a big deal that she got there to begin with. She has found this unexpected relationship, and it’s not going to be without challenges. But she’s committed.

TVLINE | Her willingness to ruin that coat was almost as good as a proposal.
For her, it was the ultimate romantic gesture.

TVLINE | There were some big changes at Empirical, too. Is Kelsey really ready to run a publishing house?
[Laughs] Probably not. It’s going to be an interesting ride for her. I’ve seen this story in my own life where someone’s given that level of responsibility. Her ambition is ahead of her maturity.

TVLINE | And she won’t have Zane around to help. He’s not gone for good, right?
Right. Just because Zane is out of the office, that doesn’t mean he’s out of the series.

TVLINE | Just an aside: If I worked at Empirical, I think I’d hate Kelsey and Liza. It’s always about them.
[Laughs] Right? Who are these people and why don’t they have any say in any of these matters?

TVLINE | Lastly, I love Laura Benanti on this show. I think she’s a natural fit. Given Quinn’s stake in the company, should we expect to see more of her?
We’re very, very lucky to have her. I definitely hope to have her back, absolutely.

Your thoughts on Tuesday’s finale? Hopes for Season 6? Grade the episode below, then drop a comment with your full review.