Warning: The following contains massive spoilers for the Season 3 finale of Preacher. So if you haven’t watched yet and want to be surprised, imagine being told in Genesis voice not to read any further.

Sunday’s Preacher included a vampire feeding frenzy, strip-mall Nazis, a celestial captive, a soul-sucking Tony winner and a fight scene so brutal, it should have come with a warning that it might leave viewers vicariously concussed. In other words, it was exactly the Season 3 finale that fans of the wackadoo comic-book dramedy would have hoped for, if not outright demanded. Who managed to make it to the end of “The Light Above” alive — or, in the vamps’ case, undead? Read on… 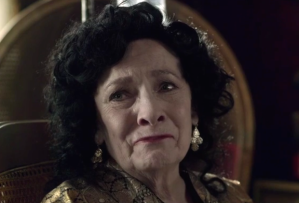 ‘YOU STILL THINK LIKE A CUSTER’ | At the tail end of a prologue in which young Jesse tried but failed to work up the gumption to murder his Gran’ma, the older, ballsier version of our anti-hero arrived back in Angelville determined to do what he should’ve decades earlier. First, though, he’d have to make it through T.C., who was sure “there [had] to be a constructive, nonviolent solution” to Jesse’s beef with Miss Marie. Yeah, no. After using Genesis to have T.C. shoot himself in the foot, Jesse suggested that he and Jody retire to the Tombs. There, they engaged in the kind of knock-down, drag-out brawl that could send even a spectator to the chiropractor. Finally, Jody made the mistake of reminding Jesse of the night he’d killed his father. Filled to overflowing with rage, the preacher bashed his opponent’s head into the stone wall so many times, with such force, that it resembled a watermelon after a date with Gallagher. “I’m proud of you, boy,” said Jody, well past the point at which he should have been dead (and, to be clear, right before he died). Jesse gave T.C. the option of leaving before he torched the Tombs, but the perv declined. Without Angelville, he said, “I got nowhere else to go.” So OK, up in flames he went. 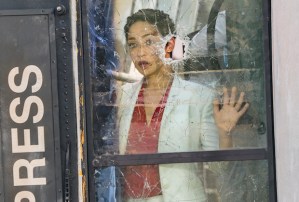 ‘FREE WILL HAS ITS CONSEQUENCES’ | Meanwhile, at the site of the bus crash, Rick and the other strip-mall Nazis told the Saint and Sidney, “Resist, and you will be liquidated.” Needless to say, the hellions resisted, and the hellions were not liquidated. While they decapitated the posers, back in the bus, Eugene thwarted Hitler’s escape attempt, and Tulip fought off a Nazi with a windshield wiper (because there is literally nothing that that badass can’t do). When the smoke cleared outside, Sidney asked the Saint, “All those crows… Do you think they pecked your daughter’s eyes out after she was dead or while she was lying there still alive?” I wouldn’t have thought it possible for the Cowboy’s gaze to get any darker, yet in that instant, darker it became. “Yeah,” said Sidney. “I think so, too.” Before he could tear her apart, the tank rolled forward and did exactly that to him. Nonetheless, by the time Sidney re-apprehended Tulip and Eugene, the Saint was able to launch a missile… which God, in turn, stopped in mid-air. “You see,” he told Tulip, “I am a loving God.” Only He wasn’t really. Though He offered to lift the O’Hare curse if Tulip would get Jesse off his back (lest Genesis interfere with his great design), He wouldn’t be sparing Eugene from a return to hell. When Tulip decided against the deal, God warned that Cassidy was in grave danger. “I was going to help to show you I’m a loving God,” He added, “but… ” More resolved than ever then to stick to her guns, Tulip called Him a d–k, He unfroze the missile and let the Cowboy, now miraculously back in one piece, remove Sidney’s eyes. 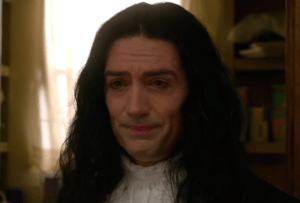 ‘GET A DUST BUSTER… AND MAYBE A SPONGE’ | Speaking of Cassidy and the grave danger he was in… Eccarius gave him one last chance to change his mind and save himself. Ultimately, Cass took him up on it. But he’d need some blood fast to heal his crucifixion wounds so that he could masturbate properly. And he didn’t want any old squirrel blood, either — he wanted human blood! Mrs. Rosen, of all people, volunteered to be turned. She didn’t even object when Eccarius proposed a crimson menage a trois. However, things were not as they seemed. When Eccarius bent down to Mrs. Rosen’s neck, he saw that there were already fang marks in it. What the what? With supernatural speed, the wannabe blood-suckers — who were now actual blood-suckers! — nailed Eccarius down (so that not even his shapeshifting could save him). Only then did Cassidy reveal that he’d turned Mrs. Rosen, and she’d turned everyone else. So “now what?” Eccarius asked Cass. “Go back to your loveless, lonely existence?” Sure, he replied. But first, dinner! With that, the vamps devoured the scumbag who’d deceived and destroyed so many of their pals. Later, as they were cleaning up, Hoover returned with big news for Cass: He’d quit the Grail. Oh, and he had a present for the vamp who’d saved him: an umbrella, which he advised be opened immediately. Er, why? Because at that moment, a Grail chopper pulled off the house from above the basement, exposing to the sun everyone but Hoover and Cassidy!

‘WELCOME HOME’ | When Tulip arrived at the scene of the vampire barbecue, she learned from Mrs. Rosen and her son (who’d apparently leapt into coffins when the s— hit) that Cass had been taken by the people in white. Them again! Back in Angelville, Jesse delivered to his Gran’ma the suitcase full of souls, enough to keep her going for another 100 years. He also used Genesis to make her release Tulip (cue the puke) and say aloud that his debt was paid. Technically, he’d gotten everything he wanted. Only now he knew that he couldn’t just leave Angelville. He had to kill Gran’ma and burn down the place. Miss Marie wasn’t scared, mind you. She simply revealed that she’d made a deal with her “gentleman caller” — Satan — that arranged for Jesse, not her, to go to hell, should he kill her. OK, so Jesse couldn’t throttle her like he wanted to. He could at least use Genesis to force her to destroy all the souls that she craved so badly. Thing was, it still didn’t feel to him like he’d won. So, after making it as far as the gates of Angelville, he turned around, went back and strapped his Gran’ma into her soul-sucking machine. Sure, when he died, he might go to hell. But “today,” he spat, “you burn.” (Hate to see Betty Buckley go, but man, was she ever a blast!) 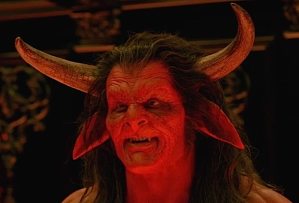 ‘HOW DARE YOU PULL A GUN ON THE PRINCE OF DARKNESS?’ | In hell, Satan kept his end of his bargain with the Cowboy, returning his weapons so that he could resume pursuing the preacher… whose name was what? the devil asked. Hearing that it was Jesse Custer, Satan couldn’t contain his glee since he’d just struck a deal with Marie that would bring Genesis to hell if that particular preacher was killed. The Saint had a question, too: Whose idea had the crows been? Though Satan insisted that “it was God’s, of course,” the Saint shot him, releasing bats from the hole in his head. When the Cowboy left, having realized that Eugene didn’t belong in hell, he took the teen with him. But Hitler? Heil, no! He was right where he belonged — a fact born out when the fuhrer seemed to get awfully comfy awfully fast behind Satan’s desk! As the finale neared its conclusion, Jesse and Tulip took off to save Cassidy, who was at that moment imprisoned in a pit in Masada, an angelic fellow prisoner bound several feet above him. When Herr Starr learned that Hoover hadn’t been joking about being a vampire, he knocked off his henchman’s protective hat, burning him to a crisp. Finally, Starr revealed to Featherstone that he no longer wanted Jesse to be his messiah, he merely wanted revenge. Featherstone was thrilled, since that meant the chess match for world domination would continue. No, Starr replied. And as we got a hint of the massiveness of the war he seemed intent on starting, he said simply, “It’s time to play some f—ing checkers.”

So, what did you think of the Season 3 finale? The phrase “bats— crazy” comes to mind, no? Grade the episode below, then hit the comments with your hopes for Season 4.