After missing out on last season’s big excursion to Ireland, Younger‘s Diana Trout is determined to make the most of tonight’s trip to Germany (TV Land, 10/9c). And you don’t get much bigger than a major musical moment with Martha Plimpton.

“I love that the writers, even since Season 1, have insinuated and dropped all these hints about how Diana was a massive party girl back in the day,” Miriam Shor tells TVLine. “First it was with Jane Krakowski’s character, and now we’re doing it again with Martha Plimpton. It cracks me up because it’s just so unexpected.”

Below, Shor discusses her character’s experience in the land of bratwurst and lederhosen, as well as what the future may hold for Diana and her honk — sorry, hunk — of a boyfriend:

TVLINE | How did this performance of “Cabaret” come about? Did they ask you if you wanted to sing something?
[Laughs] Oh, they didn’t ask. But I do remember that Don Roos, who wrote the episode, told me about it ahead of time because he was so excited. And it’s funny, Martha and I have sung together in the past — years ago. I love her, and she’s ridiculously talented, so it was exciting to get to do that with her. 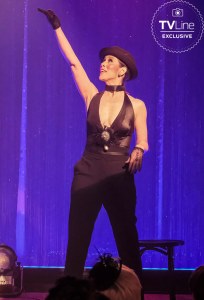 TVLINE | I imagine filming this type of scene must have been very different from what you normally do as Diana.
It was completely different. For starters, they were like, “We’re going to get the choreographer,” and both Martha and I were like, “FYI, we’re not dancers.” So the choreographer would say, “OK, now we’re going to do this…” and Martha and I would look at each other and just say, “We’re a little tired for that.” The choreographer was great about it, and I think it worked out nicely. Yes, it should be a surprise that these characters can sing and dance, but they shouldn’t suddenly be able to do split leaps. Either way, it’s fun to dig into Diana’s past and be surprised by it.

TVLINE | Between this and Liza performing that song from The Sound of Music, I’m starting to think everyone at Empirical has a background in musicals.
And it’s not completely unprecedented. Diana did take Kelsey to Marie’s Crisis, so it’s obviously a place she goes to often and loves to perform at. That was already there. Plus, she was married to a gay man, so there’s got to be some love for musical theater there.

TVLINE | I imagine this could change the way Diana’s co-workers see her.
There’s actually a scene that was cut where Diana talks about feeling discarded and ignored by the publishing industry because Millennial is taking all the attention from Empirical. Like, “Am I just supposed to be move aside because I’m not 20-whatever anymore?” And that’s a real thing in a lot of work places, especially for women. If you’re not young and new, you’re not interesting anymore. So that whole performance comes from her trying to prove that she still has it. She’s reconnecting with what made her feel fearless when she was younger.

TVLINE | Speaking of feeling things, I’m loving Diana with Enzo. Is he the one?
I also like what the writers have done with that relationship. Richard, on paper, was the man she would, of course, see herself with — yet he turned out to be completely selfish and forced her to compromise who she is. Meanwhile, Enzo is someone who she’d never see herself with on paper, but it turns out that he’s challenging her in ways that are making her open up. She’s finally realizing that she shouldn’t be so judgmental, and I think she deserves some happiness. And Chris Tardio is wonderful.

TVLINE | Diana taking the Staten Island ferry was also wonderful.
Oh my God. I said to Darren [Star], “Obsessed with Working Girl much?” And he was like, “Oh, I love it.” And I love that movie, too. But I was like, “Are people going to get this?” And it turned out that people did! She’s literally being taken out of her comfort zone (i.e. Manhattan) and isn’t going to subject herself to any of his family’s bulls–t. And you’ve got to love a man who can say, “You know what, you’re right.” That’s the basis of a great relationship in my opinion.

TVLINE | Dumb question: Do you really speak Italian?
I do! I approached Darren last year — and maybe also the head of TV Land — and was like, “I think we should go to Italy.” I was pitching it in those terms, and I was pushing it hard. Meanwhile, Peter Hermann speaks fluent German, so he was pushing for a trip to Germany. I actually went back and forth between the U.S. and Italy for my whole childhood until I graduated from high school.

TVLINE | I love that you went all the way to the top with that request.
[Laughs] Oh, I’m not shy. Or I have no shame. Or a combination of both.

Your thoughts on Diana’s wild past, as well as her potential future with Enzo? Drop ’em in a comment below.