Let’s start with the good news: Amazon’s awkwardly titled Tom Clancy’s Jack Ryan (debuting Friday, Aug. 31 on the streamer) is at its best when things are exploding, delivering a number of impressively high-octane action sequences on a scale rarely seen on television. The rest of the series, though, is disappointingly mediocre… and its choice of leading man may be a major stumbling block. 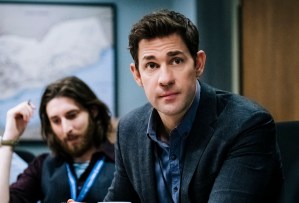 John Krasinski — a lot more chiseled now than when we knew him as Jim Halpert on The Office — stars as the iconic Tom Clancy hero, a former Marine now working behind a desk as an analyst for the CIA. While tracking suspicious bank transactions, Jack thinks he stumbled upon “a brand-new bin Laden” known as Sheikh Suleiman and gets called up to the big leagues when his new boss Jim Greer (The Wire‘s Wendell Pierce) backs his hunch. Jack insists he’s not cut out for this — “I don’t interrogate people! I write reports!” — but he’s soon pulled into an intense whirlwind of death-defying action overseas.

For fans of The Office, though, it’s virtually impossible to see Krasinski biking to work or making small talk over a cubicle wall and not think of this show as Jim Halpert: Action Hero. Krasinski’s newly honed physique certainly looks the part, but the nice-guy persona he built over nine seasons at Dunder-Mifflin is hard to forget about, making him ultimately unconvincing as Jack Ryan. Harrison Ford made the character his own in big-screen thrillers Patriot Games and Clear and Present Danger — an everyman with high ideals and the capacity to kick ass when needed. Living up to Harrison Ford is a high bar indeed, but Krasinski doesn’t quite clear it here, and the series suffers as a result. 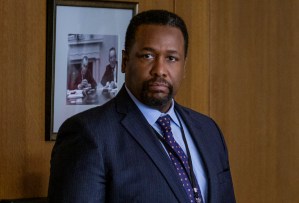 His Jack Ryan is a bit too perfect, actually. (He’s “too good for his own good,” as one character puts it.) He’s a doctor of economics, and a muscle-bound war veteran, and he knows every answer on Jeopardy!… he’s been scrubbed of any kind of flaw that might actually make him interesting as a character. He’s weirdly isolated, too, with no friends or family and an idle flirtation with a cute doctor (Abbie Cornish) as his only human contact outside of work, so he too often comes off as a blank slate. Krasinski does have a nice combative rapport with Pierce, who’s enjoyably prickly as Greer, a former CIA big shot who’s now banished to a “backwater post” and takes his frustrations out on Jack. (Pierce is so good, I’d almost rather watch Tom Clancy’s Jim Greer.)

Creators Carlton Cuse (Lost, Bates Motel) and Graham Roland (Fringe) also make a valiant effort to flesh out Suleiman and his militant band of terrorists, not reducing them to one-dimensional villains but showing us their home lives and the motivations behind their bloody attacks. But I wish they’d spent some of that time making Krasinski’s Jack Ryan less of an enigma instead. (After three episodes, I felt like I knew Suleiman’s wife better than I knew Jack.) Plus, most of the non-action scenes tend to drag, getting bogged down with clumsy exposition, dead-end subplots and bureaucratic minutiae. The end result is something like a watered-down Homeland, without the kind of character depth and psychological complexity that has kept us hooked on that show for seven seasons now.

Jack Ryan‘s action scenes, though, truly are top-notch. The premiere episode builds to a heart-pounding assault on a military base, and Episode 2 follows that up with an excruciatingly tense firefight in close quarters. Amazon clearly threw a lot of cash at these scenes, and they’re so exhilarating, they almost make the rest of the show worth sitting through. But we need more than just eye-popping explosions, don’t we? Until Jack Ryan finds a way to make its drama as compelling as its action scenes, it’ll go down as a mission not quite accomplished.