If you’ve ever used a DVR, surely there are recordings that managed to survive many a purge, even if they’d been watched (or re-re-re-rewatched). But today, when episodes of countless series are handy via Netflix, Hulu or whatever, why do we still let old chestnuts claim hard drive space?

It’s time to come clean, every one of us. The tail end of my current DVR playlist is in full view above, and each recording has a story.

For example, I have yet to watch BvS from start to finish (and only saw any of it within the past month or so). The original Star Wars is never not fun to sample on a quiet night. PBS’ Hamilton’s America remains unwatched, as I have yet to get to the stage show. (Yes, I suck.) Castle and Mad Men, like Once Upon a Time on the unseen page prior, are series finales, so there’s more than a bit of sentimentality at play.

History’s 10 Things You Don’t Know About The White House has been squatting there for more than three years, ostensibly to entertain/educate my sons (before they became binge-aholic teens, so that ship has probably sailed), while the 2014 American Music Awards is there simply because I find the “Blank Space” cold open to be quite mesmerizing; those first minutes have been watched often. 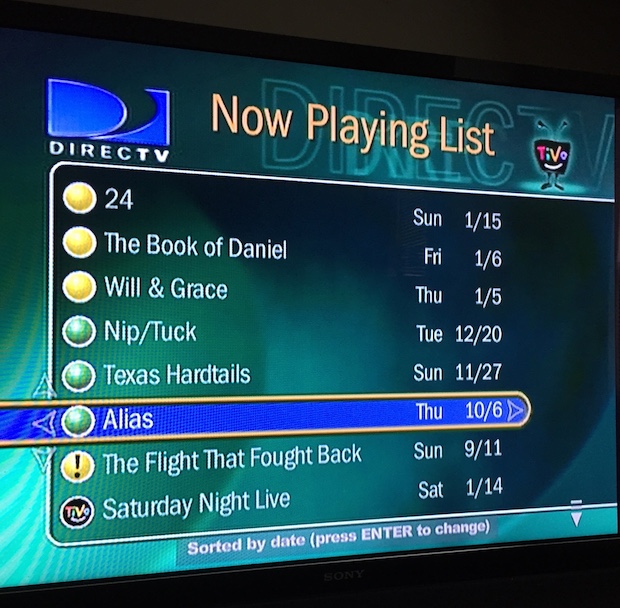 My next confession, and I know there are others of you out there:while

I kinda sorta collect DVRs, or at least the ones I didn’t need to return (e.g. my very first TiVo, playlist shown. Firing it back up, I forgot how much I missed those original, pleasant bleeps and rebuking ka-boink!s). On one of these, I have a General Hospital special that included Sarah Brown’s debut as Carly (though I seem to have “lost” that particular DVR during the divorce. No correlation, probably). I’ve also got tucked away somewhere my appearance as a guest judge (alongside Ausiello) on Food Network Star. Yes, we helped give the world Guy Fieri.

The Now Playing List shown here is from more than a dozen years ago, featuring 24: Day 5; a short-lived NBC drama; a Nip/Tuck I surely only caught up on because I had an interview booked; some OG Will & Grace; and something called Texas Hardtails (such a long story, that one).

Returning to the point made in the intro above, the curious thing now about what I will coin (and probably alone refer to) as “DVR Dust Bunnies” is that these episodes/movies/specials more likely than not exist elsewhere, on a streaming service. And yet we choose to save a precious slot for them because — at least the way I view it — it is so much handier to have it “there” on the TV, versus hitting A/V Input… finding the remote for and powering up the Apple TV… wedding through dozens of app icons… and then trying to recall if such-and-such show is still on Hulu (or did it move to Netflix?). Plus, some older titles simply vanish from the streaming-verse, I know that I’ll always have Don Draper dreaming up a Coca-Cola jingle just two remote clicks away.

What do you find yourself stowing away on your DVR, despite hard drive-cleaning purge after purge?