Claws wrapped up Season 2 with maybe the bloodiest TV nuptials since Robb Stark’s… but did all of our nail crew favorites emerge with their manicures (and lives) intact?

As Hurricane Ignacia rolls in, we see flashes of Desna and Ruval in a vicious fistfight while Virginia narrates that Desna’s wedding day actually turns out to be “a different kind of fairy tale.” (Why is Virginia narrating? Yeah, we’ll get to that.) Rewind to two days earlier: Desna thanks her nail crew for backing her up on the fake wedding scheme before meeting Ruval and his lawyers to sign some pre-nup documents — and seeing exactly how much money her groom actually has. She then meets with Zlata, who tells her there’s been a change in plans: Instead of Zlata killing Ruval, Desna will do the dirty work by slipping poison into his drink on their wedding night. Desna protests — she doesn’t want to kill anyone — but Zlata, as you might know by now, is a hard person to argue with. 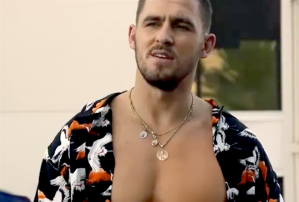 Meanwhile, Roller — who still hasn’t learned how to button a shirt, God bless him — is having suspicions about Clay after fellow henchman Clint hints that Clay was actually responsible for the death of Roller’s dad. Is Clint just stirring up trouble… or has Clay been lying for years? Roller goads Clay into telling the story of his dad’s death again, and Clay remembers listening to a sermon before seeing Roller’s parents lying on the ground, “full of holes.” But as Roller later tells Bryce, that doesn’t match his original story about that day. So just as the Husser boys are gearing up to take down Zlata, there’s a serious crack in the family foundation.

The night before the wedding, Desna’s gals get tipsy and horse around — Jen previews her speech, which makes sure to mention that Desna has “the biggest t-ts I’ve ever seen in my life” — but Desna is distracted, eventually breaking down in tears to Ann. Even worse, the hotel manager tells her they’ll have to postpone the wedding because of the hurricane. Desna won’t accept that, though, and her girls (including a fresh-from-the-psych-ward Polly) help her slap together a makeshift reception with handcrafted decorations and a menu of Cheetos and donuts. Plus, Ann’s ex Arlene sets Desna up with a wire to gather evidence against Zlata. Should make for one heck of a wedding, huh? 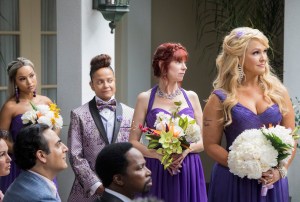 The big day arrives, and Desna looks “dewy and buttery” in her wedding gown, according to Virginia’s narration. (And our eyes agree.) As Ruval’s mom glares from the front row, Desna vows to Ruval that “I will honor and cherish you until the day you die.” (Hmmm.) Everyone enjoys the reception, despite the convenience-store eats, but Roller isn’t happy. He follows Desna into the ladies’ room and sobs to her that he thinks Clay killed his dad. “You’re like the only real thing in my life,” he tells her, before kissing her… and sneaking underneath her dress to give her, um, a wedding gift. Desna (loudly) accepts — as Roller’s baby mama Olga listens right outside the door. Uh-oh.

Clay and Clint pull Roller aside, ready to take out Zlata, but Roller suddenly chafes at Clay’s leadership, eventually exchanging punches as Roller tells his surrogate dad: “I know what you did.” Clay doesn’t exactly defend himself, and after Roller walks away, even puts his pistol into his own mouth (!). But the ghost of his late wife Juanda materializes to talk him out of it, confirming that they did have a role in killing Roller’s dad (“we had our reasons”) and giving her hubby a pep talk, inspiring him to “end that Russian bitch” once and for all. 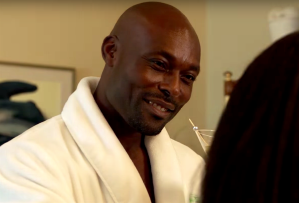 In the bridal suite, Desna shakes up a couple of martinis for her and her new husband, being sure to squirt some poison into his glass first. He’d rather consummate their marriage than drink, though. She stalls him by saying she wants to get out of her gown and freshen up, but then Ruval gets a call from Olga, telling him about Desna’s fling with Roller… and her plot to kill him. Ruval savagely turns on Desna — here’s that fistfight we saw at the start — and they tumble into a glass table, with Desna picking up a glass shard and threatening Ruval with it. “You wanna stab me? Go ahead,” he taunts her — and she does! (Go, Desna!) He tells her he loves her, but he’s still going to kill her, and she lunges at him, stabbing him again before shoving him over the balcony railing to what looks like his death. (Is he really dead, though?)

While Roller and Polly scramble to help Desna, she heads to Zlata’s room, now that the deed is done. First, though, there’s the matter of Ruval’s mother. She zips up in her scooter, pulling out a gun and demanding to know where her son is… before standing up (!!). Zlata, though, nonchalantly grabs her gun and shoots her in the gut with it before giving Desna some final documents to sign. After Desna does… Zlata points a gun at her: “You’re the only messy part left.” Desna can’t believe Miss Girl Power would betray her, but Zlata just laughs her off, and we hear a gunshot… before Zlata crumples to the ground. It’s Dean! He shot her! A dying Zlata tries to give Desna one last “sister friend,” but Desna just shoves her aside, snatching the “BOSS” necklace right off her neck for good measure.

The cops arrive to clean up all the dead bodies — seriously, at least three people didn’t survive this wedding? — and Desna hands the wire back to Arlene, saying that Zlata’s full confession is on there. Desna shouldn’t face any charges, but “the salon is ours now,” Arlene says. (Because it’s part of the drug ring?) Desna does take control with Clay, though, sauntering into the strip club with that “BOSS” necklace on and informing him she’ll be handling the clinics on her own from now on, with Roller backing her up. “Thank you for underestimating me,” she tells Clay. “That s–t taught me a lot. Now get out of my face.” That “BOSS” necklace has powers, clearly. 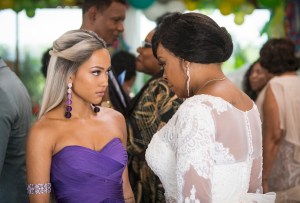 She even gets an unexpected bonus when a freshly rehabbed Mandy takes a look at Ruval’s assets and tells Desna she’s now the proud owner of a Harrah’s casino. She’s a high roller now! She and Virginia celebrate… until a pair of masked men roll up on a motorcycle and draw a firearm. Virginia shoves Desna out of the way — and takes a bullet for her. The bike zips away, and Desna screams for help as Season 2 draws to a close. So is Virginia narrating from beyond the grave? It looks like she just got grazed, though; she’ll survive, right? Are Ruval and Zlata really and truly dead? Are Desna and Roller really and truly back together? And who else is suddenly starving for Cheetos and donuts?

Alright, it’s your turn: Grade tonight’s Claws finale in the poll below, and then hit the comments to share your post-finale thoughts.