Good Trouble is hosting a brother-sister reunion: Hayden Byerly will reprise his Fosters role as Jude Adams Foster in an episode of the forthcoming Freeform spinoff, TVLine has learned.

When viewers last saw Callie’s little bro during the Fosters series finale event in June, he had confessed to his moms that he was on academic probation after his first year at UCLA. But when the student resurfaces on Good Trouble, “he’s doing a lot better at school,” executive producer Joanna Johnson tells TVLine. “We really enjoyed seeing Hayden play older [in the finale]. I thought he just killed it. I thought he was really great. So we’re excited to see 19-year-old Jude. He is in a better place than we left him.”

The offshoot — premiering in 2019 — follows Callie (Maia Mitchell) and Mariana (Cierra Ramirez) as they begin the next phase of their lives as twentysomethings in Los Angeles. The cast also features Tommy Martinez (Riverdale) as a socially conscious graphic designer who lives in the girls’ apartment complex; Zuri Adele (Under the Dome) as a former foster kid; and Sherry Cola (I Love Dick) as the apartment complex manager. Additionally, Roger Bart (Revenge, Desperate Housewives) will play Judge Wilson, the conservative judge for whom Callie is clerking.

Fosters mamas Lena (Sherri Saum) and Stef (Teri Polo) are also slated to appear on the show, with more original series stars to visit, if Johnson has her way. “We want to see Brandon and Eliza, and we definitely want to see Jesus,” the EP previously told TVLine. “We want to see them all this season, for sure, as long as they’re willing to come.”

Scroll down for a photo of Byerly on set with castmates Martinez, Mitchell and Ramirez, then hit the comments with your excitement for Jude’s return. 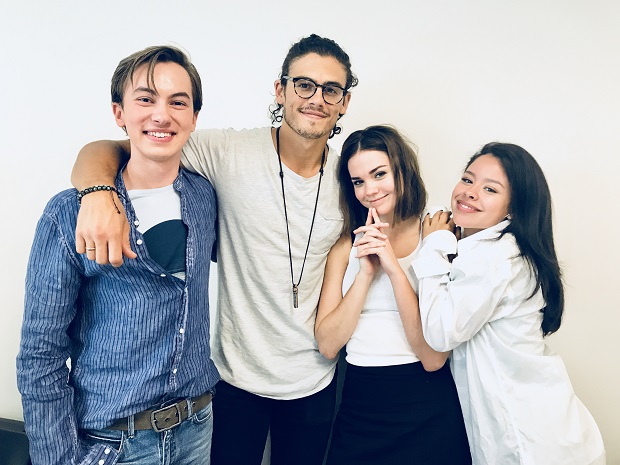