This week on Reverie, Season 1 closed by delivering closure for two characters — while leaving the door wide open for a potential Season 2 curveball.

To kick things off, Mara met up with her comatose brother-in-law, Ray, in a reverie, so as to find out what exactly was going on with him the day that he “snapped” and shot dead both his wife and their daughter. (Short answer: job layoff, stacks of bills, seeing suitcases in the hallway.) Mara then filled in a blank for her BIL, by revealing that she nudged him to attempt to take his own life, to be with Jamie and Brynn forever. Ray, though, said he didn’t require Mara’s permission, because he would have done it anyway.

Meanwhile, Alexis celebrated her 25th birthday with her parents, only to cast a cloud on the proceedings by pointing out how they seemingly dismiss Dylan’s existence — by never mentioning him, having barely any photos of him in the house, and certainly not acknowledging his A.I. incarnation. (In flashbacks, we learn that Dylan was trying to play with his busy sister when he tumbled through the greenhouse roof and died.) Afterward, Alexis is abducted in the driveway by Oliver Hill, who proceeds to induce a reverie where they are together in Albert Einstein’s basement lab aka a site of their first date. Thing is, Oliver has keyed “exitus” to only his voice as well as located the mandala somewhere beyond the room’s lone, locked door. So Alexis is quite trapped, while Oliver leaves to set the rest of his plan in motion.

That plan, we and the Reverie team later come to realize, is to burn down the Onira-Tech servers, thus putting thousands of users in peril — all in the name of saving “millions,” he argues, from the Reverie program!

Mara enters Alexis’ reverie, where she is spooked by several avatars covered in embers and ash. Once Mara finds the locked door out of many, Alexis cues her to use an ersatz key and “remember” how it feels to open a lock with it. Mara succeeds and frees Alexis, who pushes past evil iterations of her parents to find the mandala and wake up in a remote cabin from Oliver’s past that Charlie and Monica had tracked down.

Knowing that Oliver is inside the server area, readying to engulf it in flames, Charlie and Mara bravely enter. Mara uses her negotiator skills to dig into Oliver’s difficult past, a time when he torched a school full of peers and teachers who didn’t believe and dismissed him. Alas, her words are not enough to keep him from flicking his Bic.  Charlie to get a shot off, but when Oliver slumps to the ground, he is able to spark the blaze. Firefighters, however, arrive on the scene to tame the flames and drag out a moderately-charred Oliver.

Mara’s work is not yet done, though. No, she enlists Paul to unite her again with Ray, to whom she gives a photo of Jamie and Brynn, so that he can remember them. And as his avatar gazes upon it, in real-life he flatlines at the hospital. 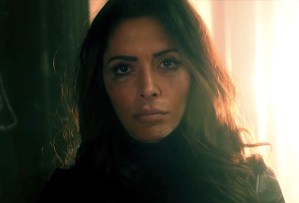 In the wake of that nicety, Paul and Mara share a potentially warm moment… until Charlie arrives to pull them away to the re-opening of Reverie, presided over by Alexis and a grown-up version of Dylan’s A.I. (after his twin decided it was time to stop living in the past). But as Reverie boots back up, Paul alerts Mara to an oddity: his data shows that she is still inside the program, even as she stands there before him, very much not in a reverie. We then cut to the dark reverie that Alexis was saved from earlier, where a somewhat ghoulish, glitching version of Mara is seen scratching at the dank hallway’s doors with chalk….

What did you think of Reverie‘s freshman run? Do you demand an encore?