The Bold Type‘s Sutton is saying “Bonjour!” to Paris in this Tuesday’s season finale… but can her broken heart handle being in the City of Love?

While the trip is everything the rising stylist has been striving for, professionally, it also makes Sutton “realize what [she] gave up to get” there, star Meghann Fahy previews below.

Read on as the actress talks about Sutton’s feelings for her ex Richard and the finale’s exciting ending.

TVLINE | What kind of adventures are in store for Sutton when she gets to Paris?
Going to Paris for Sutton is the one thing that she’s dreamed about for her entire life, so it’s pretty surreal for her that she’s actually going. What I think is going to be really cool about the trip is that moment of what happens when you get the thing that you’re dreaming about, and you realize what you gave up to get it, and it becomes really clear whether or not it’s worth it.

TVLINE | She is also single in the most romantic city in the world. Does that play into her headspace?
I think so. She’s not really over the Richard thing, because it was never a question of whether or not they wanted to be together. They did and do, I think. So I do think that that will absolutely be a part of her process when she’s in Paris. 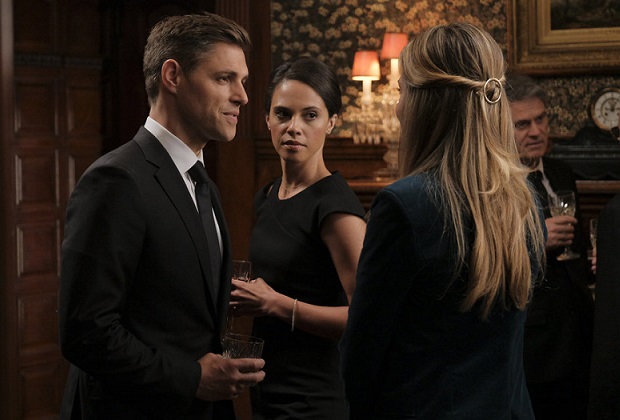 TVLINE | Where do her feelings for Richard stand going into this finale?
Like I said, I don’t think that it’s easy. She kind of broke her own heart when she chose her career over him. But I do think that at the end of the day, she thinks about him and wonders. But I also think that she’s seen him with Jessica, and she thinks that he’s happy, and she loves him enough to want him to be happy. So there is some part of her brain that is making peace with that and just coming to terms with the fact that he’s maybe moved on.

TVLINE | When I spoke to [showrunner] Amanda [Lasher] at the beginning of the season, she said it was much more career-focused for Sutton this season rather than about her dating other guys and trying to move on. Did you enjoy having that focus on her career rather than her love life?
Absolutely. I think it was really important for us to show that, because she really needed to learn with the choice that she made and sort of accept the consequences for that, and then decide if it was right for her.

TVLINE | What can you say about what kind of note the episode ends on?
Something that I love about our show is that we don’t really operate on a cliffhanger sort of vibe. So for the most part, we do tend to end on a note that feels really, really good to the audience. I think people will see the finale and feel excited about what’s next, and feel happy about the way that things are unfolding.

The Bold Type season ender airs Tuesday at 8/7c on Freeform. Are you hoping for a Sutton/Richard reunion? Hit the comments with your thoughts!