The Season 3 premiere of Animals., HBO’s idiosyncratic, animated comedy, brings with it lots of changes.

Gone are the entries with multiple storylines and animated humans, making way for new stories that span entire episodes and — BRACE YOURSELF — live actors (hello, Demi Moore)! Of course, the casual banter, out-of-place realism and surprise guest voices that we all know and love are still there. 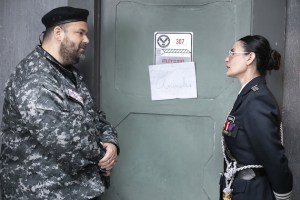 The first episode finds rats Mike and Phil on a quest to return home after a crazy, drunken night. Along the way, they meet friends, enemies and sentient toasters. So stop kitten around, get ready for some toadally sealy animal humor (please don’t hate us; we couldn’t resist) and read on for the highlights of “Rats.”

‘YOU AMERICAN IDIOT’ | Three years after the Green Bomb landed on New York City and killed all the humans in the city — a day known as Green Day — an unnamed lieutenant  (The Last Man on Earth‘s Mel Rodriguez) continues giving a tour of a government facility to an unnamed general (Empire‘s Demi Moore). The facility works to ensure that another Green Day — “no affiliation to the genre-spanning, multi-platinum, punk-rock-alternative rock trio Green Day” — never occurs again. They come across the center dedicated to monitoring the effects of the bomb on the animals in NYC, which is the key to finding a cure to the fallout. After an awkward encounter with the privates monitoring the animals, they continue their tour. But not before she drops a pen reading PESCI, the same company that created the Green Bomb… 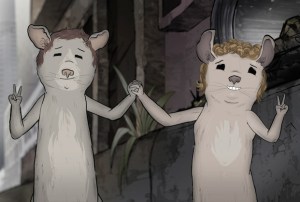 ‘BASICALLY THE N-WORD TO CATS’ | Walking back from celebrating Green Day — the human tragedy is now the animals’ celebrated holiday — Mike and Phil can’t find Mike’s 2010 Kia Soul that he most likely bought from a hamster. They run into fellow rats Tia and Lillie, who remind them that they left the car at Club Balaban’s after a regrettable encounter with a bacon-flavored condom put Phil in the hospital. Our heroes call  Ruber, a catapult service that launches customers to destinations in rubber balls, to fling them to Balaban’s. However, a fight with their launcher sends Mike and Phil to the Democratic Republic of Kitty City, a North Koreanesque area that closed itself off from the outside world. “I didn’t even know you could Ruber into here without a Visa,” Phil nervously points out. Mike and Phil barely escape, but not before an unfortunate communication error with the cats — DO NOT SAY MEOW!

THE ORB | The rats think they made it back to Rat Town, but something is not right. Everyone is dressed in red robes and wearing homemade jewelry. No, they aren’t in Gilead but GrabBagVille, a land run by, well, a grab bag of former pets. The two get caught up in a ceremony honoring “the orb,” residual material from the Green Bomb that has become a god to the grabbaggers, with Phil getting called onstage to “unburden himself.” “After the humans died out, we all scratched and scrounged to build up walls, but maybe there’s a better way to live,” he preaches. Of course, no one understands him because of the language barrier, reawakening dark memories of the rats’ past. “When the humans were around, you guys were the godd–n pets while us rats were treated like garbage,” Phil laments with a supporting “rats take care of rats” from Mike.

TEAM TEAMWORK | Principle Leif, the only other rat there, criticizes Phil and Mike for their “ethnocentric mindset” and prejudice towards other animals. To show them that they can live in harmony, the grabbaggers build them a car to take them back to Rat Town, teaching Phil and Mike the power of teamwork and friendship. HIP HIP HOORAY.

BOB BALABAN OF BALABAN’S BAR | Driving back to Rat Town, the rats hit a sentient toaster — guess the Green Bomb had other unforeseen side effects? — and conveniently crash by Balaban’s and find Mike’s car. However, the owner, a rat version of actor Bob Balaban (Seinfeld), won’t give them the keys since they didn’t pay for their drinks. The two leave the bar only to be confronted by a mob of rats angry about the way Mike and Phil treated their Ruber launcher. To quell the mob, Balaban gives the car to the Ruber rat, and Mike and Phil are put in wooden stocks and shamed for their actions.

Now it’s your turn. What did you think of the premiere? Grade it via the poll below, then hit the comments with your thoughts.