Cloak & Dagger‘s freshman season came to an explosive conclusion with Thursday’s finale, which pushed Tandy and Tyrone to their breaking points — then offered a wild peek into the show’s future.

A quick recap: After learning about the whole “Divine Pairing” situation, Tyrone volunteered to sacrifice himself to save the city, but Tandy wasn’t about to let him die just because some old legend claimed that only one of them could survive. And wouldn’t you know it, their team-up prevented the explosion without costing either of their lives.

Speaking of lives (not) being lost, O’Reilly appeared to be down and out when her unconscious body was dumped into the water, but in the episode’s final moments, she emerged a changed woman. One tinged with a bit of… Mayhem, even.

TVLine spoke with executive producer Joe Pokaski about the finale’s biggest moments, most surprising developments and, of course, that first look at O’Reilly’s alter ego: 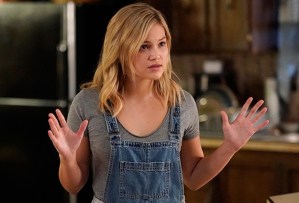 TVLINE | I feel like a lot of younger viewers won’t even know it is a cover.
I know, that’s going to be interesting. It’s so sad. I certainly am not. It’s funny, when we were working on this, Olivia was like, “You know, I think I opened for Styx at a NASCAR show.” Like, really? That’s crazy! So she actually knew them. It was so fun to put together. I would never work in music — I don’t have the talent to do it — but when you get to half-produce something like that, it’s fun.

TVLINE | Now that Tandy and Tyrone have finally gotten a taste of what they can do together, will that change how they operate next season?
Yeah, I think that’s exactly it. Season 1 was about understanding them as human beings, then thrusting them into a heroic role. Season 2, in our dreams so far, is about them choosing to be heroes, choosing to be vigilantes. We’ll look at the reality of it and how that bucks up against what you’re supposed to do — and what happens when you cross the line.

TVLINE | We’ve spoken about the pacing of the season. Will Season 2 follow the same gradual build, or will it be more hectic from the start?
Part of the reason we wanted to let it breathe was so you could really lock in on who these characters are. Having worked on a few genre shows, I know there’s an inevitability to it speeding up, which I think we saw begin around Episode 6. Part of the reason we deliberately lingered towards the beginning was because you can never go back. In truth, we’ll probably be at a similar pace in Season 2, or we might ratchet it up a little more. The training wheels are off a little in terms of storytelling, so we’ll be moving at a slightly quicker pace.

TVLINE | I guess it wouldn’t make sense for things to slow back down, especially since Tyrone is still wanted for murder.
Yeah, that’ll be a big obstacle. What we were excited to do — possibly because we’re masochists — was to take something away from Tandy and Tyrone at the end of the season. Tyrone’s main problem was that he was living in a gilded cage; in the first episode, he called his mom “smothering.” So when you do that on our show, it means that by the end of the season, you won’t have a mom anymore. We’re able to look at a different aspect of his personality and to knock him down and see how he gets back up. On the Tandy side, it’s the same sort of thing where she’s been in a little bubble — living alone and keeping people at arm’s length, which allows her to be cynical — but by the end, she’s seen what her mom’s gone through for her. She chooses to move back in, which is the right thing to do, but it’s going to be complicated. It’s going to recalibrate her morality, as well.

TVLINE | This is a potentially stupid question — and I’ve already told you I’m not a comic expert — but did Tandy and Tyrone break the curse of the Divine Pairing, or just prolong it?
They have broken the curse. We’re very excited about the idea of the next generation saving us all. We talked about it before Parkland and after Parkland. We love the idea that people have always said “This is the way it’s supposed to be,” and then our kids are the ones who say, “No. Just because you say this is the way it’s supposed to be, that doesn’t mean it has to be.” We take inspiration from Emma Gonzalez, the idea that we’re only going to be saved by young men and women who say “Enough is enough, we’re changing the rules.” 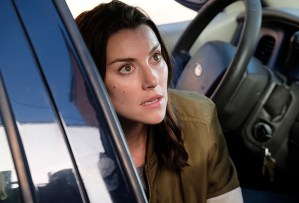 TVLINE | When Freeform announced that Season 2 will be “mayhem,” I figured we’d be getting a glimpse at O’Reilly’s alter ego. Was that the finished product, or will her look continue to evolve?
Everything we do with Mayhem, particularly in the first three or four episodes, is going to surprise the heck out of you. I don’t want to say too much, because I’m really excited about what we’re doing. It was a tease about how we’re turning up the volume in Season 2. Now that we’ve worked with Emma Lahana and we know what she can do, we’re going to present a Mayhem — and a character — unlike you’ve ever seen.

TVLINE | With a name like Mayhem, you’d think she’d be a villain, but in my research — again, not a comic expert — I found that she does a lot of good.
Yeah, she’s a little in the middle. The thing that excited me, in the most general sense, was the idea that if Tandy and Tyrone are choosing to be vigilantes, how do they react to the way that Mayhem operates? And how do they calibrate their own vigilantism, either away from or towards her?

TVLINE | Lastly, you’ve mentioned that this show has crossover potential. With the Runaways pilot airing after the Cloak & Dagger finale, that feels like a no-brainer.
That would be the easiest to me. I’m biased, because I really like the show and I’m a big fan of Josh and Stephanie’s. Plus, the idea of shooting anything in LA would be such a fantastic commute for once. All I can say is that there’s a lot of red tape — and green tape, and all sorts of other colors of tape — that we’d have to get over. I think fans of Runaways know that Cloak and Dagger showed up pretty early in the Runaways’ run, so there’s a certain Marvel karma that we hopefully can fulfill. I wish I came up with this term, but Tandy and Tyrone are the Rosencrantz and Guildenstern of the Marvel universe, they can show up anywhere.

Your thoughts on the Cloak & Dagger finale? Hopes for Season 2? Grade this episode below, then drop a comment with whatever’s on your mind.