Detective Harry Ambrose is back on the case in Season 2 of the USA Network anthology The Sinner, which returned on Wednesday night. While Season 1 of the drama focused on Jessica Biel’s Cora Tannetti, a young mother who committed a seemingly random act of murder, the second go-round is focused on Julian (Alex, Inc.‘s Elisha Henig), a 13-year-old boy who kills his parents on the way to Niagara Falls. 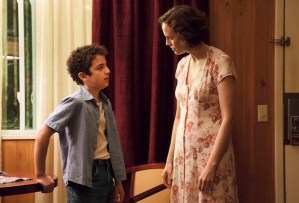 The crime itself is intense, and just as graphic as Cora’s lakeside stabbing sesh in Season 1. Julian and his ‘rents check in at the Rockford Lodge Motel after their car breaks down on the side of the road. The following morning, Julian brings both of them some tea, which we very quickly discover is toxic. Before long, Dad suffocates in the shower, takes a fall and suffers a fatal head trauma. Mom falls to the ground, convulses and chokes on her own vomit. Julian watches her die, then cleans up the mess. It’s some real Criminal Minds-level stuff.

The motel is located in Keller, N.Y., a small town once home to Det. Ambrose. Brief flashbacks hint at a childhood trauma involving Ambrose’s mother and a house fire, which we’ll presumably learn more about later. He’s called in to assist on the case by newly promoted detective Heather Novack (The Deuce‘s Natalie Paul). They visit Julian, who’s been placed in a foster home until charges are brought up. Julian’s lawyer escorts them to his room, where he’s seated in the fetal position. He acknowledges that his parents are dead and “had to go back… to the beginning.” When Novack asks for clarification (because seriously, what the heck does that mean?!), the kid begins making absurd noises, and his attorney insists they’re done here. Ambrose, meanwhile, notices a rash on Julian’s arm. 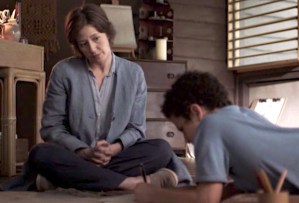 Later on, Julian is taunted by fellow fosters kids. This triggers a flashback to what appears to be some sort of therapy session with a woman (The Leftovers‘ Carrie Coon) whose identity is not yet revealed. There’s a machine with a flashing blue light, which makes a thumping noise every time the light flickers. Julian tells this woman about a day out at the lake. He was with a friend whose name was… I wanna say Vish? (Julian’s mumbling, so bear with me here!) Vish took Julian’s stick and made him angry, then Julian became “Shadow Julian.” In a second flashback, the woman tells Julian that “Shadow Julian” is the real Julian, and he has to learn to embrace him.

Afterwards, Ambrose and Novack return to the scene of the crime. They speak to the front desk clerk, who tells them that he saw Julian in the breakfast bar making tea on the morning his parents were poisoned, and in his hands were crumpled napkins. The breakfast bar leads to a back exit, where Julian is thought to have entered. Ambrose heads out and notices a jimsonweed plant, which is not only toxic if ingested, but causes your skin to break out if handled — hence Julian’s rash. Ambrose and Novack return to the foster home to confront Julian, who confirms he made tea using jimsonweed, knowing full well what would happen as a result. Ambrose tells Julian that he can help him now, but if he doesn’t open up soon, it’ll be too late. Julian replies, “My mother—” then stops. He sees a vision of a hooded figure, the same one he’s been seeing in his nightmares. Could it be “Shadow Julian”? Julian then turns to Ambrose and says, “Why can’t I go home?”

The following day, fellow officer Brickowski locates Julian’s family’s car. They are unable to find identification for the mother. The luggage, meanwhile, is brought back to the precinct for a closer look. Ambrose notices that there are no clothes or toothbrush for Julian. “What kind of parents go on a trip and don’t pack for their kid?” Novack asks. Well, turns out they aren’t his parents at all. As the episode draws to a close, the woman from Julian’s therapy session turns up at the precinct claiming to be his mother.

* Ambrose goes way back with Novack’s father Jack, who — fun fact! — is played by none other than Carrie Coon’s real-life husband, Tony- and Pulitzer Prize winner Tracy Letts.

* At one point, Jack reveals to Ambrose that his daughter is a lesbian. Only time will tell if this is at all relevant moving forward.

What did you think of the Sinner Season 2 premiere? Grade it via the following poll, then hit the comments and tell us if you’ll keep watching to see how the case unfolds.