NBC’s Reverie this Wednesday shed new light on the tragic day when Mara Kint’s sister, along with her niece, was shot dead by Ray. Was the twist surprising for you, or not as twisted as you imagined?

In the penultimate episode of Season 1, Mara’s run-in with a Chris “glitch” that morphed into Ray understandably had her spooked and wondering about her derealizations becoming stranger and more aggressive — to the point that she explored having her BCI removed, though that would mean ending her tie to Reverie (and a crestfallen Paul) forever.

Looking up Chris’ professional file, Paul deduced that Mara’s ex works at the same hospital where comatose Ray is a patient; as such, the “glitch” she encountered may be hinting that she is blocking out information about her sister’s death. But before they could act on this theory, a concerned Charlie arrived to drop on Mara a major truth bomb.

Sitting in his office, Charlie pulled out his cell phone and explained that before Ray shot anyone, when Mara was frantically texting Charlie to get the incoming police car sirens shut off, she accidentally called Charlie. Because she was bounced to his voicemail, everything that then transpired in Jamie’s apartment got recorded. As Charlie pressed play, Mara listened in on what really happened — how, after Ray shot the women, he didn’t immediately shoot himself. Rather, Mara worked her negotiator skills to convince him that, if what he really always wanted was to be with Jamie forever, he could have that by ending his own life. Which he then indeed tried to do, managing to only wing his frontal lobe, non-fatally.

As Charlie noted, Ray was going for suicide regardless. But now Mara knows she kinda egged him on. And armed with that new information, Mara enlisted Paul for an “illegal” op in which they hooked comatose Ray up to Reverie. Mara then also entered the bare-bones dreamscape, where she saw and confronted Ray just as the episode ended. 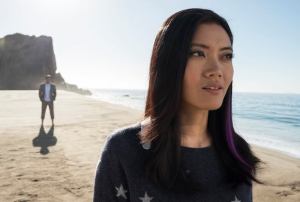 Elsewhere in the last episode before the finale, Oliver Hill — after sneaking himself into Reverie, then passing out at a bar — arrived at a hospital with the message “Deliver me to Mara Kint” scrawled on his chest. Mara took the bait and met him in his reverie, where he asked her to facilitate a forbidden meet-up with Alexis. Alexis in turn reluctantly agreed and met up with her ex, who celebrated her birthday with flowers and a “return” to their dream vacation in Paris (I think?). But Oliver it turns out was partly keeping Alexis in reverie long enough for his on-the-take OniraTech security guard to slip into her private chamber and steal her digital security key. When the guard later rendezvoused with Oliver to hand off the goods, he received a wad of cash — and a pair of bullets in his chest — for the effort!

What did you think of Reverie Episode 9?