The penultimate episode of The Originals brought Klaus & Co. back to where it all began, stirring up a minefield of emotions in the process.

Desperate to expel the darkness that’s slowly killing his daughter, Klaus took Hope back to Mystic Falls with Elijah to enlist the help of Alaric and Caroline’s twins; as Gemini witches, they possess the ability to siphon the evil magic from Hope’s body and put it into Klaus, the first part of a multi-step plan that would eventually end with Caroline casing Klaus in cement and dumping him into the sea. Easy peasy!

It didn’t take much to get Lizzie and Josie on board — Caroline’s promise of shorter uniforms, under the guise of “defying the patriarchy one plaid skirt at a time,” was enough to convince them — but Alaric proved a slightly tougher sell. “He still clouds your judgment,” Alaric told Caroline, reminding her that pumping one of the world’s most dangerous, unpredictable creatures full of evil magic might not be the smartest move. Point taken.

But Caroline became considerably less OK with Klaus’ plan when he revealed that, rather than spending eternity in the ocean, he intended to drive the last remaining white oak stake into his heart, ridding the world of the Hollow’s darkness — and of himself. “This would be so much easier if you’d just stayed the Big Bad Wolf,” Caroline told him. And if that little moment melted your heart, you must have been emotionally obliterated at the end of the episode when she said, “A part of me has always known you weren’t the villain in my story,” followed by the most tragic almost-kiss I’ve seen in a long time. If I was a ghost lurking around Mystic Falls, I would have pushed their faces together and held them there for at least two full minutes. We’ve earned that much. 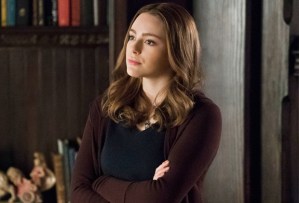 Meanwhile, Elijah was tasked with distracting Hope from her inevitable demise, letting her drive his Bentley and encouraging her to indulge in a “disturbingly decadent burger” from the Mystic Grill. (This episode was full of callbacks to The Vampire Diaries, from Sheriff Matt Donovan’s engraved park bench to Elena Salvatore’s medical practice, and I loved every single one of them.) It was during the eating of said burger that Hope came upon Landon Kirby, a downtrodden (and severely brooding) Mystic Falls teen with whom she developed an immediate connection, first by seeking magical revenge against the bullies who wronged him, then by sharing a dance with him in the town square.

But the episode wasn’t all fancy cars and cute boys for Hope. She briefly lost consciousness while out with Elijah, waking up in some sort of ancestral plane for werewolves. There she encountered Hayley, who encouraged her to fight for her life after forgiving her for everything that transpired this season. “I’m not dead because of you,” Hayley told her daughter. “I’m at peace because of you.” It was a beautiful scene for a lot of reasons — hi, Jackson! — and I realized I’ll never not get emotional when Phoebe Tonkin appears on my screen. Let’s just allow Hayley’s instructions for her daughter to sink in for a moment: “Make art. Use your voice. Have adventures. And have at least one totally epic love. And be every bit of yourself, because the very best of me is in you.” Beautiful.

Now for the moment we’d all been waiting for (slash dreading): Hope successfully transformed into a wolf under the light of a full moon and ran off into the forest, leaving Klaus to absorb the Hollow’s darkness and — unless Elijah and/or Caroline and/or the freakin’ ghost of Cami O’Connell can stop him — end his life with a prick of the white oak stake.

* Can I get a copy of Stefan’s journal at my local library? I’d read the hell out of that thing.

* Elena Salvatore, M.D. is absolutely a show I would watch.

Your thoughts on this week’s turn of events? Hopes for next week’s (gulp) series finale? Drop ’em in a comment below.