Don’t let the smile fool you: Katherine Heigl‘s Suits lawyer Samantha Wheeler is getting off to a rocky start with Zane Specter Litt COO Donna Paulsen.

In this Wednesday’s episode (USA Network, 9/8c), the new addition finally comes face-to-face with the redhead, and let’s just say the two women won’t be going out for drinks any time soon.

“We totally get off on the wrong foot… but they have to,” Heigl tells TVLine. “Samantha is not going to walk into any room and give anybody the benefit of the doubt. It doesn’t matter who they are. It doesn’t matter what they do. She’s kind of one of those people who assumes she has to manipulate the situation and the person involved.” 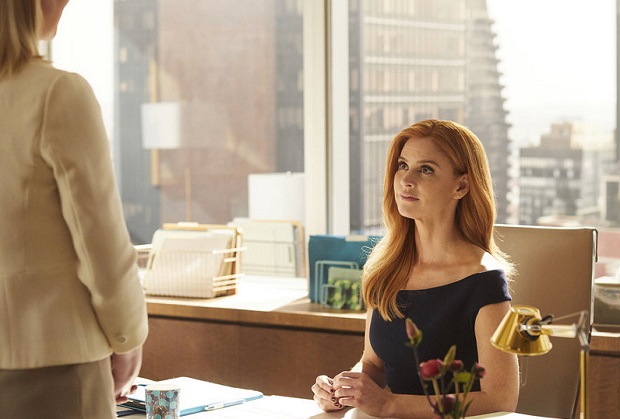 But in this case, the person on the other end is Donna, who is “so quick and so smart and so intuitive that she can’t be manipulated,” Heigl adds.

While Samantha may not be a fan of the boss lady, Heigl has nothing but kind words for both Donna and her portrayer Sarah Rafferty. “She’s my favorite [character],” the actress gushes. “I love her so much, and I think Sarah has done such a remarkable job bringing that character to life, because if you think about the first season, she was sort of peppered throughout, but now she’s indispensable. You can’t live without Donna. It’s not the show without Donna. So I was so excited for my scenes with her.”