Looking for a break from the sweltering July temperatures? You’re in luck: Hulu’s Castle Rock is now available to stream, and it’s bound to give you goosebumps.

Set in the titular (but fictional) town where Stephen King has based many of his published works, Castle Rock weaves together different locations and characters from King’s greatest hits, using them to set the stage for a new mystery in this Maine locale.

The horror-drama’s first three episodes landed on Hulu Wednesday morning; before you tell us your thoughts on the show, let’s break down what happened in the series premiere:

First, we’re treated to an origin story for one of Castle Rock‘s central characters, Henry Deaver. It’s 1991, and Henry — just a young boy at the time — has gone missing. That would be bad news by any standard, but it’s especially grim during Castle Rock’s bitter winter, when it’s unlikely that a child could survive such frigid temperatures for a few hours, let alone 12 days. But Sheriff Alan Pangborn (who has popped up in other King works like Needful Things and The Dark Half) is determined to find Henry, and he braves the cold to do so — with very lucky results.

After poking around in the woods for a while, Alan suddenly spots Henry standing in the middle of the town’s super-frozen lake, and he runs over to rescue him. There’s nothing visibly wrong with the boy, but he’s strangely not frostbitten, and he’s clutching an odd miniature statue in his palm, which Alan doesn’t see. Henry also claims not to remember anything that happened to him during his week-plus off the grid, but Alan doesn’t seem to buy it — and we later find out that no one in Castle Rock bought that story in ’91, especially when Henry’s dad had been found dead just a few days before Henry was rescued.

Meanwhile, in 2018, a different mystery is unfolding in the town. After retiring from his 30-year gig as warden at Shawshank State Prison, Dale Lacy (Lost‘s Terry O’Quinn) commits suicide; on the morning of his last day at work, Dale heads to the lake — strangely, the same place where Alan rescued Henry all those years ago — and ties a noose around his neck before driving his car straight off the bluff, for reasons that no one can really understand. 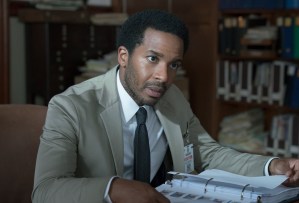 Enter a new warden (played by Ann Cusack, Better Call Saul), who inherits the corrupt mess that is Shawshank. (Among other fun Easter eggs for Stephen King fans, there’s a nod to The Shawshank Redemption upon New Warden’s arrival, in which she’s told that her office still features the bullet hole that resulted from Warden Norton offing himself in the film.) Given that the prison is already squeezing more bunk beds into each cell than it should, New Warden decides to re-open Block F, which was closed after a fire in the ’80s — and suspiciously remained closed under Lacy’s leadership.

But when correctional officer Dennis Zalewski (Shameless‘ Noel Fisher) is asked to brave the creepy Block F in order to count its beds, he finds something unsettling: Someone has been visiting this section of the prison, based on the footprints there that lead to an enormous old water tank. Unfortunately for Zalewski, he drops something down into the dark tank — and when he goes down the ladder to retrieve it, he finds a folding chair, an enormous can full of cigarette butts… and a gaunt man sitting in a cage.

There’s a whole lot of questions surrounding the man (played by Bill Skarsgård, who already put his horror chops on display as Pennywise in the recent It remake): What’s his name? How did he get into Shawshank unnoticed? And how long has he been there? (Given that the cigarette butts found in that dungeon match the butts in Lacy’s ashtray, it seems likely that Shawshank’s former warden had something to do with this guy getting locked up.)

The only time the man speaks during Castle Rock‘s premiere, it’s to say a name: “Henry Deaver. Henry Matthew Deaver.” That’s when we catch up with present-day Henry, who is now an exhausted-looking death row attorney in Texas. Despite the New Warden wanting to keep Mystery Man’s appearance on the DL, Officer Zalewski calls Henry and urges him to come to Shawshank to help the man. But when Henry arrives to meet his new client, New Warden stonewalls him, conveniently offering to let him flip through a log of Shawshank’s inmates that she knows full well doesn’t include the man from the tank. “If this was a goose chase, I hope you’ll accept my apology,” she says, despite organizing said goose chase.

Later that night, Zalewski is keeping an eye on the security cameras in his cell block. (Well, kinda, if you count his periodic glances in between reading and drinking coffee.) But when he does look up, he notices that the mysterious man has somehow left his cell — and he’s on the move. On another security feed, the man is seen sliding a door open in a dark corridor. He walks closer and closer to the camera, then looks directly at it as the lights in the hallway come on — and Zalewski watches, horrified, as he realizes there are multiple men now lying dead in the cell block.

In the final scene of the premiere, we see a flashback to the man’s time in the water tank — and, as New Warden had suspected, Dale Lacy is indeed the person smoking cigarettes next to the man’s cage. “When they find you,” he tells the man, “ask for Henry Deaver. Henry Matthew Deaver.” With that, he grabs his lantern and returns up the ladder into the prison.

OK, your turn. What did you think of Castle Rock‘s first episode? Grade the series premiere in our poll below, then hit the comments to back up your choice!