Kristin Kreuk has come home — in more ways than one. The Smallville and Beauty and the Beast vet returns to The CW in Burden of Truth, a Canadian legal mystery series that made its stateside debut on Wednesday.

Kreuk’s character — corporate lawyer Joanna — has gone back to her roots, too. Hoping to impress a potential client, she travels to her tiny hometown of Millwood, where female high school students are experiencing seizures and tics after getting the HPV vaccine. But rather than trying to protect the girls, Joanna is representing the big company responsible for manufacturing the shot. “No filter. No conscience. God made you the perfect lawyer,” Joanna’s dad/boss (CSI‘s Alex Carter) tells her. (Is that supposed to be a compliment?!) 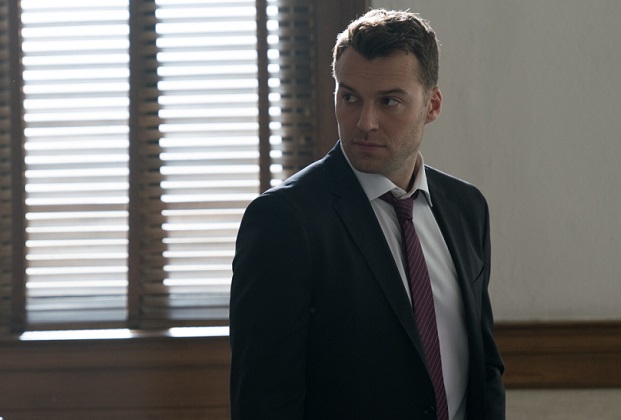 On the other side of the courtroom is Billy (Rookie Blue‘s Peter Mooney), a former classmate — but not an ex-boyfriend, it seems — who has taken on the students’ case. Billy and the rest of the townspeople are surprised that Joanna is back, especially given the abrupt and sudden way her father made them leave in the middle of the night. And if that detail doesn’t make it clear enough that something went down, a woman punches Joanna after she finds out her dad’s identity.

When not getting into bar fights, Joanna goes about offering the girls a deal: The company isn’t admitting fault… but sign this document, waiving your right to ever sue, and you get $50,000! Then Billy’s niece Molly (Sara Thompson) also falls ill, and the investigation takes a turn. Molly didn’t get the vaccine — she didn’t think she needed it since she’s in a relationship with another girl — so something else must be at the root. That’s good news for Joanna, because now the company doesn’t have to pay out. In response, one of the sick girls accuses the lawyer of basically being soulless.

“Your job is to screw people over. Good, hardworking people!” she exclaims. “And you saw me, and you thought, ‘Well, she’s just a sick kid. She’ll agree to anything.’ How can you live with yourself?!”

That slap in the face is just what Joanna needs to come to her senses and partner up with Billy to track down the source of the seizures.

What did you think of Burden of Truth? Grade it via the poll below, then hit the comments to back up your pick!