Did someone call for a metahuman exterminator?

American Pie vet Chris Klein is joining The Flash Season 5 in the series regular role of DC supervillain Cicada, TVLine has learned. The announcement was first made on Saturday during the series’ annual panel at San Diego Comic-Con.

Per The CW, Cicada is a “grizzled, blue-collar everyman whose family has been torn apart by metahumans.” He views the rise of metas as an epidemic, and seeks to exterminate them one by one. He’s the show’s second non-speedster Big Bad, following Season 4’s The Thinker.

In DC Comics lore, Cicada starts out as David Hersch. 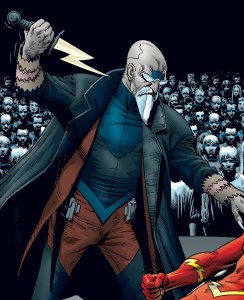 After murdering his wife in a thunderstorm, he attempts to take his own life, only to be struck by lightning, which in turn gives him the ability to absorb the life force of others. During the jolt, he has a vision signaling his own immortality and the eventual resurrection of his wife.

Klein is of course best known for his role as Chris “Oz” Ostreicher in the American Pie film franchise. His TV credits include Wilfred, Welcome to the Captain and select episodes of Franklin & Bash, Raising Hope, Motive, The Good Guys and The Grinder.

The Flash returns for Season 5 on Tuesday, Oct. 9 at 8/7c, leading into the Season 2 premiere of Black Lightning.

Your thoughts on Klein’s casting? Drop ’em in a comment below.