Julia Roberts‘ Homecoming is right around the corner.

The half-hour Amazon drama from Mr. Robot creator Sam Esmail is set to premiere on Friday, Nov. 2 on the streaming service, it was revealed at San Diego Comic-Con. The series, which is adapted from the podcast of the same name, is described as a mind-bending thriller centered on Heidi Bergman (Roberts), a former case worker who used to help soldiers transition from the battlefield to civilian life. Years later, living with her mother and working as a waitress, Heidi is questioned by the government about why exactly she changed careers.

Plus, Amazon revealed the official poster for the series, along with an ominous minute-long teaser — which you can watch above — set to Radiohead’s “Everything in Its Right Place.” The camera pans through a series of empty rooms before settling on Roberts in her therapist’s chair, facing an unseen patient and asking, “Shall we get started?” 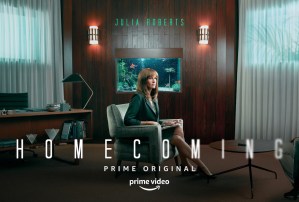 Hit PLAY on the trailer above, then tell us if you’ll be checking out Julia Roberts’ first significant TV gig this fall.