Had Tuesday’s Animal Kingdom been broadcast in Smell-O-Vision, its scent would have been a mixture of pie and flop sweat. Because although the freshly-sprung Smurf was quick to whip up something tastier than prison food, its aroma was soon overwhelmed by the panicked perspiration of the guests at her welcome-home dinner. Who sat down for what they could only wish would be their last supper? Read on.

‘WE HAVE LIFTOFF’ | As “Incoming” began, Frankie succeeded in getting a crated-up Deran and J past pot-farm security to be loaded onto the same plane as almost a million bucks. Once the tag team was in the air, the heist was, metaphorically speaking, nothing but clear skies — until, that is, the duo missed their drop point and parachuted into the desert almost 50 miles from their pickup spot! Luckily for them, they happened upon a home in the middle of nowhere, its owner a mother of two who was willing to give them a ride into town (and toward cell reception) for $10k. And honestly, they couldn’t get this job over with fast enough to suit Pope. Jonesing for a fix, Billy spent the morning driving him extra crazy, prompting him to recall the time that Deran’s father had locked him in a closet — and forgotten him for three days! Finally, Billy went too far, suggesting to Craig that the reason Pope had worn diapers till he was 6 was that he’d liked having Mommy’s hands down there. Pope had even watched Billy and Smurf have sex. “That was some twisted s—,” declared the junkie before Pope pulled over, hurled him out of the getaway car and left his ass behind. 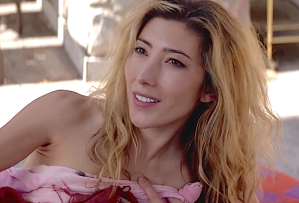 ‘I’M A MOTHER… MOTHERS DON’T RETIRE TILL THEY’RE DEAD’ | Meanwhile, Pearce used his brief stint as Smurf’s Lyft driver to get in her head by suggesting that her family might not be as thrilled as she expects to have her back. She’d set up a damn slick operation, he pointed out — one that J & Co. could now run without her. Once home, the ex-con met Frankie, who was relaxing poolside, having completed her part of the heist. Before Smurf’s head could explode over the fact that her boys were “out” with Billy, Frankie turned the charm up to 11, taking charge of the laundry, running the ex-jailbird a bath and pouring her a vodka and cranberry. All of which seemed to help… or had it? “Hey, Frankie,” said Smurf. “Do you always come on this strong?” En route to pick up Deran and J, Craig remarked that Pope was acting weird. “That’s just my personality, bro,” he replied before admitting that OK, he’d been feeling like Baz was being forgotten… and wondering about some vague new intel that fingered Smurf as his killer. 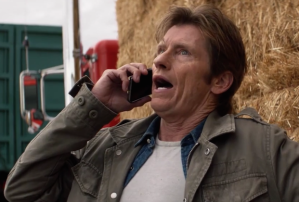 ‘WE JUST ROBBED A GODDAMN PLANE!’ | When Billy made his way to a rest stop and phoned Frankie, Smurf answered instead. “Surprise,” she hissed. Since Billy wasn’t with Smurf’s boys, where were they? “They had to… uh… go someplace,” answered Billy, proving that he’s the worst liar since Pinocchio. Before hanging up, Smurf got in a quick threat: “Billy, I can’t wait to see you.” (I know, it doesn’t read like a threat. But the way Ellen Barkin said it, of course it was!) While that was going on, Deran, Craig, J and Pope stashed the bulk of their haul in a storage unit with an electronic lock (that would text each of them anytime the door was opened) and walked away with $9k each to get by. Billy, naturally, couldn’t have his share — having already ripped off a pot dispensary, he’d draw attention if in the wake of the heist he was suddenly seen around town flush with cash. “What about Lena?” Pope added. “What about her cut?” Though I don’t recall the little girl being especially helpful on, or even aware of, the job, the Codys agreed to cut her in. 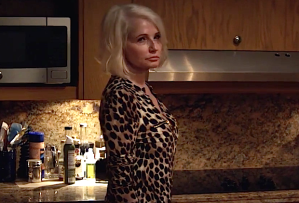 ‘GIVE YOUR MOMMY A HUG’ | No sooner had Billy made his way back to Deran’s bar than he’d stuck his son with paying his cab fare and tried to hit on bartender Kai. “Your dad needs your attention,” she told her boss when he came back inside. And truer words have rarely been spoken. Billy was wired, careening from warnings about how nuts Pope is to asking, “Do you think you could ever call me dad?” (Deran’s perfect response: “No. Is that a joke?”) Eventually, Billy got to the most important matter at hand: Could he, uh, crash at the bar since, oh, didn’t he mention, yeah, Smurf’s home. As Deran’s tan faded at the thought, Billy went on about how Smurf answering Frankie’s phone “almost ruined my high. Almost.” At that very moment, Pope, Craig and J were arriving at Casa Cody — to find Smurf cooking a welcome-home dinner. Delighting in J’s discomfort, she purred, “It’s good to hold you again, baby” before kissing him on the lips and asking if he’d missed her. And the way she said she wanted to see Lena the following day gave me a feeling that she might be likelier to take the kid from Pope than Child Protective Services. 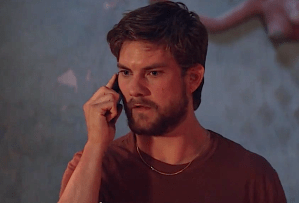 ‘DUDE, SHE EVEN MADE A PIE!’ | During a quick phone call with Craig, Deran was chagrined to hear that even he had visited their mother behind bars. “She’s gonna kill me,” said Deran (and maybe not metaphorically, either). Reeling, he was in no mood to listen to Billy insist that he understood — “you were hoping you never had to see her again.” When Deran countered that Billy wouldn’t understand, because he’d bailed way back when, his dad revealed that he’d actually taken him when he split. But Smurf called the feds, and once Billy was picked up, she said she’d only drop the kidnapping charges if he left and never came back. (It seemed to really get to Deran, too — by the time Billy was done telling his tale, there was a tear shining in his son’s eye.) 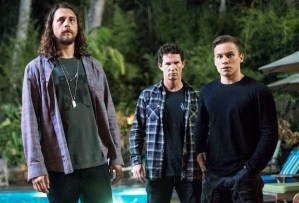 ‘REST IN PEACE, BEAUTIFUL BOY’ | When Smurf sat down to supper with Pope, Craig, J and Frankie, the atmosphere was so tense, even the flies on the wall didn’t want to be flies on the wall. After some nastiness about how J hadn’t really been in love with Nicky, so no big loss, Smurf got to the point: How was their day — as in, how was the job she hadn’t known s— about? “Don’t tell me I baked that pie for nothing,” she said. When all she got in response was crickets, the temperature dropped another 20 degrees. “Oh, I see,” she said. “Your job, not my business.” You’d have thought everybody would’ve been relieved when she changed the subject… only she changed it to Baz’s grave. Upon hearing that there wasn’t one, they’d had a paddle-out instead, Smurf said they’d have to change that since Lena needs a place to visit her father. “And so do we,” she added, raising a glass to the “son” who’d robbed her blind and sent her to prison.

So, were you satisfied with the awkwardness of Smurf’s reunions with Pope, Craig and J? Does anyone not think the woman who gave Deran and J a ride will factor back in? And if Smurf didn’t order the hit on Baz, who did?