After a surprise announcement — and a few very public complaints — Sacha Baron Cohen‘s top-secret Showtime comedy project Who Is America? made its debut on Sunday night. But did it live up to the hype?

Fans of Cohen’s Da Ali G Show (where characters like Borat and Bruno originated) will recognize the basic format of Who Is America?: It’s a mockumentary that purports to examine America’s cultural landscape through a series of hard-hitting interviews… but is really just an excuse for Cohen to don a series of ridiculous new disguises and fool people into embarrassing themselves on camera. 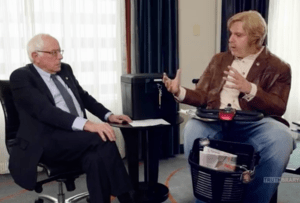 The first new Cohen character we meet is Dr. Billy Wayne Ruddick Jr., a scooter-riding, America-loving conspiracy nut who spouts his uninformed opinions on his website, Truthbrary.org. (Instead of “Library”… get it?) The premiere opens with Ruddick cornering an unsuspecting Bernie Sanders (!) for an interview, where Ruddick complains about Obamacare and claims he only uses the scooter “to conserve my body’s finite energy.” The biggest question we’re left with: Why in God’s name would a U.S. Senator agree to sit down with this person?

Cohen then switches sides of the political spectrum for his next character: a staunchly liberal, ponytailed professor who heads to South Carolina to chat with a pair of Trump voters over dinner. After starting the meal with a “First People chant” of nonsensical grunts, Cohen’s character tells the Trump fans about life “in my yurt” with “my son Harvey Milk,” who’s not allowed to urinate standing up. It’s actually incredible how polite and understanding his dinner hosts are, especially when he begins detailing his wife’s affair with a… dolphin? 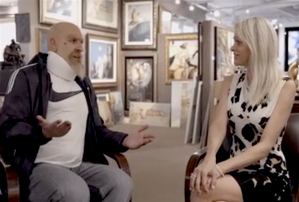 Next, Cohen sports a bald head and goatee to play freshly released prison inmate Rick Sherman, who visits an upscale art gallery to show them the art he created while behind bars. He didn’t have many materials to work with, though, so he painted using his own feces and, um, other excretions. But shockingly, the gallery’s representative Christy actually likes it! She’s a bit of a kook, seeing a bit of “genius” in Rick’s unconventional methods and even donating several of her own pubic hairs to add to his paintbrush made of them. Sell those portraits, Rick, and don’t look back!

Finally, we see Cohen as Colonel Erran Morad, a former Israeli intelligence agent and self-declared “anti-terror expert.” He has a radical idea to stop the rash of school shootings in America: Don’t just arm the teachers… arm the students, too! His “Kinderguardians” program puts firearms in the hands of kids as young as 3 — but don’t worry, the guns are dressed up in cute animal disguises.

The scary part is, Erran gets an alarming number of Americans to happily endorse his program, from gun-rights advocate Philip Van Cleave to former Senate Majority Leader Trent Lott to sitting Congressmen Dana Rohrabacher and Joe Wilson — both up for reelection this fall! — to conservative radio host Joe Walsh. (No Sarah Palin, though. Maybe that’s next week?)

Give the Who Is America? premiere a grade in our poll below, then hit the comments to share your thoughts.