As far as we know, in eight seasons of The Walking Dead, fan favorite Daryl has never gotten laid. Like, not even once. So when TVLine recently spoke with the AMC drama’s new showrunner Angela Kang, we had to ask: Will Norman Reedus’ solitary character finally get some loving? 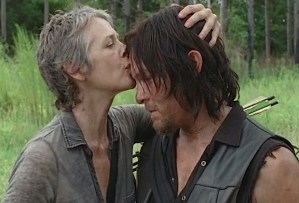 Once Kang finished laughing at the question, she slyly avoided giving a direct answer. “What I will say,” she offered, choosing her words carefully, “is that we will be telling a great story with Daryl this season. He has some really meaty material coming up, so Daryl fans will get their fill.”

Even if the biker doesn’t end up with someone’s arms wrapped around him as he makes tracks between Alexandria and the Hilltop, there’s almost certainly relationship drama in store for him. After all, Season 8 concluded with Daryl conspiring with Maggie and Jesus to “show” Rick how wrong he’d been to spare Negan.

Going forward, “the show deals a lot with the bonds between the core characters that have formed over the course of years. There is love between them,” Kang said, “but these are also complex relationships. They’re family.”

What do you think? Would you like to see Daryl in a romantic relationship? Or would you prefer that he remain the lone rider we’ve all come to know and love? Hit the comments.