For a series that follows the stars of a shallow and campy wrestling show, GLOW sure knows how to pack an emotional punch.

While the show’s focus may be on the trials of the Gorgeous Ladies of Wrestling, that does not mean the men are spared any heartbreak. The dramedy’s sophomore run takes Chris Lowell‘s Bash for quite a ride — and a painful one at that.

The second season, which premiered on Netflix in late June, starts with Bash in a happy and healthy place. His show has a venue, a solid time slot and a steady stream of revenue. However, GLOW quickly throws Bash into a tear-jerking wrestling match against his own identity, sending him on a personal journey as he begins to come to terms with his homosexuality. What starts with the discovery that good friend Florian is gay and has died of AIDS develops into an impulsive, fear-induced marriage to Rhonda, a clear sign that Bash has not yet accepted who he is.

GLOW never formally confirms that Florian and Bash are gay, or the exact nature of their relationship. Instead, the series relies on context — Bash flexing in front of a mirror decorated by photos of his favorite male wrestlers or weeping by the pool while his home is power-cleaned after Florian’s death — to communicate the character’s confusion and fear of being alone, something Lowell said concerned him a bit at first. 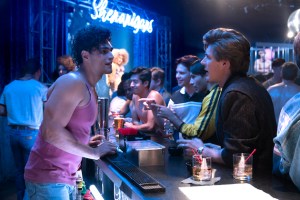 “[What was] impressive was how subtly and effectively they were able to deliver such a blow,” Lowell told TVLine. “We were all a little bit intimidated how it was going to come across and having seen the episodes now, I just am really proud of the work that everybody did.”

Lowell had a lot more to say about Bash’s journey when he stopped by TVLine’s New York Office. Read on to get more of the actor’s thoughts on Bash’s painful loneliness, the audience knowing more than his character does and the surprising (yet worrying) end-of-season wedding.

TVLINE | When it comes to Bash figuring out his sexuality, it comes with a subtlety, almost like the abortion episode from last season.
Yeah. With the abortion episode from Season 1, I think that was something that, on any other platform on any other show, would be the center plot point. It is dealt with in a way that isn’t an end-all, be-all, definitive moment in this woman’s life and she can’t ever be the same again. With the abortion episode, what is so powerful about it is they took a lot of this weight away from it. They took a lot of power away from it in a good way.

TVLINE | It wasn’t a very special episode. It was just something that happened in her life. And it’s the same with Bash here. But we also learn that he clearly doesn’t want to be alone. He jumps right into the marriage with Rhonda at the end of the season.
What is also fun about it is there’s something really great about the audience being ahead of the character a little bit. I think it’s in Episode 5; Bash realizes that Florian’s gay when he goes to the gay bar. Then he comes home and his family’s butler is sort of trying to help him through whatever he’s going through. Then he goes into his room and he sees all these, you know, half-naked, chiseled, greased-up men, and I think he still can’t see what other people are maybe seeing.

TVLINE | Right.
There’s something really wonderful about watching something and being ahead of the character and realizing things before he’s even able to realize it. That’s something that kind of happens a lot of this show in a way that’s really rewarding for an audience.

TVLINE | Wrestling is one of the few ways in our culture that men are allowed to touch each other and not have it be weird, which fits so well with what we know about Bash and how much he loves the sport.
Yeah. I agree. It feels very seamless. It doesn’t feel like a plot point that they tried to force into this character, into this world. Bash doesn’t know how to feel about all of it. He feels terrified and ashamed and scared and panicky, and I think that’s what leads him to jump into this last-minute marriage to Rhonda… It’s a fun ending (With reporting by Kim Roots)