You could call Katherine Heigl a Suits fangirl. In fact, the Grey’s Anatomy vet was such a huge lover of the USA Network drama, she sought out creator Aaron Korsh to collaborate on a different project, but eventually wound up with a series-regular gig on Season 8.

Similarly, Heigl’s character — Samantha Wheeler, a lawyer who makes her entrance in the Wednesday, July 18 premiere (airing at 9/8c) —  is “just willing to go there,” the actress describes. “Whether she’s afraid or not, she’s going to do it, and I think that’s the definition of courage. She’s not always right, and sometimes her methods are a little shady, and sometimes she’s shady. But she’s really good at her job.”

Below, Heigl talks about her “amazing” experience on the long-running series and previews Samantha’s combative relationship with Specter Litt (including boss Harvey). 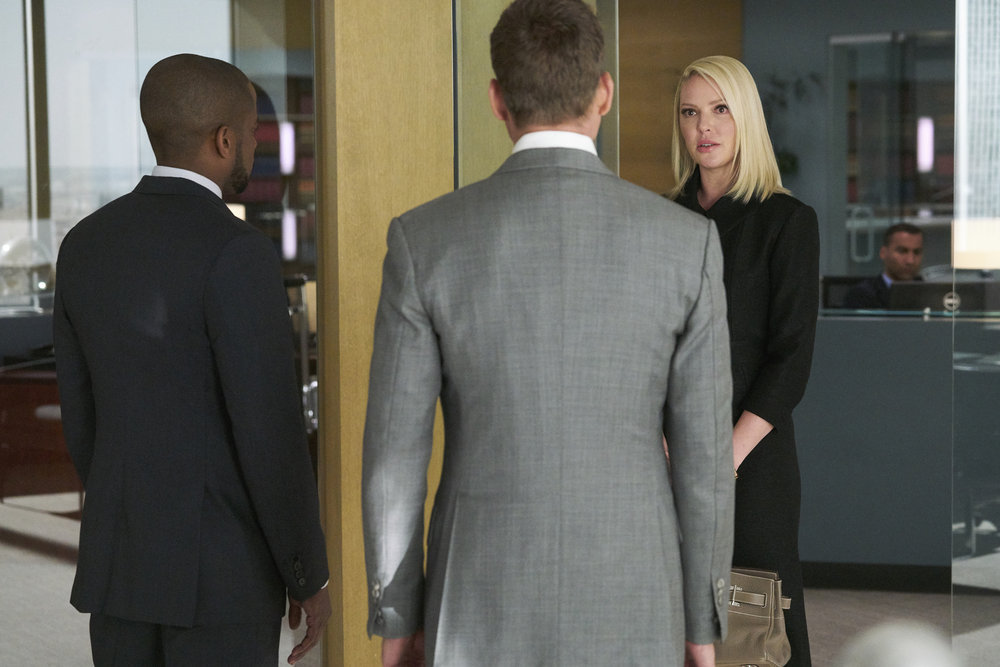 TVLINE | I was talking to [creator] Aaron [Korsh] the other day, and he said you called up, wanting to be on Suits.
That’s right! [Laughs] I actually started bingeing it probably, gosh, a couple years ago. A friend of ours up in Utah was like, “You’ve got to see this show.” My husband [Josh Kelley] and I are always looking for something we can watch together and enjoy together that’s not really Gilmore Girls for him or the Tour de France for me. So Suits was our perfect hang-out-in-the-evening, binge-watch show. My mother, who’s also my producing partner, fell in love with it, and it was her suggestion that we reach out to Aaron and see if he was available to maybe help develop some projects I [had] going. At the time, we didn’t know that they were going to do an eighth season, and he kind of on the down low told us, “Well, we’re actually prepping for that.” I was like, “Do you need a tall blonde, perhaps? Because I’m available.” [Laughs] So it worked out. He was so lovely about including me and creating a character for me to come in and play. It’s been amazing.

TVLINE | How much input did you have into shaping who the character would be, since technically, he was writing for you?
The beauty of something like this is that because I’m such a fan of Aaron and his writing and what he does, I didn’t feel the need to input much. It was like, “I can’t wait to see what you do.” At the top of those sort of conversations, I would say like, “Oh, I don’t know, it could be fun to play a female version of Louis Litt. Or maybe I play a woman who comes in and directly challenges Donna’s ability to intuitively know everything.” But what he ended up creating was so much more interesting than what I was suggesting.

TVLINE | Just like Samantha, you’re coming into a community of people who have been together for a very long time. What was that experience like?
My initial nervousness was like, “Yeah, I’m walking into a family situation.” These people have been working together for seven years, very closely, and inevitably, under those circumstances, you become really close to one another. I was nervous about being the new girl, but they were so incredibly embracing. Everybody reached out to me by phone or email when it was announced that I’d be doing the show to just welcome me. I spoke to Rick Hoffman for two hours; that was our introduction, over the phone. Two hours later, I was like, “Dude, I’m so sorry I just commandeered two hours of your life.” [Laughs] Everybody’s just been so gracious and lovely and excited to have me here — and I get to share that excitement, because I’m so excited to be here.

TVLINE | You’ve done predominantly broadcast series in the past. On cable, have you noticed a difference in terms of what you can do and say and get away with?
Yeah. Now they’ve got us throwing down a “f–k” here and there, which I was like, “Really?! We can do that?” I guess I maybe did in The Ugly Truth say a few choice words, but I’ve never had the opportunity in television. It feels kind of naughty. I always feel like, “Ooh, can we do this?” and they’re like, “Go for it.” I’m like, “OK!” 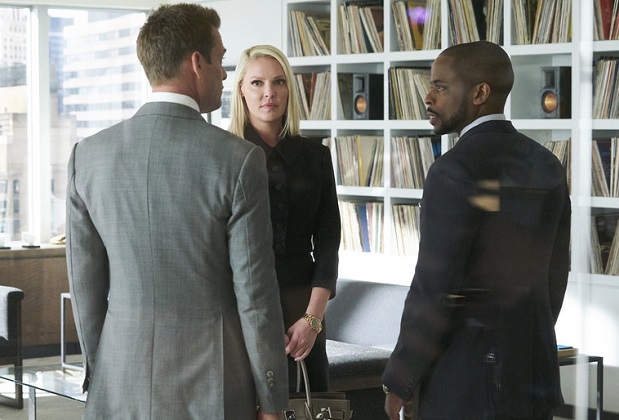 TVLINE | What does Samantha think of Specter Litt — and what do the people at Specter Litt think of her?
Initially, Samantha comes in thinking she’s there to be Robert [Zane]’s right-hand gal and take care of whatever he needs taken care of, to push him to the top. Her loyalty is to him through and through, and he has to make it clear to her at a certain point, “No, we’re a team here. Your loyalty has to be to everybody. You’ve got to show everybody what you show me.” That’s something she has to work on because she’s not terribly trusting of people, and she’s very suspicious and wary.

But as the season is progressing, I can see how her attitude is shifting to one of real deep respect for everybody there. There are confrontations, there are arguments, there [is] seeing things in totally different ways, but she’s starting to understand that despite the fact that those things happen and she has a different opinion on a lot of stuff, these people are to be taken seriously and are really good at what they do. So there are relationships and bonds starting to form. That’s really fun, to go from basically having none of those relationships to the beauty of watching them unfold.

TVLINE | Samantha and Harvey have quite a combative spark right from the start, but in a way, they’re also very alike. Is there more than just a professional competitiveness there?
I don’t think so; not as far as I’ve seen yet. I don’t know what Aaron’s planning, but at this point, I think it is because they’re super similar in their styles, and they’re both cocky confident. They butt heads a lot, because she’s not going to take any s–t from anybody, and she’s not going to be bossed around by anybody even though he’s her boss. That really rubs Harvey wrong because he’s thinking, “Hey, fall in line. There’s a pecking order here. You’re not calling the shots. I am,” and she’s just like, “No. The only person I listen to is Robert Zane.” So there’s a lot of conflict in that. But then, like I said, they have these moments of real connection and really seeing the value in one another — just the raw, instinctual ability to do what they do well.