The air was thick with the stench of death on Wednesday’s episode of The Originals. And while that might sound like a typical afternoon in this show’s version of New Orleans, it was the who more than the what that made this hour a true game changer.

In fact, let’s just break this episode down death by death:

IVY | I was pretty sure we’d seen the last of Vincent’s lady love last week, so imagine my excitement when Ivy appeared fully conscious at the top of the hour… followed by my sense of dread when I realized [1] that she and her fellow witches must have died with vampire blood in their systems, and [2] Ivy’s the type who would rather die a witch than “live” as a bloodsucker. Sure enough, that’s exactly what she told Vincent, staving off his impending grief by assuring him that the ancestral well is a beautiful place to spend eternity. (Frankly, “honeysuckle” isn’t the scented candle I’d choose from Bath & Body Works, but to each their own.) Unfortunately, Ivy’s faith was a little misguided; as Vincent explained, the witches of New Orleans have been drawing so much magic from the well that its inhabitants are… well… remember those soulless goobers Ursula kept trapped in her cave in The Little Mermaid? Those are basically what the ancestors have become. In the end, Vincent convinced his fellow spell casters to relinquish their claim to the well, freeing the ancestors and allowing Ivy to truly cross over in peace. 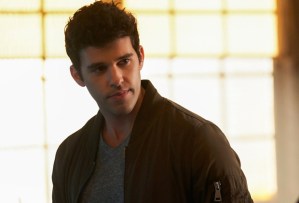 JOSH | This one hurt a lot more than I expected, even if I started mentally preparing myself when a handsome stranger hit on Josh at work, only to be turned down because he reminded him too much of Aiden. (Anytime someone starts talking about a dead ex they haven’t mentioned in a while, it means one of two things: Either that character is about to join their loved one in the afterlife, or the ex is about to return from the dead — and the way this season is going, my money was on the former.) Sure enough, Josh was stabbed with a needle full of Marcel’s fatal venom during a rescue mission. Saving Marcel cost Josh his life, and you’d better believe I teared up at his and Marcel’s respective goodbyes. Of course, I should have saved the waterworks for Josh’s very last scene, which reunited him with Aiden (best cameo!) in the great beyond.

This also feels like a good time to dig up the message I made Colin Woodell record for Josh (as Aiden) the day after his character’s death in Season 2:

–
…BILL? | In a frustrating twist of fate, Roman — the one person I wanted to die this week — managed to survive the tragic hour. Even after Klaus gift-wrapped him for her, Hope couldn’t bring herself to use Roman as a punching bag for her (literal) inner demons. Instead, she unleashed her supernatural fury on the Nightwalkers, whom Elijah and Antoinette tricked into meeting them at a church. It was actually a brilliant plan, though it blew up in everyone’s collective face when they realized that Declan had been in the church. He survived the blast (phew!), but the same can’t be said for his friend Bill, who was trapped beneath the wreckage of Hope’s wrath… and his death triggered the moment we’ve all been dreading: Hope’s werewolf side has been awakened.

* How are we feeling about Elijah and Antoinette? They had my full support when they first met, but so much has happened since then. Like, I’m trying to make peace with the part she unknowingly played in Hayley’s death, but it’s not easy — even if Elijah doesn’t appear to have too much trouble forgiving her. I’m not saying that I hope she disappears after leaving for Shanghai, but I also wouldn’t be upset if these two ended the series apart.

* Guys, there are only three more episodes of this show left! How did this happen?! I thought I was ready, but I am not.

Your thoughts on this week’s killer episode? Hopes for the series’ final three? Drop ’em all in a comment below.