Insatiable‘s circuitous road to your screens will end on Friday, Aug. 10, when the beauty pageant dramedy releases its freshman run of 12 episodes via Netflix. 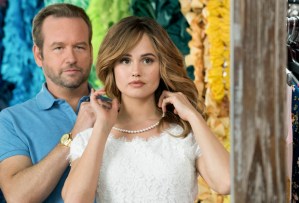 Originally developed for (but passed on by) The CW, Insatiable follows Bob, a disgraced and dissatisfied civil lawyer-turned-beauty pageant coach (played by The Walking Dead‘s Dallas Roberts) as he takes on his client a vengeful, bullied teenager (Jessie‘s Debby Ryan) who is out to exact revenge on her tormentors.The series’ cast also includes Alyssa Milano (Charmed) as Bob’s wife Coralee, while and Christopher Gorham (Covert Affairs) will play Bob’s pageant-dad nemesis Barnum.

Watch a teaser trailer below:

Among other fresh fare, Netflix previously announced that Anne With an E will release Friday, July 6; Tony Goldwyn (Scandal) will star in Chambers, a supernatural drama about a young heart attack survivor who becomes consumed by the mystery surrounding the heart that saved her life; an anthology series inspired by the music of Dolly Parton is in the works; and the long-stagnating, oft-attempted adaptation of the Locke & Key graphic novel has received an official pilot order at the streaming service, with former Lost boss Carlton Cuse set as an exec producer.