Tuesday’s pivotal Animal Kingdom left the jailhouse rocked! After Smurf learned that she’d been assigned a new cellmate — ack! Alvarez! — the last thing the queenpin expected to happen did! And no, I don’t mean her getting a shiner from the convict that she’d framed — that, you didn’t have to be “half psychic” like Frankie to see coming! What went down? Also, did Nicky survive? And which characters got together for the hookups-of-the-week? Read on… 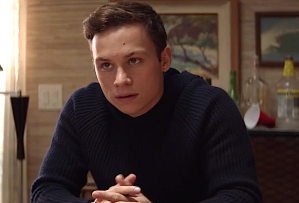 ‘WHY ARE WE TAKING A JUNKIE ON THE JOB?’ | As “Low Man” began, J was so busy mopping up Nicky’s blood that he forgot all about the recon meeting he was supposed to attend with his uncles — thereby giving Billy yet another golden opportunity to talk him down to Deran. While the teen dealt with Nicky’s dad — who cared at least enough to fly in from Guam to holler much too late, “You will never see her again,” etc. — Billy suggested that he, not Smurf’s grandson, be the fourth on the pot-farm heist. Pope in particular was not cool with that idea, especially on, as he put it, “the most complicated job we’ve planned without Baz.” Craig argued that Billy was just “a dope fiend. He’s not exactly Osama bin Laden.” But that was kinda Pope’s point: Billy was at times too messed up to turn a freakin’ doorknob without first watching a YouTube how-to. In the end, Deran promised to handle his father by giving him busy work. He’d also, as Pope demanded, get rid of sometime accomplice Colby, who’d become as much a fixture outside the bar as a parking meter. That settled, Pope secretly took off for Mexico to find out what new information Lucy claimed to have about Baz’s murder. 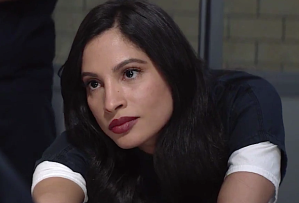 ‘YOU GOT A NEW CELLMATE’ | Later that day, Morgan warned J that he’d better visit his grandmother. With the D.A. dangling options in front of Smurf, this was the worst possible time for her to feel alone. After all, “she starts making deals,” the lawyer said, “who do you think is the most expendable?” Meanwhile, in the pokey, Garcia presented Smurf with a shiv to protect herself from Alvarez. Uh, isn’t it your job to protect me? Smurf asked. Aw, hell no, Garcia replied. She got paid to sit with Smurf at lunch. To get between her and some bitch with a blade, that would cost a lot more! Cue Smurf returning to her bunk to discover that Alvarez wasn’t just back in genpop but her new cellmate in 3, 2… At the bar, J apologized to Deran for missing the meeting and informed him that Nicky’s dad was taking her back to Guam. Did the teens break up? “I think so,” said J. Think? Really? Dude, you left her scared, high and bleeding outside the ER. Yes, you broke up! What are you, Craig now?!? During a break from their heist-planning, J asked Deran if he though Smurf would ever talk to the cops. Nah, Deran replied. “The only person she would’ve rolled on is Baz, and he’s gone.” 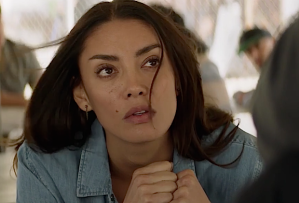 ‘YOU DON’T TOUCH SMURF!’ | In Mexico, Lucy and Marco took Pope to meet with a guy from L.A. who’d gotten busted south of the border, and just happened to have heard about a murder in Oceanside. According to the inmate’s intel, “a rich white lady” had ordered a hit on the son who’d stolen from her. Yeah, right, said Pope afterward. He suspected that Lucy had paid the dude to throw him off her scent. After all, if Smurf wanted anyone dead, she would’ve come to him! “She killed Baz,” argued Lucy, “and you know it!” And it appeared that, in spite of Pope’s threats, Baz’s girlfriend was ready to exact revenge. Not that Smurf wasn’t already suffering. When she met with Pearce, she was sporting a black eye. Desperate — and sure that Pearce was behind Alvarez’s relocation to her cell — Smurf offered to do three years in a minimum-security prison — “Donovan, preferably,” so she could see Lena. And what would he get in return? “You get my boys.” 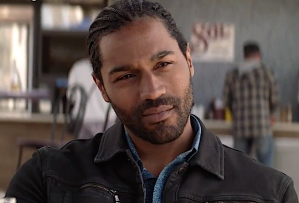 ‘SMURF SHOULD MAYBE START CLEANING UP HER OWN MESS’ | At Casa Cody, Mia told J that she’d heard from a friend at the hospital that Nicky was out of surgery and would still be able to walk. But there was bad news, too: The fee to protect Smurf had doubled. Just tell Pete I don’t have the money, said J. “I’m tired of being her errand boy.” Rather than let J make a move like that that he wouldn’t be able to unmake, Mia suggested he think it over for a day. She’d cover for him since “I don’t want Pete to take a bat to that pretty little face.” Speaking of pretty little faces… Linc was on a date with Deran, asking about talk that his mom was in prison, when who should say hello but Adrian. He’s “a surfer that I sponsor,” said Deran, adding a capital A to the already-awkward moment. Not that he needed to, really. Adrian isn’t the flipping-tables type, and Linc later made it clear that it was no big deal; Deran wasn’t the only person he’d ever slept with, either, after all. 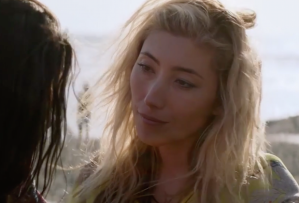 ‘WHAT OTHER PEOPLE THINK OF ME IS NONE OF MY BUSINESS’ | While out stealing a getaway SUV with Billy, Craig was over and over again intrigued by Frankie, who besides being “half psychic” appeared to have mad criminal skills. Once the two of them were alone, their flirtation intensified. And why not? She wasn’t with Billy, she explained. He was just a ride. And she was fascinated by Craig’s aura, which said, “Don’t look at me, I’m the dumb one.” It also said that he was a follower, not a leader — except at sex. And “you have to be smart to be good at it,” she added, since “good sex is spiritual, psychological… ” Needless to say, the two had locked lips before the scene was over. While that was going on, Smurf showed a visiting J her new black eye. “That’s what happens when you don’t answer my calls,” she hissed. But he was done being her gofer. In fact, he insinuated that she should stop issuing orders and start expressing thanks, because, “if I stop coming, you’re gonna die in here.” (Talk about the wrong time to play hardball with Grandma!) From there, he went straight to the garage where Mia works and got himself a, uh, tune-up. 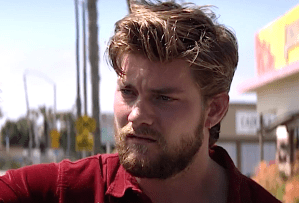 ‘CONGRATULATIONS, YOU’RE GOING HOME’ | At Smurf’s next sit-down with Pearce, he told her that three years at Donovan wouldn’t cut it; she could go there, but would have to do eight-to-10 — and she’d have to give him real crimes on her boys. At that, Smurf broke into a wicked smile. If he was offering her an eight-year vacation, his star witness was obviously as solid as a Slushee. In other words, no deal — she’d take her chances at her hearing the following day. Meanwhile, Deran paid a visit to Adrian, who razzed him about his stiff introduction to Linc. “We always sucked at timing,” Adrian admitted. And, before we knew what hit us, they were making out. The next morning, Smurf was stunned to find out that she wasn’t going to any hearing — she was getting sprung! When she found Pearce waiting for her outside the prison, she couldn’t resist poking him about the charges against her being dropped. “Man, that’s gotta hurt.” Nonetheless, he offered her a ride, even opening the front door of his car for her. Naturally, she got in the back seat like a taxi passenger! Finally, Deran and J donned oxygen masks to be smuggled into the pot farm in crates — the Codys’ next heist was underway!

So, what did you think of “Low Man”? Will anyone really miss Nicky? Craig and Frankie — hot or not? Do you believe Smurf ordered the hit on Baz? And who will get it worse when she gets home — J or Billy? Hit the comments.