During its two-hour series finale Friday, 12 Monkeys arrived back at the beginning.

We’ll go over all of the time-traveling craziness with EP Terry Matalas below. But first, a semi-brief recap: After getting engaged, Cassie and Cole launched a plan to stop Olivia from unleashing the Red Forest. To execute it, they enlisted Ramse (from before his death) and also got an unexpected assist when Old Jennifer brought an early version of Deacon into the fight. While Cole and Ramse drove into Titan to the tune of “(I’ve Had) The Time of My Life,” Cassie splintered half of Olivia to 894, where her remains became the source of the virus. However, when it came time to turn off the machine and save humanity, Cassie hesitated, not wanting to lose Cole, who begged her to give their relationship “an ending that makes it real.” The plea worked — but the hardest part was still to come. After exchanging tearful goodbyes, everyone was returned to their year of origin as Jones succumbed to radiation poisoning. Cole then launched the sequence to erase himself from all the timelines.

Back in 2013, Cassie returned to normal life as a doctor but started to regain memories of her adventures with Cole. As for the others, Jones was living with her husband and daughter after the reset, Ramse was reunited with his son, Jennifer finally bioengineered a unicorn, and Deacon opened a bar with his brother.

Then, in a surprise twist, Cole woke up in the Keys, where Jennifer — still a primary, Matalas confirms — revealed that Jones had tinkered with the code so that this very last version of him would be spit out somewhere, because time owes him one. With that, Cole set off to reunite with Cassie, finding her at their old home. “Time passes how it’s meant to. All that matters is now. Happily ever now,” his voiceover declared as the tearful couple embraced, a red leaf blowing in the wind.

Now then, here’s Matalas to dissect Cassie and Cole’s surprisingly happy ending, the meaning of that (ominous?) red leaf and much more. 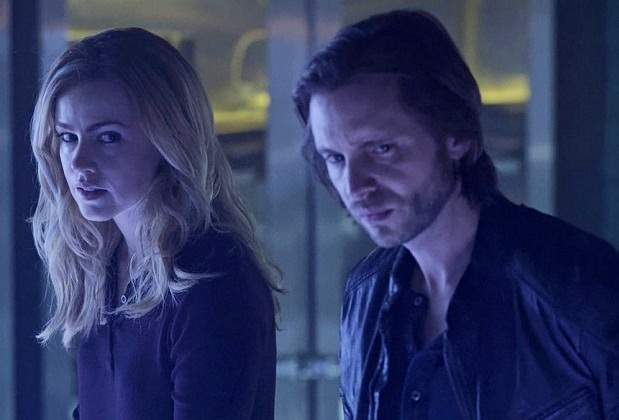 TVLINE | What did you want the show’s final message to be?
I think it’s all there in Cole’s last voiceover. In a lot of time travel, there’s always talk about the past and the future. But 12 Monkeys talked about how important now is. You have the opportunity to pick up the phone right this very minute and tell somebody that you love them, or you can see them. It’s just something we take for granted. It’s just an important philosophy and an interesting one to come at through the epic, sprawling nature of time travel.

TVLINE | As I was watching the finale, I was bracing myself for a heartbreaking end to Cassie and Cole’s story. But instead, they got a “happily ever now.” How did you arrive at that conclusion for them?
Back in Season 1, I remember telling people, “Here’s how it’s going to end. You’ll think he’s been erased forever, but he’ll find his way back to her in the very, very last moment of the series.” It’s a show that totally could have had a bittersweet ending, and we really make you think it’s going to be that until the coda. But I love a happy ending, and it feels earned, that everybody could live happily ever after. But there’s another way of looking at it, too. You can certainly look at the last image of the show, that red leaf, and ask yourself, “Did Cassie really turn off that machine in Titan? Is something else going on here?” The right ending is the one you choose.

TVLINE | You brought up the red leaf before I could ask you: Was it a bad omen, or a hint of something more sinister?
Like I said, it’s up to you. Is it fall? Or is it something more? I leave that up to the audience. I know what my answer is, and I also know what other people’s answers are. It’s up to you.

TVLINE | Do you care to share your answer?
My ending? They save the world. But there are others in the writing staff who believe that they might be in the Red Forest, and those people have dark souls. You need to print that. 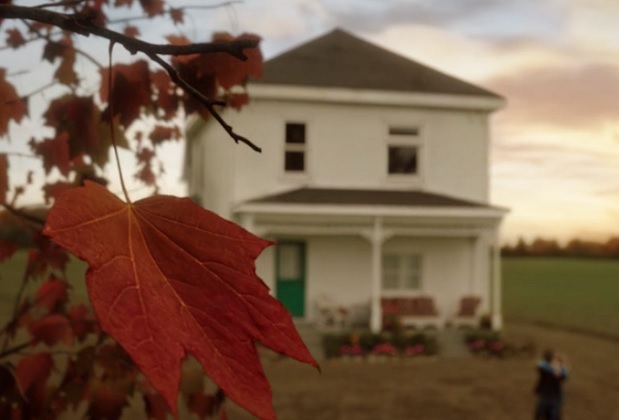 TVLINE | You could have ended on that image of them embracing, but you did choose to include the red leaf.
Well, it’s the most iconic image of the show, the red leaf. And the red leaf in the Red Forest symbolized the message, which is the importance of now. That is, after all, what the 12 Monkeys were looking for. So either way, happy or tragic, it’s still the right image to end the show on.

TVLINE | When Cassie goes back to 2013, how much does she remember? Or is it more that she’s just being haunted by an echo?
I think it starts as an echo and [ultimately] she remembers everything. Clearly, Jennifer [remembers]. Clearly, Jones does. Should the episode have kept going, they all would have found themselves finding each other again and reminiscing about their years of adventures. 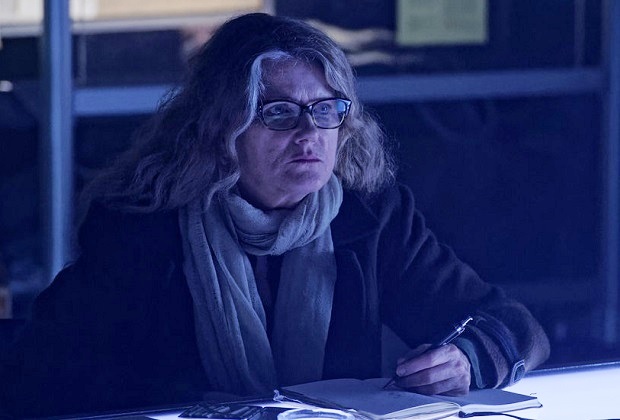 TVLINE | So Jones’ little smile at the end was a signal that she remembers what she did to save Cole?
Yes. Absolutely.

TVLINE | Are there consequences for Jones breaking the laws of the universe?
I guess that would be a question for Season 5. So if you can make that happen, we’ll discuss it.

TVLINE | Was Olivia truly The Witness?
If you are referring to the true Witness being that which causes the Red Forest, then that depends on how you view the end of the series. The Alpha Primary in medieval times said to Olivia that they’ve “always known the true Witness would bring about the Red Forest because she fears loneliness. Nothingness.” If you believe that Cassie did not turn off Titan’s central spire, then you could argue Cassie is the true Witness by that definition. If you believe Cassie and Cole saved the world and lived to see that result, then your answer is it was Olivia.

TVLINE | You brought Deacon into the fold at a much earlier point in his timeline. So the Deacon that we first met when the show began knew about time travel, and Cassie and Cole, and the whole shebang?
No. We saw a first run of Deacon where he didn’t know. Then in Episode 407, when he’s in Titan, and he sees the West VII symbol, and he gets the idea of the West VII coming for a last battle at Titan, he has a bloody nose. At that moment, he becomes the Deacon who has lived through this cycle. And the same with Old Jennifer. You see Old Jennifer get a bloody nose in 407, too. Now she knows what she has to do. So in 408, when he gets his head cut off, a few scenes earlier, he says to Cole, “Things are coming to a head,” basically broadcasting that he knew what his fate was going to be and that this Deacon knows the end of the series.

TVLINE | How did you come up with the “(I’ve Had) The Time of My Life” song cue?
We needed a perfect song for them to go out in a blaze of glory. I think maybe the first option was going to be Journey’s “Don’t Stop Believin’,” and Journey said no. And thank God they did, because it’s just not nearly as good. So then I was just brainstorming what would be the perfect song, and I actually think I have that song on my iPhone just because I’m really cheesy, and I played it in my car. I was like, “Oh, my God, that would be perfect!” So I had the editors lay it in, and we just laughed and laughed and laughed and said, “Let’s try and get it.” To our delight, they said yes. 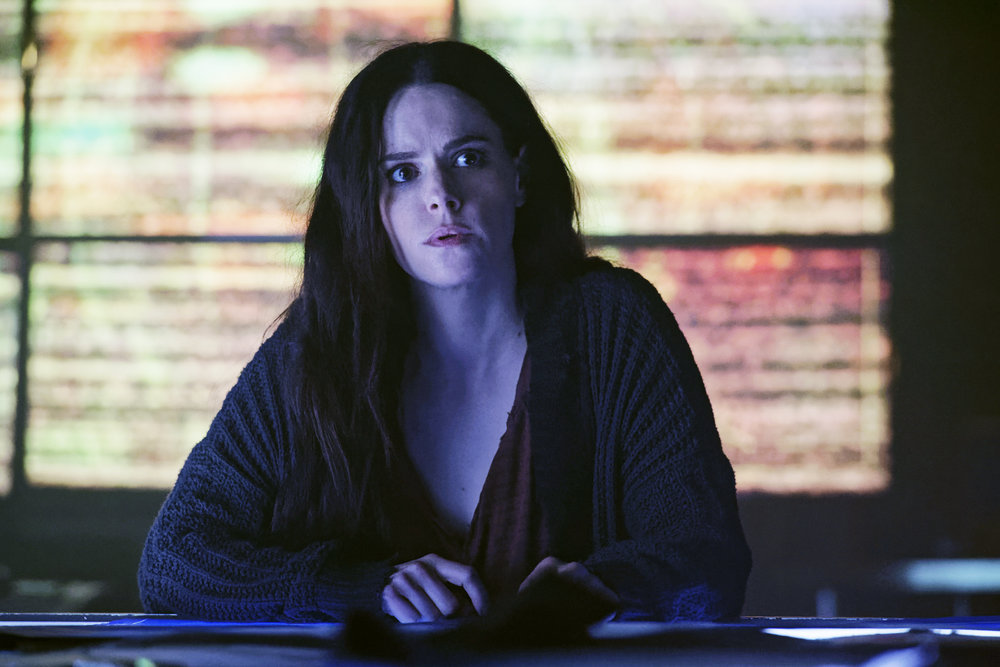 TVLINE | There are many great goodbyes and moments in the finale. Is there one that stands out for you?
Oh boy, they all kind of get me. When Jennifer says goodbye, and she has that special look to Cole, and then she looks at the machine and says, “See you, old girl,” that always is a real punch to the stomach. I also really love the last shot of Cassie, like a crane shot, where she’s just sitting at the house, and she’s talking, and she says, “See you soon.” But also, Cole and Ramse are fantastic, and Deacon has a great last scene with Cassie. They’re all special to all of us who were putting that finale together.

12 Monkeys fans, what did you think of the series ender? Grade it via the poll below, then hit the comments to back up your pick!