Toward the end of Tuesday’s Animal Kingdom, Nicky only wanted one thing from J — and no, it wasn’t that. “You just have to promise me that you won’t let me die,” she said. Unfortunately, it looked an awful lot like that was going to be a promise he couldn’t keep. WTH happened? Read on…

‘I DO WANT YOU HERE’ | As “Broke From the Box” began, J and Nicky put their relationship back on relatively solid ground. He even told Mia that they shouldn’t hook up anymore. Which was fine by her. But, she couldn’t resist adding, Nicky didn’t belong in J’s world. If he gave her a reason to remain there, “whatever happens to her is on you.” Cue Nicky’s fascination with Billy’s smack habit growing…  Meanwhile, in the clink, Smurf was rattled to learn from Morgan and Goodwin that the ADA had a surprise witness to Javi’s murder. So, before you could say, much less text, “Get here now,” she was face to face with her grandson and ordering him to track down Javi’s guys — according to the little flashback we got, the same ones who’d beat up and nearly drowned J. Exactly “what are you asking me to do?” the worried teen asked. “What I tell you to do,” replied Smurf, going so far as to remind him that she’d been there for him when his mother OD’d. 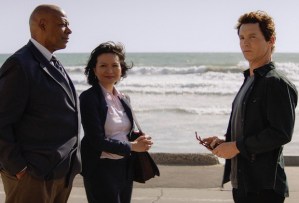 ‘I’M HAPPY… EVERYTHING IS OK’ | As Pope’s day began, he thought that his biggest problems were going to be helping Lena with her fractions and finding her a shrink. However, he’d thought wronger than wrong. Off a report from Lena’s school about her “incident,” the Department of Child and Family Services came calling and confirmed that the little girl wasn’t living with a blood relative, just Baz’s “brother.” Afterward, Pope warned Lena never to tell people like them or doctors the truth. “They seem like they wanna help you,” he said, “but they don’t.” At the same time, Deran and Craig were surfing with Linc. Even as dense as he is, Craig picked up on the fact that Linc is gay. “If I knew you wanted to bang him,” joked Deran, “I wouldn’t’ve made a move.” The outing wasn’t just gnarly waves, though. Craig was disturbed to discover that a crew new to Oceanside had been making trouble everywhere they went. (And we all know that’s the Codys’ shtick!) After driving over the interlopers’ boards, Craig played Hardy Boy and found out from surf-shop proprietor Maurizio that the guys were Brazilian coke dealers who liked to show up where nobody was looking and take over. 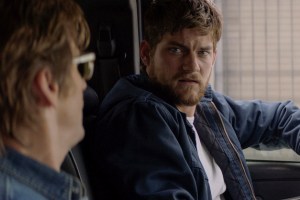 ‘LOOK AT YOU, MR. BUSINESSMAN’ | Later, Billy stopped by the bar to propose a job to Deran: If they hit a pot farm at which he’d briefly worked — before being canned for predictably sampling the merch — they could make off with $60-80k in cash. It didn’t sound bad… except that Billy gave every indication that he was as inexperienced at big jobs as J had been when Smurf took him in. Back at the Codys’, J was so distracted by fears over his assignment from Smurf that he told Frankie, sure, whatever, she and Billy could move into the house. (That’ll go well.) When he admitted to Nicky what Grandmommy Dearest wanted him to do now, she suggested, “We could leave… They don’t want you here any more than they want me.” Alas, he couldn’t… or wouldn’t. Speaking of Smurf, she turned a whiter shade of pale upon being informed by inmate Garcia that Tina had been sprung. But so long as J kept paying, Garcia would keep Smurf safe. Even though, she noted, “Tina kinda liked you. I don’t.” 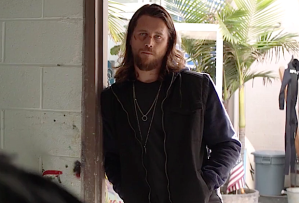 ‘PUBLIC RELATIONS HAS SUFFERED’ | After Craig scoped out the Brazilians’ place, he recruited his brothers and J to “tune them up.” They had no choice, Craig said, because if they couldn’t stop other crews from moving into Oceanside and take care of their “town s—,” it would bring heat down on them. One problem: Pope had Lena with him, so he couldn’t participate. He would drive the getaway car, however — with Lena in it, it turned out! Before J joined the guys that evening, Nicky made the mistake of getting on his last nerve. “It’s not my fault your family doesn’t want you around,” he snapped. “Jesus, can you blame them?!?” Off that hurtful exchange, while J, Craig and Deran roughed up and robbed the Brazilians, Nicky helped herself to some of Billy’s heroin, then dazedly danced around with a gun until she’d shot herself in the leg! When J got home, he found her collapsed in a pool of her own blood in the garage, and raced her to the ER… Sorry, make that the ER doorway. In spite of her plea not to let her die, he dumped her right outside the hospital and took off!

So, whatcha think? Is this the end of Nicky? Is anyone not dying for Smurf to get out of jail? And does anyone else suspect that Lena might actually be living with a blood relative — as in, Pope’s her dad?