Warning: Reading the following will spoil the surprise of GLOW Season 2, Episode 8 — and trust us, you want to be surprised.

In “The Good Twin,” GLOW let out the show within the show, body-slamming our brains not with the Netflix dramedy we know and love but, rather, its version of the K-DTV cheesefest whose production it chronicles. And even now, weeks after previewing the installment, I can’t tell if it was sublimely ridiculous or ridiculously sublime. Either way, of one thing, I am sure: It’s an insta-classic. Here are but a few of the reasons why: 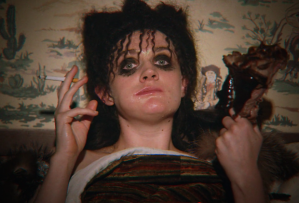 1. The production’s motto seemed to be, “If it sounds too bonkers to put on the air, goat for it!” | Nothing, and I mean nothing, was too goofy to get thrown into the mix — from Zoya the Destroya’s titular sibling with the bum foot and a Dorothy Hamill ’do to Sheila the She-Wolf’s unfortunate date with a handsy (hoofsy?) goat.

2. Its “Let’s put on a show without even a shoestring budget!” enthusiasm was impossible to resist. | My favorite make-something-out-of-nothing moment was Liberty Belle’s discovery of the safe in which her darling Savannah Rose was imprisoned: a locker in the wrestlers’ changing room with the word “safe” taped to it. Cheap and, ironically, priceless. 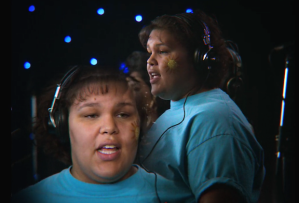 3. For us 1980s fanatics, it was a totally tubular flashback. | Particularly LOL-worthy was “Don’t Kidnap (Kidnapping Is Wrong to Do),” the off-key “We Are the World”-style group number — complete with Sheila sporting Stevie Wonder shades — that Machu Picchu organized in response to Zoya’s abduction of Liberty Belle’s daughter. Sample lyric: “Let the children run and play, and the ones you got, let them get away!”

4. The little things amounted to a big deal. | And I don’t just mean the fact that the episode included commercials for Howard-O’s, Welfare Queen’s action figure and Quilting Bee Easy, either. (Although that was genius!) Rewatch, for instance, the scene in which Zoya’s twin Olga surprises Liberty Belle in the shower, and you’ll see what I’m talking about — especially if you keep a close eye on Olga’s hand as it reaches for the shower door.

What did you think of “The Good Twin”? Grade it in the poll below, then hit the comments with your favorite bits.