Friday’s batch of 12 Monkeys episodes led viewers to believe that James Cole’s mom was The Witness’ daughter Emma before revealing that the mystery mama was actually time-traveler Hannah (played by Brooke Williams)! Yes, Jones is Cole’s grandmother. Let that sink in for a moment. 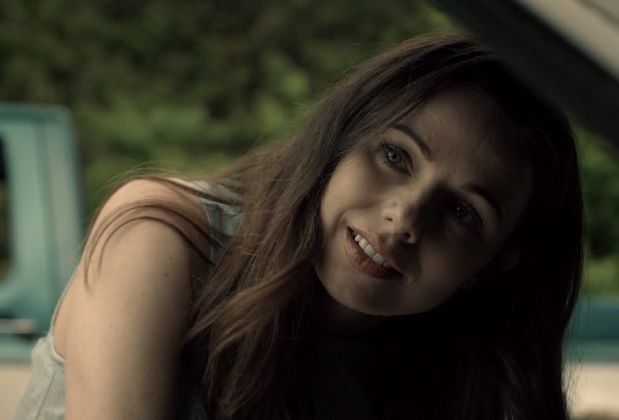 The twist was set into motion when Jones sent her daughter Hannah to 2009 to gather information on Cole’s mom Marion Woods and to find out how she knew the legend. What she found was Emma living under the alias, leading Hannah to assume that she would one day become Cole’s mother. However, while the two were on the road, they were ambushed and forced to seek help at the trailer of none other than Cole’s father Matthew. He took a wounded Emma to the hospital and then returned with the bad news that she had died. But Marion lived on… in the form of Hannah, who took on the name and fell in love with Cole’s dad, eventually giving birth to his son.

In 2018, as one of The Witness’ men was about to shoot Cole in New York’s JFK airport, where the virus was released, Hannah took a bullet for him and saved his life. “It’s OK. This was my choice. This was all I could do. Be here. Protect you one last time,” she explained, bleeding out in Cole’s arms. It was then that Hannah’s earlier words — “Mothers die for their children. Yours died protecting you” — came back to him, the realization dawning on his face. “I never wanted any of this for you,” Hannah added before taking her final breath.

Later, Cole found a letter from his mom, detailing her relationship with Matthew and why she ultimately left Cole with his dad. (Short explanation: fate of the world and all.) “Thank you, James. You saved my life when I was a child. You saved my soul when you were born,” she wrote. “I was, in my life, proud to be a Daughter. But proudest to be your mother.”

While the mother reveal came as a surprise to Cole, it was actually in the works “from the beginning, from Season 1,” showrunner Terry Matalas tells TVLine. “From the moment we mentioned Marion Woods, I knew. In fact, on Brooke’s first day, I told her, right after she was cast. It was something that was always planned. And if you go back and watch the series, you can see many hints of that throughout.”

12 Monkeys fans, what did you think of the show’s mother of a twist? Hit the comments with your thoughts!