In addition to serving up some compelling performances (and downright mesmerizing scenes, oft featuring Alfre Woodard), as well as a fearsome physical foe in Bushmaster, Season 2 of Marvel’s Luke Cage also packed some needed punch when it came to visiting “Defender” Danny Rand. 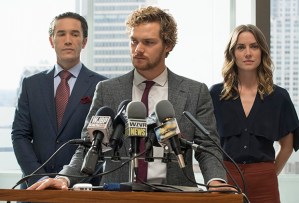 In Season 1 of his own Netflix series, Danny (played by Finn Jones) was… a lot. Out of necessity. He returned to New York full of (and yet weirdly stingy with) exposition, much of it incredible. He was offbeat (with his mop top and bare feet) and unconventional, a far cry from the quite urban heroes we had met in Daredevil, Jessica Jones and Luke Cage Season 1. Perhaps most frustratingly, he never quite sold us on his prowess as the Immortal Iron Fist, Protector of K’un-Lun, Sworn Enemy of the Hand. 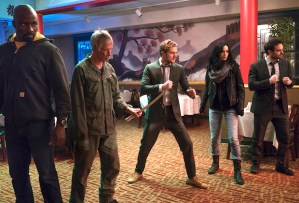 Netflix’s first team-up event, Marvel’s The Defenders, seemed to take those early digs at Danny and have a bit of fun with them, often through the lens of Matt Murdock, Jessica and Luke meeting every mysticism-filled proclamation with some semblance of an eye roll, or at least understandable disbelief. And on a more serious note, Defenders at one point also paused to have Luke make note of the privilege/power into which Danny was born, long before he earned additional cred by vanquished Shou-Lao. Over the course of those eight episodes, Danny gradually “fit in” with the others — Iron Fist was critical to the limited series’ denouement, after all — but still came off as a bit of an odd bird. 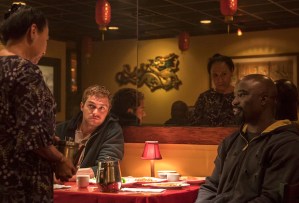 With his visit to Harlem for Episode 10 of Luke Cage Season 2, however, Danny’s bumpy introduction was behind him, and as noted he now has a “stillness” about him (as well as a cleaner ‘do). That sense of chill came in handy as he helped Luke — whose temper was starting to boil over, corrupting his sense of self in the process — learn to find his “flow” in the face of peaking threats from Bushmaster and Mariah Dillard. On the fisticuffs front, the would-be Heroes for Hire teamed up for a group melee that came to explosive and abrupt end once they perfected their “Patty Cake” merging of fist and force. All told, you really felt Power Man and Iron Fist start to gel as a mighty one-two punch.

Remaining an undercurrent through it all, though, was Danny’s incredible past, though now he was allowed to be in on the joke as Luke’s enterprising associate D.W. stood mouth agape over each and every detail, from Danny’s Immortal Iron Fist “branding” to the very real dragon of it all (though Luke himself remains steadfastly skeptical of the latter).

As Episode 10 drew to a close, with the two Defenders seemingly consuming all the Chinese food, I found myself glad for Danny’s visit — in part because of how he helped Luke get back on the rails, but also because it pointed to a more promising Iron Fist Season 2. (Now if only he could learn a roundhouse or flying kick or two….)

What did you think of Danny’s drop-by?